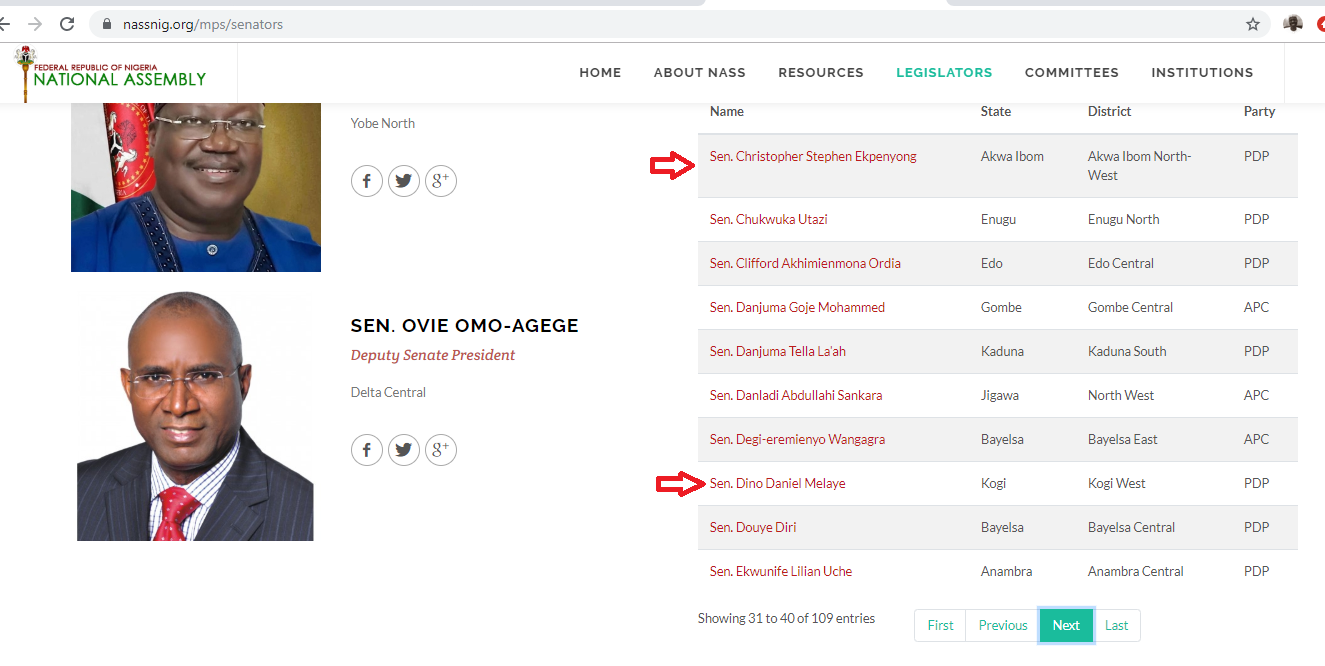 Long after being sacked from their positions by the courts, some politicians elected into the 9th session of the Senate have their names still on the official roll call of Nigerian senators.

Days of scrutinizing the website of the National Assembly show that at least seven senators who are not supposed to be on the list have their names among the 109 on the website.

Six of the seven senators have been sacked by courts in various judgments, while the seventh died almost a month ago.

Benjamin Uwajumogu, who passed away on December 18. is also yet to be removed from the list of the Nigerian senators.

Prominent among those still occupying the nominal roll are ex-Zamfara governor Abdulaziz Yari, Dino Melaye who represented Kogi West and Adedayo Adeyeye who was briefly the senator for Ekiti South.

Others sacked by the courts are Abubakar Tambuwal, Tijjani Kaura and Christopher Ekpenyong.

Of the six sacked senators, five have already been replaced by others while one is awaiting election rerun to determine if he will retain his seat or not.

Never in the Senate

More shocking of the gaffe is the case of Messrs Yari and Kaura, another politician from Zamfara, who never took oath into the 9th Senate.

Both Messrs Yari and Kaura had their elections nullified by the Supreme Court in a landmark judgment which sacked all Zamfara candidates of the All Progressives Congress (APC), for improper primaries. They had not been inaugurated before their sack.

Of the three Zamfara senators-elect affected by the Supreme Court’s May 24 2019 judgment, only a former minister, Ikra Bilbis, has his name replaced with that of the actual occupant of the seat, Hassan Gusau.

Sacked by the court and defeated at a rerun, erstwhile senator representing Kogi West, Mr Melaye, still has his name as the representative of the Okun people in the Senate, as against Smart Adeyemi who took over the seat on December 4.

On October 11, 2019, a Court of Appeal panel in Abuja affirmed the decision of the election petitions tribunal to sack Mr Melaye from the upper chamber. The court ordered a rerun election.

At the end of a hard-fought election, Mr Melaye lost to his arch-rival, APC’s Mr Adeyemi, who was defeated for the seat by Mr Melaye in 2015.

In Sokoto, Abubakar Tambuwal, who was sacked by the Court of Appeal in October has remained on the Senate’s list. The court ordered INEC to issue certificate of return to Ibrahim Danbaba, of the Peoples Democratic Party (PDP).

Though he has since assumed his legislative duties, Mr Danbaba is yet to have his name replace that of Mr Tambuwal on the website.

Adedayo Adeyeye, who was sworn in at the inception of the 9th Senate to represent Ekiti South Constituency was sacked by the Court of Appeal on November 6, 2019 and replaced with PDP’s Abiodun Olujimi.

But while Mrs Olujimi has taken her seat in the Red Chamber, her name is yet to be listed among the senators on the Senate’s webpage which still carries Mr Adeyeye’s name.

Another name still on the Senate list is Bassey Ekpenyong, a senator facing a rerun election after he was sacked by court in November.

Mr Ekpenyong who was declared winner of the Akwa Ibom North-West senatorial seat following the February 23, 2019 election was sacked by the Court of Appeal panel sitting in Calabar on November 9, 2019.

But the senator’s name still fills the slot of the Akwa Ibom North-west slot in the Senate.

Calls put through the known telephone line of Senate spokesperson, Godiya Akwashiki, did not go through for days as the number remained switched off.

A text message sent to the line requesting for clarification on the misnomer was also not replied up to the time of filing this story.

Also, Janet Mambila, director of information of the National Assembly Service Commission (NASC) did not answer repeated calls put across to her on Thursday.

Why I killed my pregnant girlfriend – Suspect