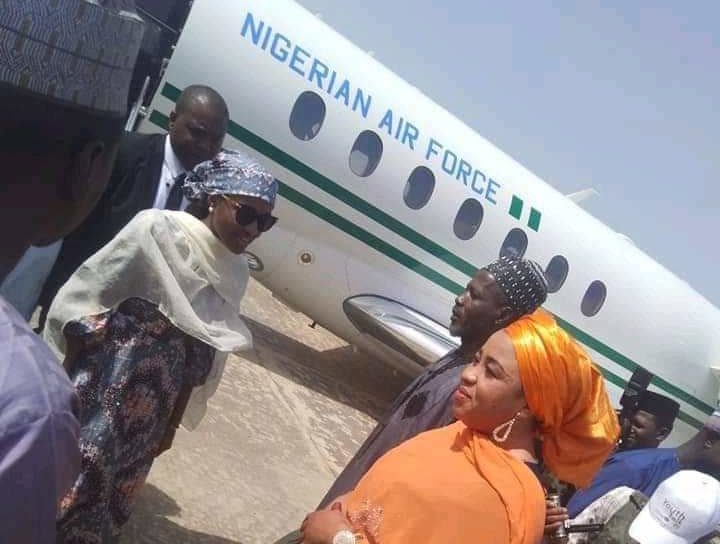 Hanan Buhari reportedly on a visit to Bauchi. Received by the wife of the governor. Flew Presidential jet

Use Of Private Jet By Buhari’s Daughter: What The Law States

The use of a presidential jet by President Muhammadu Buhari’s daughter, Aisha, has continued to generate controversy since Thursday.

PREMIUM TIMES earlier reported how Ms Buhari flew in the jet to Bauchi on a “study tour” of Bauchi Emirate as part of her fieldwork for her ongoing Master’s programme in Photography at a UK university.

Many Nigerians including the President of the Nigeria Labour Congress (NLC), Ayuba Wabba, have criticised the president for “flouting his own touted policy on cutting cost of governance,” by allowing his daughter to fly the jet.

The presidency through a spokesperson, Garba Shehu, has defended the action, saying Aisha, like any other member of the president’s immediate family, is entitled to the use of the presidential jet.

The major opposition party, the People’s Democratic Party (PDP), disagreed saying the presidency was arrogant in its defense of the “indefensible annexation of our national assets and resources for illegal private use.”

What the law says:

Checks by PREMIUM TIMES including confirmations by lawyers indicate that the Nigerian constitution makes no clear rule on such use of the presidential jet.

“For the daughter of the president to use presidential jet on a private tour is an abuse. But as I have said, I’m not aware of any law regulating it,” rights lawyer Jiti Ogunye said.

He, however, noted that as an appurtenance of the Office of the President, there are provisions of Nigeria’s criminal law that criminalizes the use of the seal of the president or governor for anyone other than those elected into the offices.

“However, there should be protocols for such purpose. For example, will it be permissible for children of the president to be moving around with the presidential limousines or cars? That will not be permissible due to security implications and for the dignity of that office.

For senior lawyer Femi Falana, the so-called “normal practice” mentioned by Mr Adesina of using the aircraft in the presidential fleet for members of the first family to attend to private engagements is not backed by any extant law or official policy.

“Even the use of the aircraft in the presidential fleet by the Senate President, House Speaker and Chief Justice of Nigeria has not been approved by the Revenue Mobilisation and Fiscal Commission which is the statutory body empowered by the Constitution and the Revenue Mobilisation and Fiscal Commission Act to determine the remuneration and allowances of all political office holders in Nigeria,” Mr Falana argued.

The senior advocate explained that “a country that is said to be the headquarters of the greatest number of poverty-stricken people in the world cannot afford to waste billions of Naira on the use of presidential aircraft and hiring of commercial jets by state governors that are owing workers several months of unpaid salaries.”

He argued that no official policy authorises “the children of the president to use the presidential jets to attend to private social functions.”

“In fact, there is no precedent whatsoever for such privatisation of the presidency of Nigeria. Having publicly declared that his administration would maintain “a compact and reliable aircraft for the safe airlift of the President, the Vice President and other government officials that go on special missions” President Buhari is estopped from allowing members of the first family to use the jets for their private affairs,” he said.

Another Senior Advocate of Nigeria, Mike Ozekhome, argued that by virtue of the name given to the jet, it is strictly for official duties and not frivolities.

“Now tell me, what official function is the president’s daughter using the jet for. I don’t know if the girl captured with the jet is now an official working with government without the notice of Nigerians. She’s not a staff and this is simply an abuse of office to be cruising with the country’s official jet,” he said.

For Chidi Odinkalu, a lawyer and former Chairman of Nigeria’s National Human Rights Commission (NHRC), the Buhari administration has been acting outside the lines of integrity.

“For an administration that sold itself on a ticket of integrity, these guys are acting entitled to the point of criminality,” Mr Odinkalu said, adding that the government should apologise to Nigerians for the action.

Another Nigerian student denied university admission after scoring 300 in UTME

Another Nigerian student denied university admission after scoring 300 in UTME