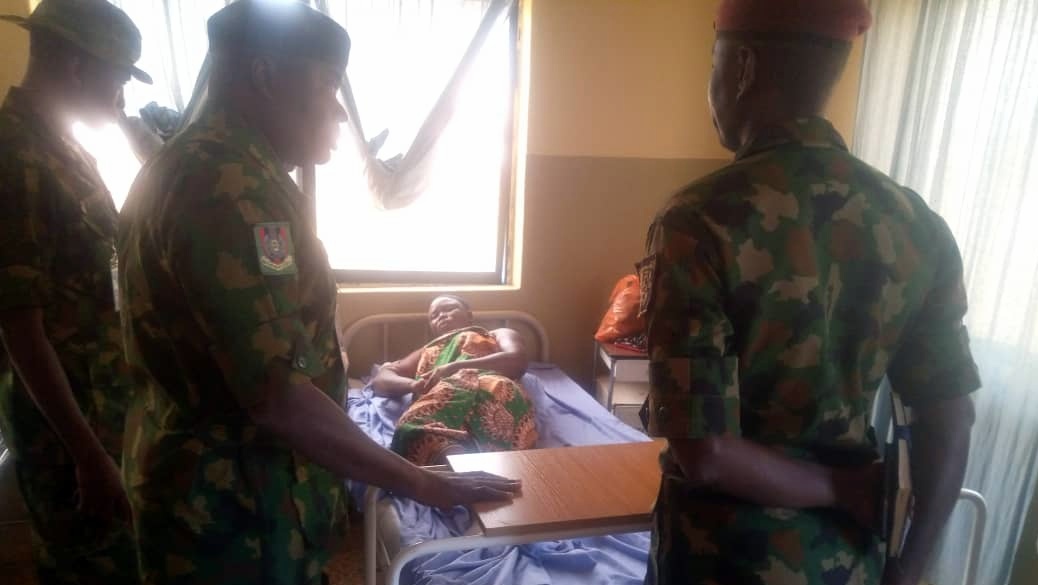 A picture of army officers visiting the wounded at the hospital in the aftermath of the January 2 attack.

A Nigerian army officer on an official break for medical treatment has carried out a stabbing rampage that left at least two people killed and several others injured.

Olodi Blessed, a private from the 401 Engineer Construction Regiment in Osun State, killed a neighbour and a fellow soldier when he suddenly unleashed violence at the barracks on January 2.

His wife and four others, including a lance corporal, were wounded in the attack and now undergoing treatment in critical conditions at the hospital, according to military sources briefed on the development.

A woman, who was preliminarily identified as Mrs Iyabo, and a corporal were the two people confirmed dead in the attack. Their remains are at the morgue of the Obafemi Awolowo University Teaching Hospital.

The wounded lance corporal was amongst those who tried to disarm Mr Blessed, sources said.

Mr Blessed used a jack knife to carry out the attack at about 9:00 p.m., PREMIUM TIMES learnt.

He was later detained after he was arrested by a team of colleagues led by a lieutenant.

Military sources told PREMIUM TIMES the troubled soldier was on a medical leave from the 17 Field Engineer Regiment operating from the counter-terrorism frontlines in Nigeria’s North-east.

He had recently attended a course at the Nigerian Army School of Military Engineers, Makurdi, before returning to the 401 Regiment in Oke-Gada, Ede.

A report on the tragedy had been filed to appropriate military departments and formations, according to sources.

A spokesperson for the Nigerian Army 2 Division in Ibadan, which oversees Mr Blessed’s unit, did not answer calls seeking comment between Sunday night and Monday morning.

Although there was no immediate medical conclusion on what triggered Mr Blessed’s action or his motive, the level of violence he spontaneously unleashed has reignited fears of mental anxieties amongst service members and their family.

Thousands of Nigerian soldiers have been deployed to the Nigeria’s North-east since an insurgency broke out there in 2009.

There have been concerns that some of the soldiers could suffer severe damages to their mental health due to existing deployment policy.

Some officers sent to the frontlines could remain there for three to four years without being relieved.

The military has consistently denied that its deployment policy could be detrimental to the mental wellbeing of troops.

Dozens of Nigerian service members have taken their lives, and often alongside those of others, since Boko Haram war reached its highs in 2013.

The military has also seen an upsurge of soldiers embarking on a shooting or stabbing rampages in recent years. Many of the attacks were carried out by either soldiers still on the frontlines or those who recently secured a break.

In November 2017, a soldier opened fire on his colleagues in Chibok, Borno State, killing a captain.

In June 2018, another soldier receiving treatment for mental illness at the military hospital in Maiduguri, flipped a rifle towards own stomach and fatally pulled the trigger.

He had been on a protracted deployment for active combat before being sent to the facility after showing signs of mental health crisis, PREMIUM TIMES learnt at the time.