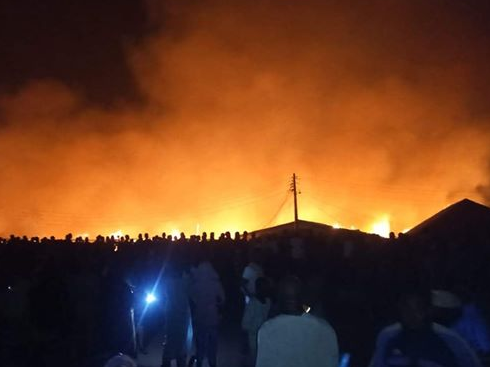 No police personnel was involved in the deadly shootings following the fire incident that razed Akesan Market of Oyo Town on Sunday morning, a spokesperson for the police said.

The police blamed a ‘sister security agency’ for the shootings instead

The police also said only one person was killed contrary to the claim by witnesses that three people were killed.

The fire, which started in the early hours of Sunday, destroyed most of Akesan Market, leaving only a few shops and a filling station, witnesses, including two traders who suffered losses, said

Videos shared on social media by residents show extreme destruction of the ancient market, a walk from the lalace of the Alaafin.

Many indigenes in Oyo, a town of four local government areas and five higher learning institutions, have connections with Akesan Market directly or through family members trading there.

There was no early response as the firefighters stationed just opposite the market failed to stop the fire due to non-functioning equipment. However, at about 6 a.m., a response came from Ogbomoso, 50 kilometres away, with firefighters based in that neighbouring town mobilised to stop the Akesan-Oyo fire.

But residents said the fire had already caused massive damage before the efforts of the external firefighters. Many then went wild, sacking the local fire service station near Akesan by starting a fire just outside the gate.

Hoodlums tried to exploit the situation and loot goods, and the police spokesperson for Oyo State, Olugbenga Fadeyi, said the police mobilised to prevent crimes. Residents corroborated this.

Mr Fadeyi said the police did not kill anybody; rather, a ‘sister agency’ – Operation Burst – fired shots resulting in the death of one person and which injured two more. The police are not part of the Operation Burst, which is an Ajimobi-era special security measure, comprising army and civil defence, and usually accused of extra-judicial approaches.

“There was no single shot fired by the police personnel deployed proactively and professionally to provide security at the scene of the fire incident at Akesan market in Oyo town,” he said. “Instead, the police personnel under the able supervision of DPO Durbar and Area Commander, Oyo Area Command prevented hoodlums and mob from attacking the Oyo State Government Fire Station in the town as well as the Durbar Police Station, Oyo from being set ablaze.”

He added that “More importantly, adequate security measures were provided at the market to deter hoodlums massed at the scene of the fire incident in the early hours of the day (at about 2:30 AM) from capitalizing on the situation to loot shops and properties at the scene.

“But, at about 0700 hrs, a report was received at the Durbar Police Station by the DPO that a sister security agency has arrived at the scene of the incident to assist in the provision of security. Unfortunately, gunshots rang out from their direction skywards.

Fire started from a shop

In a video shared with PREMIUM TIMES, the head of the fire service, Moshood Adewuyi, told journalists and residents Sunday afternoon at Akesan that the fire started from a shop.

He explained to the gathering, which included Kehinde Ayoola, Oyo’s commissioner for the environment, that the service’s response vehicle had developed a fault on Saturday after an operation. Another one, Mr Adewuyi said, has a “major” problem and was not an option to fight the fire in the first place.

“When it (response vehicle) came back (from a fire incident at Akunlemu), the driver discovered the gearbox was about falling down and we immediately invited a mechanic that was handling it,” Mr Adewuyi said.

He added that the technician could not complete the task Saturday night and was going to get a vehicle part on Sunday morning.

“But the fire reportedly started 2 a.m. after the public electricity was restored,” he said. “It affected only a shop. My people were there physically and only requested people to help them get water with buckets but the people did not respond.”

“We demand the operatives involved in this heinous act be brought to justice,” the group said.

It then made further demands: “People should be compensated for their losses. This is even more in order because the late response of the public firefighters caused the extreme impacts of the fire.

“Temporary relief measures should be put in place, including the opening of Atiba Town Hall or any other place deemed suitable for traders to use temporarily. In the context of a setting without social security and insurance, the government has to help people towards livelihood recovery urgently.

“Akesan Market should be rebuilt. This is even long overdue. The rebuilding has to be undertaken as a matter of emergency. We expect a significant output is delivered in six months.

“A thorough investigation into the cause and impacts of the fire should be undertaken. We expect this involves non-governmental or independent participation, comprising professionals with demonstrable integrity and a mind for the society.”

The Governor of Oyo State, Seyi Makinde, reacted to the statement in a Facebook post on Sunday afternoon expressing shock and appealing for calm.

“I sympathise with the victims,” said Mr Makinde. I appeal for calm as we investigate the circumstances around the unfortunate incident.”

Similarly, Speaker of the House of Representatives, Femi Gbajabiamila, also said, “I commiserate with the victims of the fire for the disruption of their economic activities as a result of the unfortunate incident.”