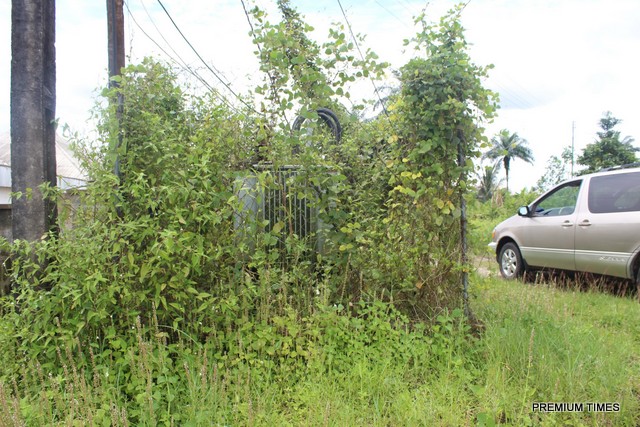 It was a cloudy morning in mid-October when this reporter entered a beer parlour at Inyang Itor community in Ibeno Local Government Area of Akwa Ibom State, South-south Nigeria. He asked for bottled water from the manager of the facility, Sunday Effiong, who was polishing the seats and tables.

Mr Effiong brought out a warm bottled water, which the reporter refused, requesting for a cold one.

“I don’t have cold bottled water. We have not had power supply for some days now,” he said.

The transformer that supplies power to the community has been down for years.

Beside his shop is the 500 Kva/33Kv transformer fenced with iron nets and covered by weeds.

“The transformer has been there for two years and it has not been working. The pole has fallen and the wires have been removed,” Mr Effiong told PREMIUM TIMES.

The signage beside the transformer revealed that it was the Niger Delta Development Commission (NDDC) that awarded a contract in April 2012 to install it for the rural community.

Joseph Ukot, a community leader, said the contractor did not complete the project because it was being owed by the NDDC.

“About two months ago, the contractor came, complaining that he was being owed N20 million. That is why he abandoned the electrification project,” he said.

PREMIUM TIMES could not verify how much the project cost exactly. The NDDC spokesperson refused to provide any information on the project.

“At first, we had a loss of armoured cable and it was replaced thinking it was the problem but the transformer never worked. We have light like once a month or twice a month. It is another transformer that we are using. If it is working, it will serve a lot. This one is not helping,” said Mr Ukot.

NDDC is a federal government agency established in 2000 to channel development in nine oil-rich Niger Delta states. However, the commission has failed in its responsibility as many abandoned electricity projects of the agency litter the state.

According to a report by the Nigeria Extractive Industries Transparency Initiative (NEITI) on revenues, deductions, disbursement, and application of funds by NDDC, the agency had allocated several billions of naira for electrification projects in Akwa Ibom State.

READ ALSO: NDDC was so corrupt, it was treated like ATM – Akpabio

The total cost of electrification projects awarded by NDDC in the state between 2007 and 2011 is N2.06 billion, while N456.45 million was certified.

Between 2012 and 2016, according to the Fiscal Allocation and Statutory Disbursement (FASD) released by NEITI, at least N7 billion was spent on Infrastructure (Electrification) in the nine Niger Delta states by NDDC.

However, many communities in the state have not benefited from the electricity projects awarded by the NDDC. They frowned at the high number of abandoned projects in the state.

The NDDC has also received about N1.534 trillion since its inception in 2001.

This money was allocated to the NDDC for expenditure on developmental projects with the intention of ensuring development and reversal of huge infrastructural deficit in the nine Niger Delta states as a result of decades of government neglect and environmental degradation by oil exploration companies.

Unfortunately, despite huge funding, many of the projects NDDC has executed in the past remain poorly executed or sometimes abandoned leaving millions of residents of the region to suffer.

As a result of the many reports of corruption in the commission since it started operations, President Muhammadu Buhari in October ordered a forensic audit of the commission.

Mr Buhari said the agency has little to show for the billions of naira it received in the last 19 years.

The current minister of Niger Delta, Godswill Akpabio, also lamented the extent of corruption in the NDDC, saying the agency was treated like an ‘ATM’ by its past administrators who just stole blind from it.

The case of Ikot Ekan in Etinan Local Government Area is different. In this case, the transformer was installed and working before residents decided to do away with it.

The villagers said the transformer installed by Harrsun Invest Limited was removed for safekeeping by the village council a few months after it was installed.

According to Ime Equere, the village assistant youth secretary, “The NDDC provided us with the transformer. When they brought it, they installed it well and it was working but the Port Harcourt Electricity Distribution Company (PHED) gave us a high bill of N200,000 monthly to pay but villagers were struggling to pay the bills.”

The village has another transformer but they needed another one to compliment it. Due to the inability to pay the high bills for the two sub-stations, PHED suggested to the village council to shut down the NDDC transformer, to which the council agreed.

Mr Equere said thieves went with a crane at night to steal the transformer but they did not succeed. “So we went to PHED to report the case and they gave us the approval to bring the transformer to the village head’s house,” he said.

When this reporter visited the house of the village head, he saw that the transformer was being well kept. “Will the transformer remain there?” the reporter asked Mr Equere. “We plan to use it to replace the old transformer when it spoils,” he replied.

A resident, Uwakekeare Ukpong, however, decried the situation, saying the absence of the transformer was partly responsible for the irregular power supply in the community. He said PHED only gives the community power twice in a month. “I feel bad that we don’t have light and people do not want to pay for bills because they do not see light,” he said.

Another transformer installed at Afaha Oku in Uyo local government is not working optimally.

“This transformer used to have problems sometimes,” said a female resident who asked not to be named. “If they give light, it will spark. They repair it always. Yesterday they gave light, but the transformer did not work. Now we don’t know if it is working because we have not had light for some days now. ”

NDDC awarded the contract for the installation in 2015.

In 2012, the NDDC awarded a contract to install a solar-powered street light at the University of Uyo’s permanent site. When the reporter visited the institution, the project had not been completed.

The street light was installed from the main gate to the end of the first roundabout while other areas of the school have no street lights. The lack of light in such an environment can expose students to violent attacks.

Chinyem Godwin, the head of intelligence at the permanent site of the university, said, “Currently, about six of the installed street lights are not working.”

A separate contract for the provision and installation of solar-powered street light complete with 600 X 600 mm reinforced concrete plinth was awarded in March 2013. It was to be installed at Unit J of Ewet Housing Estate in Uyo local government.

A similar street light project was also awarded and to be provided and installed in the C-line area of Ewet Housing Estate and environs. The street lights were working but did not reach all locations of the line. Some areas have street lights while others do not.