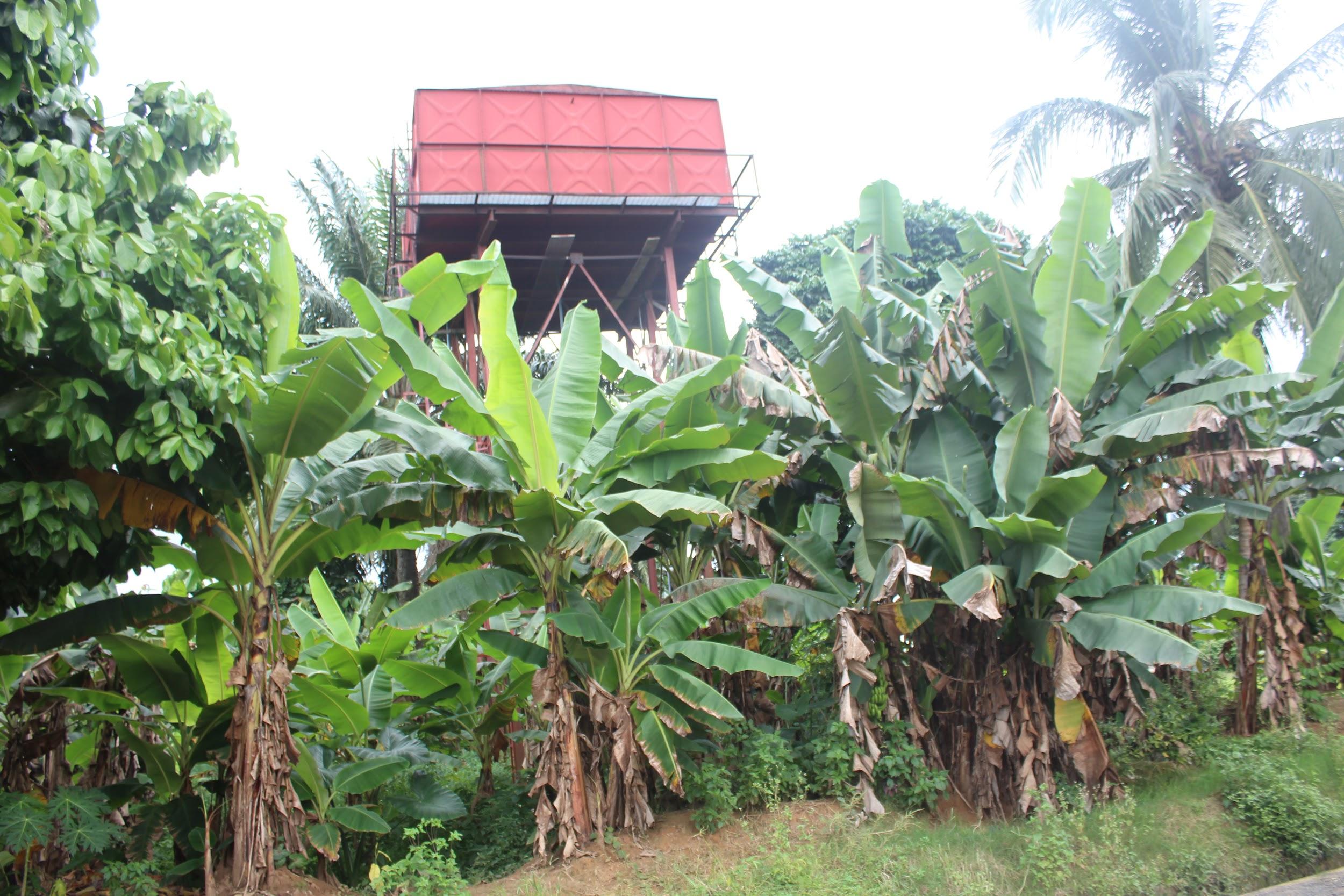 When construction workers and equipment arrived Ifa Ikot Okpon community in Akwa Ibom State in 2011, Etteidung Udo was filled with joy. Mr Udo was then a member of the village council but is now its head.

The Niger Delta Development Commission (NDDC) had awarded the contract to construct a solar-powered water project for the rural community in Uyo Local Government Area of the state.

Initially, NDDC had a problem acquiring land for the water project. Due to the importance of land to the people, nobody was willing to give out their land.

“I had to voluntarily give out portions of my land to NDDC so that the project will not be taken away,” Mr Udo said, “I felt the project would bring happiness to the people, considering the water scarcity in my community.”

Eight years after the contract was awarded, the project has been abandoned, PREMIUM TIMES investigation revealed. The site is now overgrown by weeds.

“I feel so bad that my land has been wasted,” Mr Udo said. “They have dug the borehole and erected the galvanized tank. After that, nothing. The contractor was complaining that the money was not completely paid. They left the site and have not returned.”

PREMIUM TIMES could not confirm the cost of the project as the NDDC refused to respond to several enquiries on the matter. However, Mr Udo said he knows the value of the project because he signed it on behalf of his community.

“I saw the document, which I signed. That project cost N65 million. That is the worth of the contract. I saw the bill of quantity. They should have made 500 meters distribution line so that people can get the water without coming to where the tank is. Perimeter fencing was there. But as you can see, that has not come to stay.”

NDDC is a federal government agency established in the year 2000 to channel development in nine oil-rich Niger Delta states, including Akwa Ibom. The agency’s slogan reads: “Determined to make a difference.”

At least N1.53 trillion has been received by the NDDC since its inception in 2001. This amount was allocated to the NDDC for expenditure on projects to reverse the huge infrastructural deficit in the nine Niger Delta states as a result of decades of government’s neglect and environmental degradation by oil exploration companies.

Records have shown that the commission received total revenue of NGN 593.961 billion from 2007 to 2011. The commission spent NGN459.237 billion on recurrent and capital projects on water, health, education and roads.

A large chunk of the money is, however, believed to have been misappropriated.

Appalled by the NDDC’s scandalous record, President Muhammadu Buhari in October ordered a forensic audit of the commission.

According to a report by the Nigeria Extractive Industries Transparency Initiative (NEITI), N50.4 billion was released for a total of 146 contracts between 2007 – 2011 in Akwa Ibom State.

Of the 146 projects, the NEITI document on revenues, deductions, disbursement, and application of funds by NDDC revealed that only 18 of those projects were completed while the remaining 128 projects are either not completed or ongoing.

This reporter investigated the status and impact of many of the abandoned NDDC water projects in Akwa Ibom.

The water projects the NDDC awarded between 2007 and 2011 amounted to N2.2 billion while N42.87 million was certified and confirmed to have been executed.

Rural communities in the state continue to suffer from lack of water supply.

The people of Ifa Ikot Okpon are angry over the abandonment of the water supply project in their community. Mr Udo said he visited the NDDC office in Uyo several times to complain about how the contractor abandoned the project.

“All my efforts to return the contractors to the site were to no avail, so I had to give up,” he said.

Charles Odili, NDDC’s Assistant Director of Corporate Affairs was aggressive when asked about the abandoned project.

The situation with other NDDC solar-powered water projects in the state is not different from the one in Ifa Ikot Okpon. This reporter also found the one at Afaha Effiat in Etinan local government, area abandoned. The bushy project site was fenced to avoid trespass.

Godwin Udoh, a motorcyclist in the community, said water supply is a major problem in Afaha Effiat.

“We don’t have streams and the water project has been abandoned. We beg the government to help us so that we can feel their impact. It is bad,” he said.

A document provided by the NDDC revealed that the contract for the project was awarded in 2012.

The water project, according to the community, has been abandoned for seven years. “It has never supplied water since it was constructed,” a female resident said as she dropped a bucket filled with clothes to pay attention to the reporter. “We are just suffering here because we have no water. We are not happy,” she said.

Gabriel Okon, 81, sat in his veranda with a hand fan on his right hand, sharing greetings with everyone passerby. In front of his house in Ikot Udo Etor community in Etinan local government area is the water project with reticulation awarded by NDDC to Sunex Nigeria Limited in March 2011.

The fenced project with a red gate is surrounded by weeds. Mr Okon said the project was completed and supplied water until it stopped three years ago.

“People came here and stole the pump and since then, we don’t have water. I feel bad because there is no water here,” he said.

At Ekpene Ukpa village in Etinan local government area, the story is the same. NDDC awarded a contract for the construction of a solar-powered water project in 2010. When PREMIUM TIMES visited the site, it was surrounded by weeds. Someone in the community has turned the site into a cassava farm.

The borehole was dug, tank erected, taps and solar fixed. But Sunday Moses, a youth leader in the community, said the borehole has never supplied water since 2010.

“Almost every part of the solar-powered water project has been stolen. We suddenly found out that all the parts, including pipes, have been removed. Even the pumping machines have been stolen. How the parts missed is a question we cannot answer,” Mr Moses said.

A tour of the community shows it has two public water projects. One was built by a non-governmental organisation (NGO) and the other by the NDDC. Only that of the NGO was working.

“We only go to people’s houses to beg for water to drink. If the project is worked on to supply water, it will bring happiness to us,” Mr Moses said.

Some water projects sited in Ibeno local government area also non-functional. Ibeno is one of the oil-producing local governments, where ExxonMobil operates. Due to the pollution of the environment, it is difficult to get potable water.

In 2002, NDDC awarded a contract for the construction of a massive water project for Iwuochang and Upenekang communities. Water treatment was a component of the project.

When PREMIUM TIMES visited the site in Upenekang, the facility was not functioning. The NDDC also did not specify the cost of the project.

Christopher Akparo, the youth president of Iwuochang, said the projected was completed until some of the pipes were broken during road repairs.

“We don’t have good water here in Iwuochang. That is our major challenge. That is why our people are dying daily because there is no good water to drink. We suffer to get water,” he complained.

A separate NDDC funded water project executed in Iwochang has also been abandoned.

A contract for the construction of a solar-powered water project at Mbiabong in Uyo local government was awarded in 2006. The tank and taps are in place but the project is not providing water to residents

Part of Mbiabong where the project is located is now the popular Shelter Afrique Housing Estate. Bassey James, a resident, told PREMIUM TIMES that the residents of the estate do not bother if the project works or not because every household now has its borehole.

To stop abandonment of projects by the NDDC, Mr Udo suggested that communities should handle the projects. “Even if they send their contractors to come and do it, let the money be given to the community to supervise,” he said.

“We plead to NDDC to re-award the project,” said Mr Akparo. “When the water project is functioning, the children, youth and adults will benefit from it.”