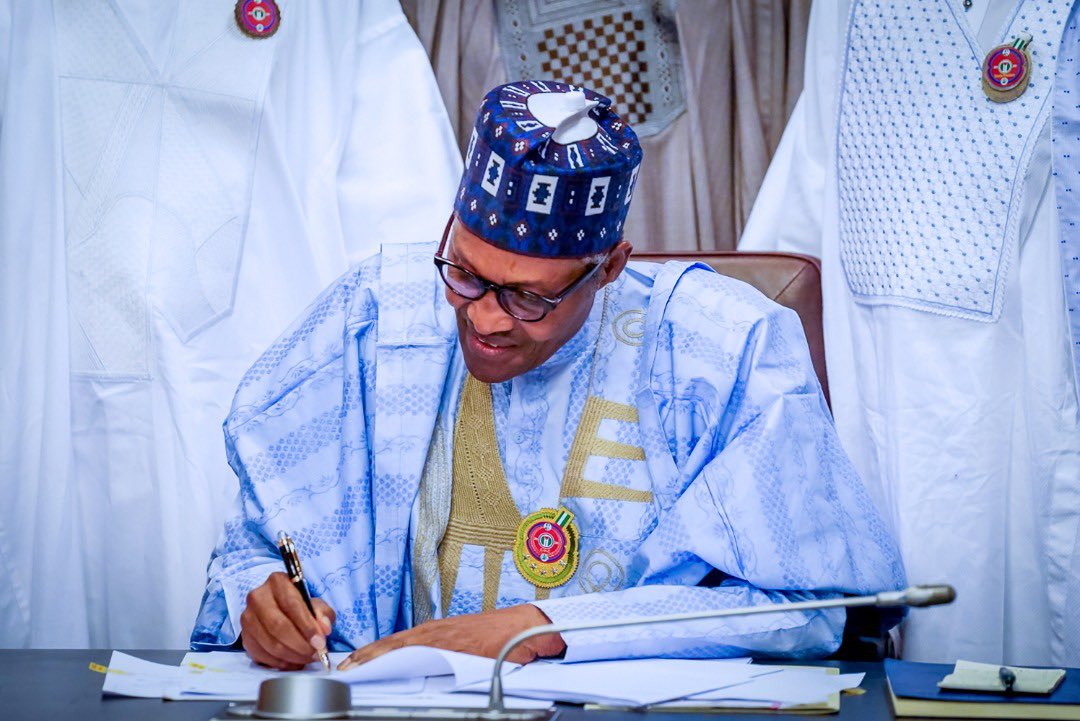 President Muhammadu Buhari has signed the 2020 appropriation bill into law.

The National Assembly had on December 5, 2019, passed the budget estimates presented by Mr Buhari on October 8, 2019.

The National Assembly increased the budget estimates from N10.33 trillion to N10.50 trillion.

The passage was a sequel to the presentation of a report by the chairman of the Senate Committee on Appropriation, Barau Jibrin.

The signing was witnessed by Vice President Yemi Osinbajo, President of the Senate, Ahmed Lawan and Speaker of the House of Representatives, Femi Gbajabiamila.

Others are the Secretary to the Government of the Federation, SGF, Boss Mustapha, Minister of Finance, Zainab Ahmed, Minister in charge of Budget and Planning, Clement Agba and the Director-General of the Budget Office, Ben Akabueze.

When the National Assembly passed the bill last Thursday, new projects inserted into the budget moved it up to ₦10.594 trillion.

A breakdown of the inserted projects obtained by PREMIUM TIMES showed that the country may end up spending more on what anti-corruption agents and activists have identified as “vague, frivolous, self-enrichment projects smuggled into the budget by federal lawmakers.”

The new projects are expected to cost Nigeria about ₦264 billion.

Mr Buhari signed the budget document into law on the occasion of his 77th birthday on Tuesday, and commended the National Assembly for speedy passage of the bill.

“It is my pleasant duty, today, on my 77th birthday, to sign the 2020 Appropriation Bill into law,” a message posted on Mr Buhari’s twitter page said.

“I’m pleased that the National Assembly has expeditiously passed this Bill. Our Federal Budget is now restored to a January-December implementation cycle.”