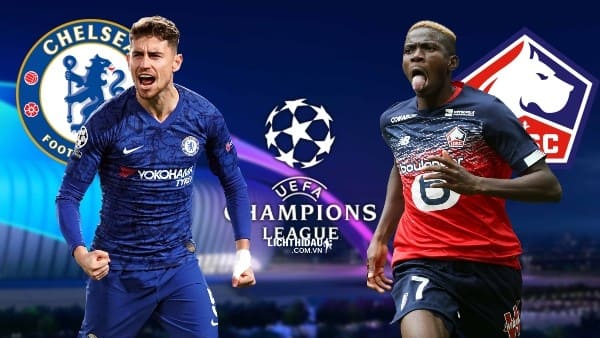 Victor Osimhen’s maiden appearance in the UEFA Champions League will be coming to an end tonight as his French club, Lille, takes on Chelsea at Stamford Bridge.

While Lille stand no chance of progressing to the knockout phase of the Champions League or even dropping to the Europa League, Chelsea are condemned to win tonight if they are to progress to the next phase without hassles.

Frank Lampard’s side sit third in Group H on eight points, level with Valencia in second and trailing Ajax in first, who are on 10 points.

A win tonight will send them through, with Ajax and Valencia facing each other in Amsterdam – at least one of them would be guaranteed to finish below Chelsea should Lampard’s team pick up three points.

Lille, meanwhile, are guaranteed to finish bottom of the table after taking just one point from their opening five matches

As Lille have nothing to play for, the situation could not be more perfect for Chelsea to go out and get the result they need to qualify. It would be a disaster if they crash out of the Champions League.

Willian takes it and another corner kick for the Blues

Nice pass from Tammy Abraham to Pulisic.. His effort is inches off the target

Chance. CHELSEA come close as Emerson tries a shot but saved by the Lille keeper

Willian with the assist

Chelsea are in control here with 70% of the Ball possession.. They also three balls on target while Lille had none

Another good effort by Emerson as he directs a shot on target, but the keeper makes a good save

Close.. PULISIC tries to get a pass through to Tammy Abraham but blocked this time

Goal!! Azipueleta heads in to give Chelsea a 2-0 lead

Yellow card for Celik for a dangerous tackle on Pulisic

Corner kick for Chelsea.. Tammy Abraham tries to head it in but the Lille keeper makes a quick save

Corner kick for Chelsea.. Tammy Abraham tries to head it in but the Lille keeper makes a quick save

Another save by Lille keeper.. This time he collides with Kourt Zouma

Zouma gets a Yellow card

Bright start by the Blues.. Almost getting a third

Willian takes it and Lille keeper with another safe

Lille clear thier lines and throw in for Chelsea

Close.. Chelsea pile the pressure and Tammy almost gets another goal

Play has been stopped because there is a player lying on the pitch. He is the Lille goal keeper

Mike Maignan is down injured and receives medical treatment on the field.

Chelsea have recorded just four clean sheets in 24 games this season.. Will it be five tonight.. Still Chelsea 2-0 Lille

Goal.. Loic Remmy pulls one back for Lille

The former Chelsea man makes it 2-1

Another forced change for Lille.. Luiz Araujo is injured and is replaced by Renato Sanches.

Chance! Callum Hudson-Odoi finds some room for a shot but fails to trouble the keeper. It’s a goal kick

Sudan: Al-Bashir questioned over coup that brought him to power 30 years ago