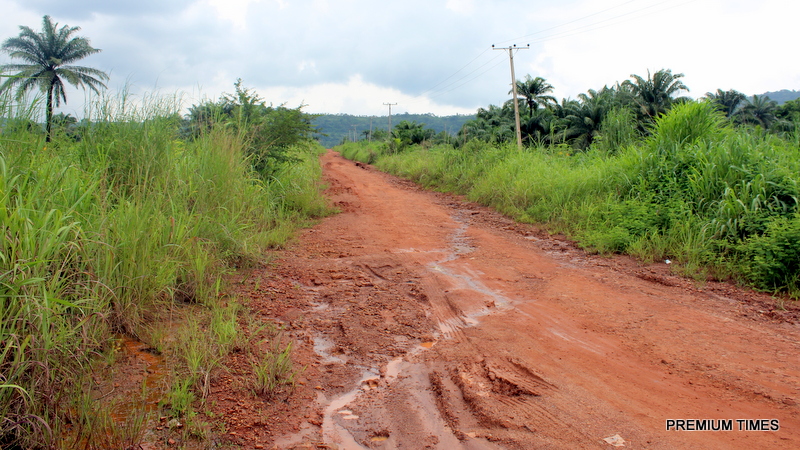 It had just rained that Wednesday morning in July as this reporter and his fixer drove in a Toyota Corolla car to Enugu in southeastern Nigeria to track the constituency projects of federal lawmakers in the state.

At Awgu Local Government Area, we went straight to Ugwueme community to track an erosion control project nominated by the senator representing Enugu West District, Ike Ekweremadu. This project had a budget of N40 million.

At the project site, the signage had been covered by overgrown shrubs. The ground was also slippery. The reporter decided to drive into the community but the slippery ground prevented the car from making headway.

The road was lonely and impassable — no human being, no motorcycle, and no car. The erosion control project under the supervision of the Anambra Imo River Basin Development Authority (AIRBDA) had been abandoned since it was awarded in 2017. There was no drainage system constructed to control the flood and as a result of the heavy rains, people no longer use the road.

In 2012, an unusual flood-displaced 1.3 million Nigerians and 431 people died in what the National Emergency Management Agency (NEMA) referred to as the worst flooding in over 40 years, with 30 of the country’s 36 states affected, causing damage estimated by the government at N2.6 trillion. Flooding has become a major hazard to Nigerians mostly due to climate change and it has become regular, threatening lives and property.

Nigeria, especially the southeast, has long suffered erosion mostly as a result of heavy rainfall and poor road and drainange construction, leading to flooding. Many roads have been destroyed and lives lost as a result of gully erosion. The menace continues to occur without significant efforts to curtail it.

According to the World Bank, “Southeastern Nigeria is a hotspot for massive gully erosion, an advanced form of land degradation. Rapidly expanding gully complexes have resulted in extensive impacts, including loss of human lives and properties.”

In Enugu West senatorial district, many communities suffer from erosion due to poor drainage systems, hence the need to embark on erosion control projects that will control the menace. Mr Ekwremadu, who between 2007 and 2019, served as the Deputy Senate President, nominated over 30 erosion control projects across communities in his constituency. Information provided by the Ministry of Finance through an FOI request letter sent by accountability platform, UDEME, revealed that lawmakers in Enugu State nominated projects worth over N1 billion in 2017.

Information from the Ministry of Finance showed that at least 50 per cent of the budgets had been released to MDAs, including AIRBDA for project execution, in addition to mobilisation fee for contractors. However, the AIRBDA refused to disclose the exact amount released for each of the projects in this report. It’s spokesperson, Chidi Amaliri, did not return calls and messages sent to him.

UDEME tracked the erosion control project in Mmaku-Mgbidi-Nkwe-Ezere communities in Aninri Local Government Area, which was nominated at a budgetary sum of N60 million. When this reporter arrived at the community and the stated location, it was discovered that no work had been done.

Sunday Oche, a native of Mmaku, said the project has been left uncompleted. “They say it is the raining season that delayed the completion of the road. They stopped along the road. They just did a bit and stopped it there two years ago,” he said.

The same situation was met at Okpueze Umumba Ndiuno in Aninri Local Government Area, where N60 million was budgeted for the construction of a drainage system. It was discovered that although a part of the work was done, it has been washed off by erosion and has since been abandoned.

In 2016, Mr Ekweremadu nominated the completion of Ugwuakano/Onovo/Iyapo/Amabiriba and Okpanku erosion control project for N45 million in Aninri Local Government Area. A similar project was nominated at Obeagu-Ezza-Ndeaboh and awarded at the same amount. When UDEME visited both project sites, only tarred roads were seen.

The Aguenyi-Mpu erosion control project has been abandoned since it was awarded for N30 million in 2016. The road has been taken over by weeds. The project was started and abandoned. The road is impassable. No vehicle or motorcycle can use the road because it is now flooded due to a lack of drainage system.

“Nobody uses that road again because it’s so bad,” said a resident who asked not to be named. As shown in the signages, the contract for the project was first awarded to Primagate Technical Works Limited and then re-awarded to Bluewater Integrated Contractors and Logistics Limited.

Workers were on the site when UDEME visited Ovum to track the Ovum-Obiagu-Mpu erosion control project in Aninri Local Government Area. There were young men and women constructing gutters on the 1.5 km road.

The site engineer, Ndubuisi Ajah, said, “We started the project in May this year. It has been going so smoothly, the road is about 1.5 km and the drainage we want to put is about 700m. So far, we’ve covered up to 350m.”

He said the erosion control project will benefit the three communities.

“We don’t have access road from this town to the other parts of the town and the road has been so narrow and bad. It’s not motorable. You can see with this drainage, we can easily move from this place to the other town and from here, we can access Ndeaboh.”

The Special Adviser to Mr Ekweremadu on Projects, Jonathan Ivoke, said some projects are not completed due to the lack of funds. He said a project can take four years to complete because the budget for it is not released once.

He said the first budget for every project may be to clear the site, excavate it and lay stones before the main project will begin. “These funds are not fully paid. We have to spill over to the next year. What we do for our constituency projects is that we start with one, two or three budgets [allocating the projects for three years] before we can complete one project.”

He, however, did not disclose the exact amount released for the project so far, saying such inquiries should be sent to the AIRBDA.

Ivo river water supply and dam project for Okpanku and Mpu communities in Aninri Local Government Area is abandoned. When the reporter visited the project site, the gate was locked. The environment was surrounded by shrubs and no trace of a human in and outside the fenced building.

No security was overseeing the building. There was no way the reporter could access the building. However, by looking through a hole, the reporter sighted a generator and an empty water tank, whereas the roofings were already falling off.

Mr Ivoke said the project had some construction and design problems so the government needed to rectify it. The project covers a dam, irrigation, and water supply.

“There was a design error and collapse of the spillway. Minister of Water Resources, Sulaiman Adamu, ordered for a review of the design when he came in 2018. After the review, they were supposed to re-award the projects. We have written to them but they have not responded,” he said.

The construction of 1km Amangwu/Odangene road with two-side drainage systems was awarded in 2017. The project which was attracted by the former senator representing Enugu East District, Gilbert Nnaji, has been abandoned. The road, which was awarded for N18 million was poorly executed. The drainage systems were not completed and erosion has taken over parts of the road.

When this reporter spoke to an old woman selling condiments, she said people find it hard to use the road whenever it rains. Parts of the road have been turned to dumps.

At Agbani-Amuri road in Enugu East senatorial district nominated by Mr Nnaji in 2017 as a constituency project, this reporter identified a signage stating that the road had been constructed by the Enugu State Government.

The project was budgeted at N50 million for rehabilitation work. However, residents of that community said the senator started the project but later abandoned it before the state government decided to complete it.

UDEME also tracked Ugwueme-Nenweta-Nkwe-Nzere-Awgunta-Mgbidi-Mmaku road project. The constituency road project sponsored in 2016 by Mr Ekweremadu to be implemented by AIRBDA for N14 billion. It was observed that the work had not been completed and no site workers were seen. According to Mr Oche, work on the project was stopped temporarily when the rain began. He said the contractors would return to work after the rain.

Uche Anichukwu, the media aide to Mr Ekweremadu, said the project was never abandoned. He said it will be completed when the rain stopped.

“There is a misconception that lawmakers are given money directly to execute constituency projects. “They only nominate projects. The issue of procurement and execution is normally handled by the ministries, departments and agencies”.

Nnadi Ejiofor, an environmental management and control expert at the Centre For Environmental Management and Control, University of Nigeria, said erosion in Enugu State has been a continuous problem accelerated by climatic and human activities and therefore should be addressed.

He linked erosion in the southeast to waste dumps along the river channels, which may obstruct the flow of water and lead to flooding, especially in times of heavy downpour. He also blamed lack of awareness of socio-economic and environmental effects of anthropogenic activities on these floodplain and river courses, which contribute to the abuse in these regions.

“The lawmakers are getting it wrong,” said Mr Ejiofor, when asked about the erosion control and projects being awarded.

“There are situations where some of the lawmakers give out these projects (erosion control and road) to their loyalists and/or relations as a form of settlement and forget that they are not experts. Then what do you expect if not recurring erosion issues? Again we are also made to understand that some of the proposed projects are not approved and linger for a long time unimplemented,” he said.

Worried about the abandonment of projects nominated by lawmakers and the corruption embedded in it, the anti-graft agency, ICPC, last week held a summit to discuss the matter.

At the summit, President Muhammadu Buhari lamented that there was little to show for over one trillion Naira budgeted for constituency projects of the National Assembly members in the last 10 years.

At the end of the summit, participants called on the government to prosecute contractors found culpable and to ensure no new constituency projects are nominated in areas where previous ones have not been completed or have been abandoned. Should the recommendations be adopted by the federal government and the lawmakers, then Enugu would surely be among the states to be affected.