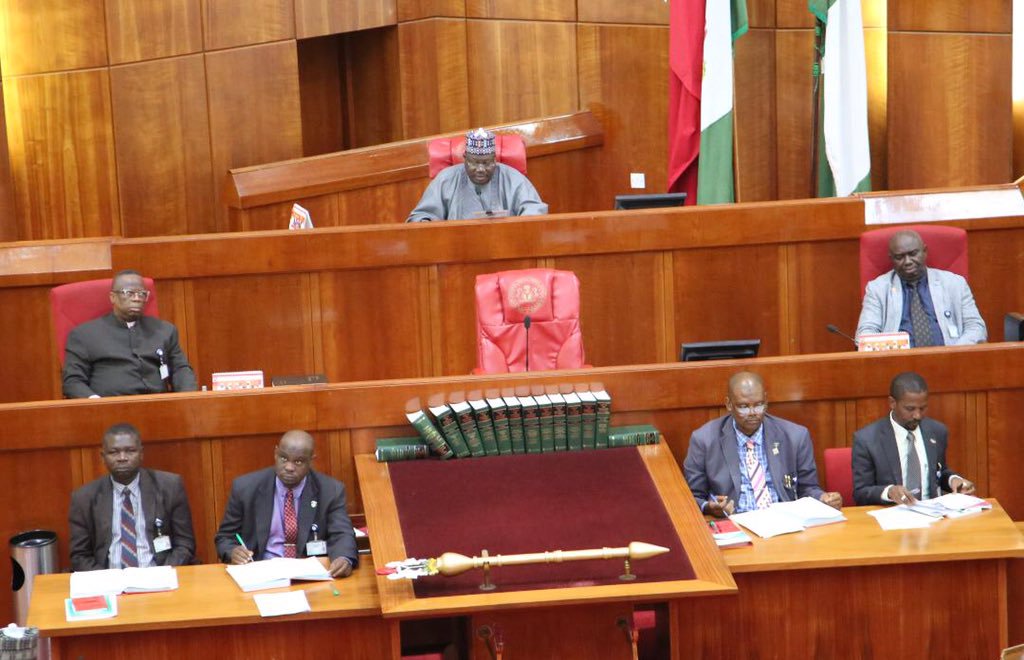 The Senate on Tuesday reintroduced a bill that seeks to penalise persons found guilty of hate speech.

The National Commission for the Prohibition of Hate Speech Bill was sponsored by the deputy chief whip, Aliyu Abdullahi.

It prescribes death penalty for anyone found guilty of spreading a falsehood that leads to the death of another person.

The bill also seeks the establishment of a National Commission for the Prohibition of Hate Specch to help investigate and prosecute offenders.

A similar bill was introduced to the Senate on March 2018 for consideration and passage. It however, did not make it through to third reading.

The reintroduction of the bill has generated controversies among Nigerians.

Some civic groups have kicked against the bill because of its narrow and unclear definition of what constitutes hate speech.

They say the provisions of the bill would be contrary to the Nigerian Constitution if the bill becomes law as designed.

The Constitution protects the rights to unhindered speech, expression and association.

He said the freedom of speech and other key elements of civil liberties which Nigerians enjoyed between 1999 and 2015 should not be taken away by the current administration.

The lawmakers are expected to debate the details of the bill on another legislative day.

The bill is titled “National Commission for the Prohibition of Hate Speech Bill.”

– The bill proposes that any person who uses, publishes, presents, produces, plays, provides, distributes and/or directs the performance of any material, written and or visual which is threatening, abusive or insulting or involves the use of threatening, abusive or insulting words or behaviour commits an offence if such person intends thereby to stir up ethnic hatred, or having regard to all the circumstances, ethnic hatred is likely to be stirred up against any person or person from such an ethnic group in Nigeria.

– According to the bill, any person who commits this offence shall be liable to life imprisonment and where the act causes any loss of life, the person shall be punished with death by hanging.

**Ethnic hatred means hatred against a group of persons from any ethical group indigenous today Nigeria.

– On Ethnic Discrimination, the bill penalises a person who discriminates against another person if, on ethnic grounds, the person without any lawful justification treats another Nigerian citizen less favourably than he treats or would treat other person from his ethnic or another ethnic group and/or that on grounds of ethnicity.

*Harassment on the basis of ethnicity
– The bill says a person is guilty of ethnic harassment if he justifiably engages in a conduct which has the purpose or effect of violating that other person’s dignity or creating an intimidating, hostile, degrading, humiliating, or offensive environment for the person subjected to the harassment.

– A person who subjects another to harassment on the basis of ethnicity commits an offence and shall be liable on conviction to an imprisonment for a term not less than ten years, or to a fine of not less than N10 million, or to both.

*Ethnic or racial contempt
– The bill stipulates that any person who knowingly utters words to incite feelings of contempt, hatred, hostility, violence or discrimination against any person, group or community on the basis of ethnicity or race, commits an offence.

According to the bill, a corporate body known as the Independent National Commission for the Prohibition of Hate Speech will be established. The commission will be capable of suing and be sued.

The commission will also be capable of:

– Purchasing or otherwise acquiring, holding, charging or disposing of movable and immovable property,

– Borrowing or lending money; and

– Doing or performing all other things or acts for the furtherance of the provision of the bill.

Some functions of the bill include:

– To promote a harmonious peaceful co-existence within the people of all ethnic groups indigenous to Nigeria by ensuring the elimination of all forms of hate speeches in Nigeria, and to advise the Government of the Federal Republic of Nigeria on all aspects thereof.

– Without prejudice, promote the elimination of all forms of hate speeches against any person(s) or ethnic group indigenous to Nigeria.

– Discourage persons, institutions, political parties and associations from advocating or promoting discrimination or discriminatory practices through the use of hate speeches.

– Promote tolerance, understanding and acceptance of diversity in all aspects of national life and encourage full participation by all ethnic communities in social, economic, cultural and political life of other communities;

– Promote respect for religions, cultural, linguistic and other forms of diversity in a plural society;

– Investigate complaints of ethnic or racial discrimination and make recommendation to the Attorney-General, the Human Rights Commission or any other relevant authority on the remedial measures to be taken where complaints are valid;

– Make recommendations to the Government on any issue relating to ethnic affairs including whether ethnic relations are improving;

The bill recommends that the commission shall have power to summon witnesses and call for the production of books, plans and other documents and to examine witnesses and parties on oath.

The bill allows for aggrieved persons to complain to the commission by lodging a written complaint to it by hand, facsimile or other electronic transmission or post, setting out the alleged contravention.

The bill however, allows the commission to decline to entertain some complaints where:

– The commission considers that a complaint(s) is ferrous, vexatious, misconceived or lacking in substance;

– the complaint involves subject matter that would be more appropriately dealt with by a court;

– it involves subject matter that has been adequately dealt with by a court; or

The bill further states that if the commission becomes aware of circumstance(s) where a contravention of the provision(s) of the Act may have occurred (other than an alleged contravention that is the subject of proceedings before the Commission), the commission may initiate investigation.

The commission is also allowed to extend its investigation on a matter when necessary.

If the commission, after investigation, is satisfied that a person has contravened a provision of the Act, the commission shall make all reasonable endeavor to conciliate that matter, it says.

*The Federal High Court shall have and exercise exclusive jurisdiction to try all offences under the Act.