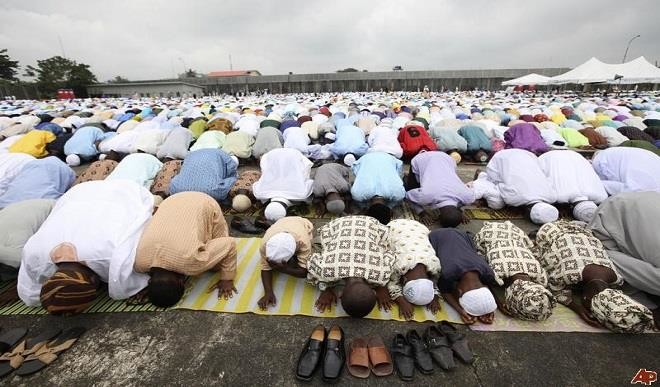 President Muhammadu Buhari, in his goodwill message to Muslims, on the commemoration of the Maulud (birthday) celebration of Prophet Muhammad, has charged Nigerian Muslims to borrow a leaf from the life of the great Prophet.

The president who spoke through his senior special assistant on media and publicity, Garba Shehu, said embracing the great virtues for which the prophet was known would change the attitude of Nigerians towards the nation, and boost peaceful coexistence among other faith adherents.

In an apparent reference to the extremist Boko Haram, the president called for moderation in the practice of Islamic teachings.

“The indiscriminate killing of innocent people, the kidnapping of female students and forcing them into marriage and conversion is contrary to teachings and personal examples of the Prophet Muhammad,” the presidential statement read.

He advised parents to safeguard their wards from being lured by extremist groups.

“Violent extremism is the single biggest challenge facing the image of Islam today which has been hijacked by a minority of misguided elements who are using religion to cover-up their criminal agenda.

“There is the urgent need for increased vigilance by Muslims in order to frustrate and stop the spread of violent ideologies that are causing human havocs and tragedies around the world.

“Extremism is like a cancer that needs to be attacked in its early stages before it grows malignantly out of control and harm the society.”

In his message, a former vice president, Atiku Abubakar, tasked religious leaders to be at the forefront of fighting religious bigotry, which sprouts the seeds of hate and violence in the country.

He stressed the need to tolerate one another in order to build a stable and peaceful country.

“Given our ethnic, cultural and religious diversity in the country, our religious leaders should at all times be alert to any threat to peace on account of incendiary utterances in the name of preaching.

“Prophet Muhammad was a paragon of peace, humility and justice for all, and as we honour him on this great occasion, let us follow his examples in words and actions.”

On his part, Kano State governor, Abdullahi Ganduje, urged Muslims to seize the moment to “pray fervently for peace, security and rapid socio-economic development of the state and the country in general.”

“Practicing the Prophet’s qualities of compassion, fairness, justice, honesty, self-discipline, tolerance, hard work, perseverance and devotion in all our dealings is the only solution for overcoming our personal and collective problems,” he said.

In like message, Ifeanyi Ugwuanyi, the governor of Enugu State, said collective faith in God and sustained prayers for peace, unity and progress of the country, remain the ultimate goal for the full realization of the nation’s founding fathers’ dreams and aspirations.

Born 570CE, Prophet Muhammad is Islam’s last prophet through whom the Qur’an was revealed. Robiu-l-Awal 12 (the third month in the lunar calendar) is believed to be his birth date. While some Muslims around the world celebrate the date, some do not as it is believed to be an innovation which was not a tradition during the time of the prophet.