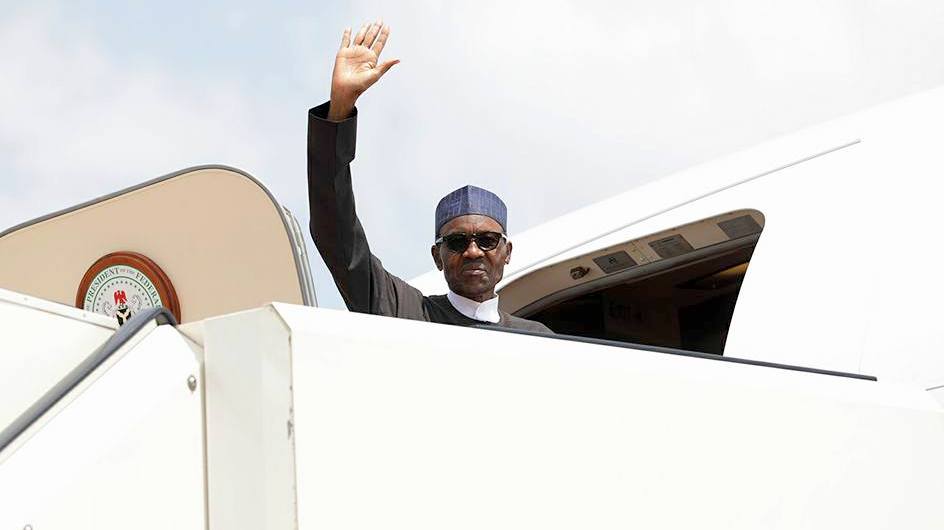 Despite complaints by Nigerians and a critical editorial by one of Nigeria’s most widely read newspapers, President Muhammadu Buhari has chosen to continue his frequent foreign trips.

The president jets out to Saudi Arabia today for a three-day official assignment followed by a two-day personal religious act, his office said on Sunday.

Reliable sources at the presidency told PREMIUM TIMES that after the president returns on Saturday, he will, days later, proceed on a vacation to the UK for about 10 days.

The UK trip is yet to be officially announced.

On Sunday, the presidency announced the departure of Mr Buhari to attend the third edition of the Future Investment Initiative (FII) organised by Saudi’s Public Investment Fund (PIF).

Also, he will proceed to Makkah on Thursday to perform Umrah.

Mr Buhari is not new to criticisms on foreign travels. He spent over one-third of his first three years in office outside Nigeria, according to computation by Punch Newspapers. A large part of that was for medical treatment of an undisclosed ailment in the UK.

In the past three months, the president has travelled at least four times, spending over 15 days.

Although the travels were deemed a priority by the presidency, many Nigerians have argued that the president could have sent few representatives to some of the events, thus cutting cost and having more time to attend to important national issues at home.

Some of his recent foreign trips have been to Japan, Russia, South Africa and the U.S.

From August 26- 31, President Buhari was in Japan for six days attending the Seventh Tokyo International Conference on African Development (TICAD7).

On September 16, he departed Abuja for New York, United States to participate in the 74th Session of the United Nations General Assembly (UNGA74). President Buhari was scheduled as Number Five Speaker on the first day of the debate on climate change. He spent three days in New York.

Early October, the president travelled to South Africa for a state visit and the 9th meeting of the Bi-National Commission between both countries. That visit came weeks after the xenophobic attacks against Nigerians and other Africans in South Africa. Mr Buhari, who spent three days in the country, had earlier sent an emissary to Cyril Ramophosa, South Africa’s President to register the grievances of Nigerians.

Between October 24 and 26, Mr Buhari attended a three-day Russia-Africa Summit in Sochi, Russia.

According to the presidential spokesperson, the event held from a focus on exploring and expanding opportunities in security, trade and investment, science and technology, and gas production.

Buhari and his ‘large’ entourage

Whenever Mr Buhari goes on these trips, he is accompanied by a retinue of public officials, all at the expense of the Nigerian people.

The total cost and expenditure on each of these trips are never made public.

Checks by PREMIUM TIMES showed that on the four trips Mr Buhari embarked on in the past three months, he was accompanied by a total of 12 state governors alongside ministers, designated special advisers, and other travel aides.

According to the 2020 budget proposal, Mr Buhari’s foreign trips for the year will cost N1.75 billion, a significant increase from the N1 billion budgeted for the same purpose in 2019. Conversely, local trips are estimated to cost N775.6 million in 2020.

During the trip to Russia, Mr Buhari was accompanied by Governors Muhammad Yahaya of Gombe State, Bello Matawalle of Zamfara State and Kayode Fayemi of Ekiti State. Others on the trip were Minister of Foreign Affairs, Geoffrey Onyeama, Minister of Trade and Investment, Adeniyi Adebayo, Minister of Mines and Steel Development, Olamilekan Adegbite and Minister of State, Petroleum, Timipre Sylva.

The presidency does not list the retinue of domestic aides who accompany the president on such trips, including photographers, protocol officers, security officers, various media aides and so on.

On the trip to Japan, Mr Buhari was accompanied by Governors Babagana Zulum, AbdulRaham AbdulRazaq and Babajide Sanwo-Olu of Borno, Kwara and Lagos states respectively. There were also ministers and other top government officials on the trip.

For today’s trip to Saudi Arabia, the president will be accompanied by Governor Babagana Zulum of Borno State, Governor Abubakar Bagudu of Kebbi State and Governor Aminu Bello Masari of Katsina State.

In its editorial, Punch newspaper stated that “In moments of national crisis, he (Mr Buhari) abandons his duty post in preference for foreign trips of dubious value.”

“Without opening up the economy and ensuring sound rule of law at home, foreign travels to attract investment is a complete waste of public fund,” the newspaper stated.

In his reaction, Jide Ojo, a public affairs analyst, stated that although its not a crime for the president to ensure that Nigeria is not left out in global discussions, Nigerians are yet to see the significant benefits of the travels.

“Nigerians are yet to see significant benefit of these diplomatic shuttles. What we have heard so far is largely promissory note,” he told PREMIUM TIMES in a telephone interview on Sunday evening.

Mr Ojo said the foreign assignments could also be delegated to relevant ministers or the vice president, Yemi Osinbajo.

According to him, this will afford the president to focus on some of the issues at ‘home’ which border around insecurity, poverty and unemployment.

“I am of the opinion that some of these shuttles could actually have been attended by Foreign Affairs ministers or concerned ministers instead for him to abdicate responsibilities at home for him to embark on all those foreign trip.

“He has a vice-president who is equally able and accountable. We are talking of somebody who is more agile and whose attention span will be higher than the president who is almost becoming an octogenarian.”

Commenting on the expenses incurred during the trips, Mr Ojo advised that Mr Buhari stop being a “father Christmas” with public funds.

“Those governors will go with their own aides. The president will go with at least about 10 aides. All these media handlers, state protocols, state security. If we want to reduce the cost of governance and you are going with a large entourage to some of these international trips, that is a contradiction!”

Many Nigerians on social media have also been critical of the president’s frequent foreign travels.

The president’s handlers have, however, defended his frequent trips, highlighting some of the ‘achievements’ from them.

On Sunday, a presidential media aide, Bashir Ahmad, retweeted a newspaper cartoon that showed some of the commitments the president got for Nigeria on his Russian trip.

Unlike his aides and party supporters, however, many Nigerians are opposed or at best uncomfortable with the frequent foreign trips.

See some of the reactions on social media below.

Buhari and unproductive travels
Abeg what do we have to show for all the previous travels https://t.co/zx0UNo23LX

Perhaps, we should close our border on Buhari not just rice alone.
That guy too travel abba. 😣😒😠😒😠

Perhaps, we should close our border on Buhari not just rice alone.
That guy too travel abba. 😣😒😠😒😠

You know, for an old man, Buhari sure seems to travel a lot.
Off to Saudi tomorrow just after Russia? Oga ooo

You know, for an old man, Buhari sure seems to travel a lot.
Off to Saudi tomorrow just after Russia? Oga ooo

Ever noticed that Presidents who drive sustainable change for their country hardly travel from one country to another? It’s those ones who have no business being president that jump from one place to another, and are mostly African Leaders with Buhari as the chief tourist.

Ever noticed that Presidents who drive sustainable change for their country hardly travel from one country to another? It's those ones who have no business being president that jump from one place to another, and are mostly African Leaders with Buhari as the chief tourist.

What is it with this man and traveling abroad? Must he attend every conference? What’s this nonsense? Is buhari a travel blogger?

What is it with this man and traveling abroad? Must he attend every conference? What's this nonsense? Is buhari a travel blogger? https://t.co/H1GCU72pqj

EDITOR’S NOTE: This story was updated with more details of the planned UK trip after it was confirmed by the presidency.

FEATURE: An encounter with Sierra Leonean who saved 87 child soldiers