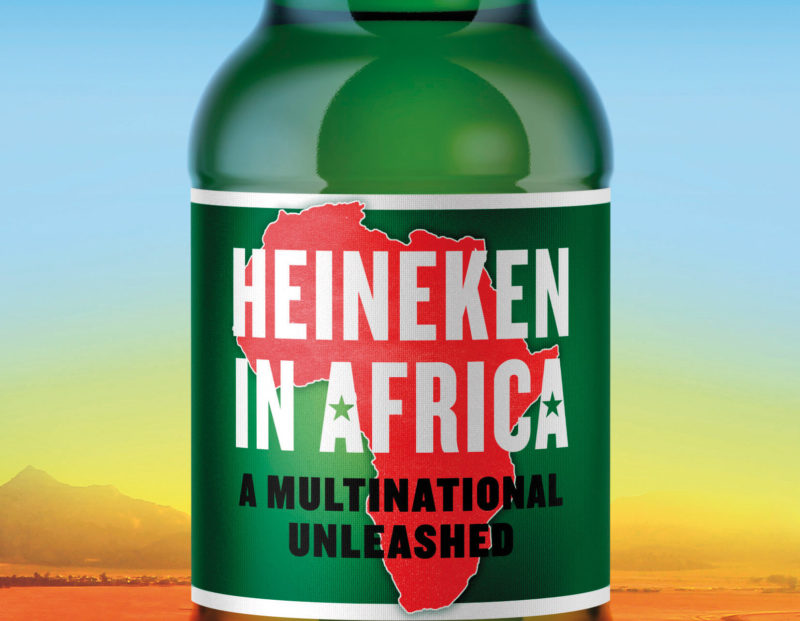 INTERVIEW: Why I investigated Heineken’s activities in Nigeria, other African countries – Dutch journalist

Olivier van Beemen is a Dutch journalist and author of the book Heineken in Africa, who has been researching the African activities of Heineken for more than six years.

He is also the co-author of an investigative piece on the activities of the former Dutch head of Nigerian Breweries, a subsidiary of Heineken. He is currently in Nigeria to promote his book.

In this interview with PREMIUM TIMES, he speaks about his thought-provoking book and other sundry issues

PT: What inspired your award-winning work, Heineken in Africa, which came out this year in English?

Olivier: I was in Tunisia to cover the downfall of the dictator Ben Ali. There I discovered that Heineken was in a partnership with a businessman with ties to the presidential clan. What was most striking to me was that Heineken lied about this. The beer company claimed it didn’t know the businessman was linked to the regime, whereas I knew these ties were the main reason for the partnership. The fact that such a big multinational with a good reputation could lie so easily to a journalist and thought they could get away with it, motivated me to look for more. What else were they hiding and is this company really ‘brewing a better world’, as they claim? It turns out that Tunisia was only the tip of the iceberg.

PT: In the Netherlands, you published two books on Heineken. What inspired you to continue digging?

Olivier: After my first book in the Netherlands, new sources came to me. They realised it was a serious book about the challenges of a multinational in Africa and pointed me to aspects I had overseen and to new scandals. It was also valuable that Heineken itself now decided to cooperate and grant me interviews with their CEO and other important Africa managers. The new book, which includes the most important information of the first, is more accessible. This is the version that’s now available in English. The Roving Heights bookstore here in Nigeria told me it’s even a bestseller.

PT: You have been researching the African activities of Heineken for more than six years. What overwhelming challenges did you encounter along the way?

Olivier: They were indeed numerous and sometimes overwhelming: getting the funding for travelling to Africa many times, finding reliable sources, Heineken not willing to participate at first… Then it was also quite intimidating when a company of that size – their global revenue is almost 30 billion US dollars – ‘strongly discourages’ you to publish some of the stories. However, I still published them and nothing happened afterwards. They know my stories are true. In an interview with the French magazine Jeune Afrique, the regional director Africa, Roland Pirmez, said Heineken excludes suing me because it’s too risky for them.

PT: What was the reaction of the Dutch government to the expose?

Olivier: Dutch government is involved in a number of partnerships with Heineken and Dutch embassies consider it their main task to help our own companies. I think that internally, they have their doubts about the way Heineken is operating in Africa, but they still support them. I personally think that governments should be more critical towards companies, also if they’re from the same country. But in the Netherlands, we’re not very good at that.

PT: Are you satisfied with the reaction and response of the Nigerian government to the report?

Olivier: I’m not sure they’ve responded. Maybe you could ask them?

PT: What type of responses would you have expected?

Olivier: I hope my visit to Nigeria contributes to making people aware of what foreign companies are doing, also the ones that claim to be responsible and sustainable, like Heineken. Multinationals often blame their bad behaviour on local circumstances. “There’s a lot of corruption here, we have to adapt.” But it’s not as simple as that. They claim to be victims, but they’re often the perpetrators. What’s interesting is that Nigeria is one of the most profitable countries in the whole world for Heineken, even more so than the US, the UK or the Netherlands. According to the latest available results for Africa alone, Heineken earns almost 50 per cent more in Africa than globally. My book shows that there’s structural malpractice and that they’ve become complicit in numerous alleged crimes, including a genocide.

PT: The Board of Nigerian Breweries and HEINEKEN claimed to have conducted an internal and external audit into your findings but failed to indicate if it found Mr Vervelde culpable or not. Did this come as a surprise?

Olivier: The case of the former CEO of Nigerian Breweries, the local Heineken Company, is very interesting. According to many sources in and around the company, Nico Vervelde’s wife asked commissions in exchange for contracts with the company. Sources within the police told me this could have led to up to 7 years of imprisonment for the Dutch CEO. Heineken didn’t really defend them. The company only says that the Verveldes themselves claim their innocence. The company avoided a court case by settling the case for a few million dollars.

PT: From your findings, what are your thoughts on how multinationals are doing business in Africa albeit Nigeria?

Olivier: A multinational like Heineken should set an example of how business is done correctly, but they do the very opposite, both in Nigeria and in other African countries. We didn’t speak about the promotion of women yet.

There are thousands of young women across the continent who promote Heineken and other brands in bars and clubs. While doing that, they have to accept sexual harassment as part of the job. Some of them even have to sleep with bosses if they want to get the job and they even prostitute themselves because they earn so little. Heineken is aware of this problem for almost 20 years now but has mainly ignored it.

You have to know that CEO Jean-François van Boxmeer had – what he calls – “a consensual love relationship” with a promotion woman himself when he was a manager in Congo. He now says that #MeToo is a western phenomenon and he’s pointing at “cultural differences”. He stated that these days, the company can’t hire promotion women in Western Europe anymore.

But apparently, in Africa, it’s perfectly acceptable to put women at risk of predatory behaviour. Maybe the strangest moment in my investigation was at the annual shareholder meeting last year in Amsterdam, where he admitted my revelation about his relationship was true. The reaction of the shareholders? They applauded him…

PT: Tell us more about your investigative reporting career?

Olivier: Heineken in Africa was my first big investigative job. I hope there’s more to follow. I think it’s really important that journalists always question the claims of multinationals, especially if they use slogans like ‘brewing a better world’ or ‘growing together in Africa’. It’s often the wealth of the shareholders in Europe and America that’s growing, not ‘Africa’. Corporate social responsibility can easily be abused as a marketing tool.

PT: A major challenge militating against the practice of investigating journalism in Nigeria is corruption & access to data. What’s it like in the Netherlands?

Olivier: Well, the climate for journalists in the Netherlands is definitely better than in most African countries. I realise that in Africa it can often be life-risking to investigate corporate interests, whereas I don’t feel threatened when I cycle around in my hometown Amsterdam, which is also where Heineken is headquartered. But even in our country, authorities are not very cooperative. For every journalist, you have an army of PR people who try to spin stories their way. Heineken sometimes invites journalists for dinner in a luxurious restaurant – they also tried that with me. Or they are invited to watch a Champions League match at the Ajax stadium. It’s maybe more subtle than in Africa, but I think it’s also a form of corruption if you accept such invitations.

PT: You are also a guesting at Ake Festival. Tell us more about your session.

Olivier: I will present my investigation and answer to all possible questions:  Keith Richards, the former CEO of Guinness Nigeria who recently published his memoirs, will also be in the panel. All readers are more than welcome to join us on October 27 at 1 p.m. I will also present my work at the Roving Heights Bookstore in Abuja on October 29, at 5.30 pm. On both occasions, signed copies will be available!

PT: Aside from Premium Times, not many Nigerian news outlets are committed to & are at the forefront of uncovering shady practices, corruption & injustice in the Nigerian business and political terrain. What are your thoughts on this?

Olivier: My respected colleague Femke van Zeijl and I were really happy that Premium Times published our story on the Heineken corruption case in Nigeria because we think that Nigerians should know about this. During my investigation, I often noticed that Africa has very capable and knowledgeable journalists, but they often don’t have the possibility to publish everything they know. Newspapers depend on payments of politicians, companies and other organisations to survive. I wish that could change, but even in Europe, independent journalism is going through rough times.

PT: What is your thought on the Nigerian business/political terrain? Where do you think the problem lies? Is there any hope for us? What do you think can be done?

Olivier: There’s always hope! I think my investigation shows that politicians should be wary about dealing with big companies – even if they show good intentions and have a good reputation. A company like Heineken has various mechanisms to extract a lot of money from Nigeria: transfer pricing, royalties, technical services. The Nigerian Heineken subsidiary is called Nigerian Breweries and many people think Star is a Nigerian brand. But in the end, most of the money ends up in the pockets of European shareholders. In return, the company encourages Nigerians to drink even more alcoholic beverages, causing domestic violence and health-related problems. The costs for society are probably a lot higher than the tax money Heineken is bringing in. I think it’s important to create awareness about such realities. That should make improvements possible.