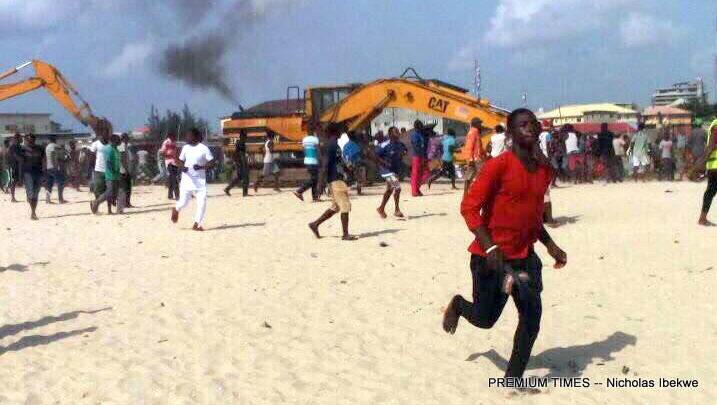 On June 21, 2017, Justice Adeniyi Onigbanjo of the Lagos High Court ruled that the forced eviction of tens of thousands of people from the Otodogbame waterfront slum in Lagos was unconstitutional. The judge also ruled that the rights of those evicted had been violated as there was no resettlement plan in place.

After that judgement, a crowd of excited women and children gathered in front of the Lagos High Court in Lagos and sang in their native Ogu dialect and danced.

That day, what had become months of endless struggle for justice appeared to have come to an end.

However, more than two years after the court delivered its judgement, the government has failed to comply with it as the affected people remain displaced.

Otodogbame is one of the many informal fishing settlements in Africa’s most populous city, Lagos. The community was emptied in violent waves of demolition that began in November 2016.

In March 2017, the homes of about 5,000 people had been razed to the ground, with reports of people being chased into the water on boats.

In that ruling, Justice Onigbanjo ordered the government to cease evictions and pay compensation.

“Both the compensation and resettlement orders have been ignored by the government,” Elijah Atinkpo, one of the evictees, told PREMIUM TIMES.

Mr Atinkpo now lives around Yaba-Akoka axis of Lagos where he helps with advocacy on the need to seek justice for the evictees while pursuing other career-related concerns.

He told this newspaper that due to poor access to justice, the evictees are now scattered across crowded communities in Lagos, living in misery.

PREMIUM TIMES spoke with evictees in some of these communities which include Isale Ijebu, Okera Nla, Okera Kekere, Ijoyi, Badore, and Sangotedo—–all in Ajah axis of the state.

The first major demolition occurred in the early hours of November 9, 2016, when some boys with reported ties to the Elegushi chieftaincy family entered the community and set fire to houses.

The destruction occurred a day after a Lagos court ordered the state government to immediately suspend its planned demolition of shanties. It was barely a week after the state house of assembly appealed to former Governor Akinwunmi Ambode to reconsider his demolition plans.

Earlier, on October 9, 2016, the government had announced plans to demolish shanties, as part of a state-wide policy to clear up to 300,000 people from informal waterside settlements.

The Justice and Empowerment Initiative, a group that has been canvassing for justice for those affected by the evictions, said about 800 homes were torched in the November attack and about 10,000 people rendered homeless.

According to Amnesty International, witnesses said some residents drowned in the nearby Lagoon as they ran to safety amid the chaos.

By November 2015, the community again went to court against the Elegushi family and the Lagos State Government on land matter.

The Elegushi, an ancient royal family that has ruled over the area known as Ikate since 1606, has long claimed ownership of the land occupied by the Otodogbame evictees.

The court case was followed by a peaceful protest staged in March 2016, in reaction to dredging activities affecting their homes.

On October 18, 2016, Otodogbame and 14 other waterfront communities approached the court to enjoin the government to stop its demolition threat.

Weeks after, on November 7, the Lagos State High Court issued an injunction against the demolition of the waterfront. But two days after the court injunction, between November 9 and 10, the government forcibly began the eviction, in contravention of court order.

On January 26, 2017, the Lagos State High Court issued an interim ruling pronouncing the eviction as “cruel, inhuman and degrading…”

By March 21, the Military, Mobile Police, Lagos Task Force and other government forces returned to continue the demolition, amidst tears and cries.

The next day, a protest was staged by women in the community and rather than compelete the demolition, the government forces retreated.

But around 6 a.m. on April 9, 2017, without prior notice, the Task Force again invaded Otodogbame, setting the remaining houses on fire.

They also chased residents in boats deep into the lagoon by shooting teargas and bullets. Unconfirmed reports said an evictee was shot dead and thousands were finally rendered homeless.

The April eviction attracted scathing criticisms from rights activists and international bodies, with many calling on the government to cater to the needs of the people and respect court orders. Amidst pressure, the government promised to resettle the evictees.

After months of failed promises, in November 2017, the people stormed Lagos House in Alausa, Ikeja to protest the delay in their resettlement.

In his reaction then, the former Commissioner for Special Duties and Inter-Governmental Relations, Seye Oladejo, said the government was aware of the peoples’ pains and would ameliorate their plight.

When PREMIUM TIMES spoke to residents living in crowded slums, they said nothing had come out of the promise, two years afterward.

In May 2018, to hasten the course of justice, evictees staged a rally and appealed to the General Overseer of the Redeemed Christian Church of God, RCCG, Enoch Adeboye, to help appeal to Vice President Yemi Osinbajo, a lawyer.

During the rally, a letter was delivered to the RCCG church in Oyingbo area of Lagos and many of the evictees said they were members of the church. Nothing came out of the move.

Megan Chapman, the co-director of JEI, told PREMIUM TIMES that the government claimed that it appealed the June 2017 judgement that rendered its eviction “unconstitutional”.

No date was ever fixed for the hearing of the appeal, she added. Ms Chapman, who has been overseeing the legal issues, said it was a ploy to delay the course of justice and frustrate the case.

Meanwhile, as access to justice remains problematic for evicted residents of Otodogbame, many of the evictees are living in pain and sorrow.

Last year, PREMIUM TIMES captured how the evictees were living in crowded Lagos slums. The report showed that many of the children had been evicted from school as their parents wallowed in poverty.

Kunnu Paul, who now squats in one of the communities around Badore area of Ajah, told PREMIUM TIMES that life has been horrible since the eviction.

“When the Otodogbame eviction occurred, they destroyed my school building worth N300,000,” he said. “I have never recovered from the shock.”

Mr Kunnu now lives in an uncompleted building together with his wife and daughter, he explained. “I am finding it difficult to gather things back,” he said.

Same was the situation with Dansu Hunpe, another evictee who now resides in Okera Nla, as well as many others in the various communities across the state.

Similarly, for Nasu Abdulaziz, things have not been the same since the eviction.

Abdulaziz now lives in one of the communities in Oreta area of Ikorodu while he struggles through school at a digital design academy. He told PREMIUM TIMES that it has been difficult to live and study.

On April 9, Otodogbame evictees held a rally in commemoration of the 2017 eviction, Mr Elijah told this newspaper. They also used the occasion to request an expedited hearing of the government’s purported appeal of the court ruling, he added.

“We have gone to the courts several times… but justice still remains elusive. It’s frustrating,” Mr Kunnu said. He explained that his experience has shown that, in Nigeria, getting justice is quite difficult for the common man.

No reaction from authorities

PREMIUM TIMES efforts to reach the Lagos State government for its position on the long-running case proved abortive.

When this newspaper telephoned the state commissioner for information, Gbenga Omotoso, earlier in the week, he told our reporter that he is still new on the job and would need more information.

Several hours afterward, this reporter reached out to him yet again and he promised to reach out to the state Attorney General and get back to our reporter. When contacted again, the commissioner said that the Attorney General said he would get back to him. “We are new, you know,” he told PREMIUM TIMES in a text message. “My apologies”.

More than 48 hours afterward, PREMIUM TIMES is yet to receive a response from the commissioner.

Ms Chapman told PREMIUM TIMES that the request by lawyers to ensure the speedy hearing of the case has yielded poor result due to delay.

According to her, the new time fixed for the hearing is September/October 2020. She expressed worry over the development and lamented the state justice system in the country.

Rasheed Shittu, a paralegal officer and activist, told PREMIUM TIMES that access to justice remains a daunting challenge in the Nigerian justice system, especially if it involves the poor.

Mr Shittu has helped in the area of advocacy and sensitisation in the Otodogbame case. “It is really pathetic,” he said of the experience thus far.

On his part, the Executive Director of Human and Development Agenda (HEDA), Lanre Suraj, told PREMIUM TIMES that “Lagos is notorious for eviction of its citizens in different parts of the state”.

“The case of Otodogbame is not different from what has been Lagos State relationship with its citizens,” he said. “For you to get justice… it is extremely difficult.”

This report was supported by The Premium Times Centre for Investigative Journalism.

SBMC: Inside story of Nigeria’s scheme to reduce out-of-school children in Kano