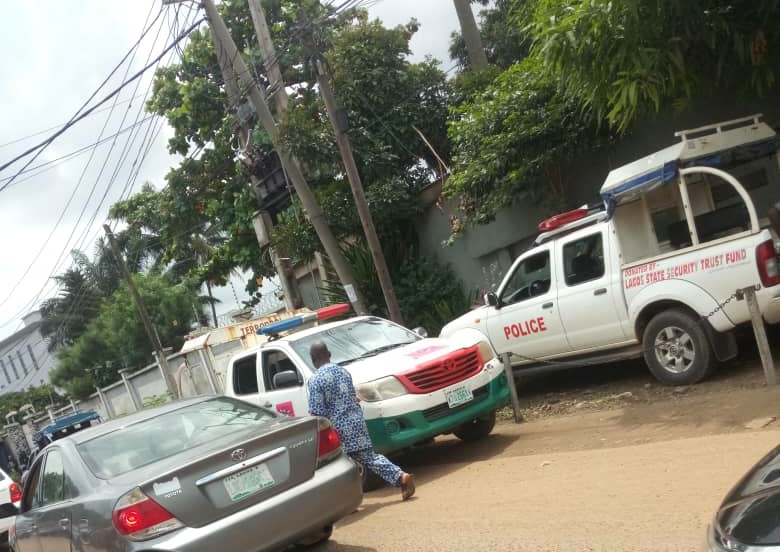 The Nigerian police on Wednesday laid a siege to the offices of news platform, Sahara Reporters; and rights group, Committee for the Defence of Human Rights (CDHR), in Lagos as rights groups condemned the development.

Fully armed police contingents arrived at about 6 a.m. at the national secretariat of CDHR at Adeniyi Jones, Ikeja and the office of Civic Media Lab at Isaac John, GRA Ikeja where Sahara Reporters is assumed to be domiciled.

The security operatives were still there at the time of this report.

They are believed to have gathered at both offices to prevent a protest planned to demand the release of activist Omoyele Sowore from prison.

However, when PREMIUM TIMES reached out to the spokesperson of the Lagos Police Command, Bala Elkana, he said the deployment of police to the areas was to serve as protection and ensure that law and order were maintained.

“They are there to provide security and ensure that there is no breach of peace”, he said curtly.

When this reporter visited Civic Media Lab location, two police vans with at least 10 fully armed police officers in them were stationed directly opposite the gate.

Also at the CDHR national secretariat, six police vans with at least 25 fully armed officers were on ground. Four of the vans parked in front of the gate of the building housing the secretariat while two parked directly opposite the building.

A reporter with SaharaTV told PREMIUM TIMES that the security guards of the property locked down the building when they sighted the police contingent.

“We never had any confrontation with the police, we just saw them in front of our gate. What caused this is the protest organised by Coalition for Revolution. Sahara TV had two of the conveners on air and they felt probably the TV will be a staging point for some of those actions,” said the reporter who requested not to be named.

“They banged on our gate but nobody came out. They started harassing people in front of our office, passersby who were just going about their duties.

“None of our crew members could get in. We have some of our staff members who worked overnight in, they couldn’t get out.

“The building’s security men simply used their discretion by locking up totally to avoid indiscriminate arrest of workers when police officers started banging on the gate, commanding people to come out without giving any reason.

“They were just shouting that everyone should come out and that they were under arrest, but they didn’t present any warrant to that effect. So the security guards locked up the building and since the police have refused to leave, no one is able to go in or out of the building.

“Although they demanded that people should come out of the building, they never said why that should be the case.”

The reporter, who said he was just arriving for work and had not accessed the building, said a few workers were able to sneak out when the police left their gate for a few minutes.

“They left for some minutes and we were able to evacuate a few workers from the building. They came back and didn’t leave the gate until other media houses started coming and asking what was happening before they stepped back from the gate and went opposite the building.”

When PREMIUM TIMES reached out to the President of CDHR, Malachy Ugwumadu, he condemned the siege by the police.

“The news of the invasion of the national secretariat of CDHR has come to me as a very rude shock. The Nigerian state is gradually slipping into an autocratic mode in which case they must remain very intolerable to any form of organised groupings, including divergent views.

“But to now reverse the gains we have made over 30 years ago regarding our fundamental rights to freely assemble and associate is a very sad commentary.

“I condemn the siege that is presently placed on the national secretariat of CDHR. If there is any reason why they came there at all, that reason must have been a public information. You don’t plan anything untoward and then give a public notice to that effect.

“Therefore, if Nigerians have agreed to meet at the national secretariat of CDHR that has consistently played the same role even under the military for 30 years, I do not see any justification for this and we are going to find out exactly why our office was condoned off this morning as early as 6am and they are still there. I will put a call across to the commissioner of police as to why such action was taken or necessary.”

He said there was no justification for condoning off or restricting people from accessing their legitimate place of business.

“The condoning off of the Sahara Reporters building is a bit excessive. Whatever it is that they have by way of their beat as security operatives, it cannot justify the violation of the rights of Nigerians to have free access to their legitimate business area.”

“Remember that the national secretariat of CDHR also has other companies and concerns housed in the same building. It is a huge building, so why not invite the leadership of the organisation, why will you seal off the place and make a mockery of yourself?

“People who are issuing notices to have meetings are terrorised, those who are in the bush terrorising the country are now being paid in the form of amnesty. It is a big contradiction. These are vestiges of the state we have long passed where the military is riding roughshod on our rights, we won’t take it.

“They should give us the reason for their actions because this is reminiscent of the military period. We have never had it this chaotic since that period and I believe it is condemnable and unacceptable and they need to apologise for their actions, otherwise we will all hear from ourselves one way or the other.”

Speaking on the siege, Olaseni Ajayi, co-covener of Coalition for Revolution (CORE), said the actions confirmed that the rights of Nigerians are no longer guaranteed under this dispensation.

“The right to speech, associate, protest and even to think are no more guaranteed under this neo- regime. It is crude and confirms everything we have been saying about this regime and the situation in Nigeria.

“However, our agitation for the immediate release of Omoyele Sowore, Agba Jalingo, Abayomi Olawale (Mandate) and all others currently being held in Buhari detention centres, and for the revolutionary transformation of the country continues.”

Meanwhile, the Socio-Economic Rights and Accountability Project (SERAP) has called on the federal government to lift the siege.

In a statement released by its deputy director, Kolawole Oluwadare, the group said: “Nigeria’s authorities should immediately lift the siege to the offices of Sahara Reporters and Committee for the Defence of Human Rights (CDHR), end the illegality and allow journalists, activists and civil society to operate freely.”

“Nigeria’s security agents and state governors should also immediately stop the nationwide campaign of arbitrary arrests against journalists, activists and protesters. The attack on Sahara Reporters and CDHR is coming on the heels of staggering crackdown on critics, journalists and activists by many state governors.”

The group said the government is increasingly targeting journalists, critics and activists, stating that it is an obvious attempt to silence investigative journalism.

“The federal authorities and many state governors are targeting journalists, critics and activists, in clear violation of Nigeria’s Constitution of 1999 (as amended), and international obligations, as a party to the International Covenant on Civil and Political Rights to requiring the authorities to respect fundamental rights and the rules of law.

“These attacks are clearly aimed at silencing the kind of journalism and investigative reporting that makes federal and state governments uncomfortable. President Muhammadu Buhari now needs to make clear that he doesn’t want any part of this kind of behaviour and that unacceptable and dangerous threats and attacks against journalists, protesters and activists will be fully investigated.”

SERAP also called on the international community to intervene in the situation in Nigeria.

“The international community including the African Union, the UN human rights special mechanisms and Treaties Bodies, the African Commission on Human and Peoples’ Rights as well as Nigeria’s international partners can and should push for an end to the escalating crackdown on journalists, bloggers and activists, and for investigations and prosecutions of those responsible for the intimidation, harassment and attacks.

“Otherwise, when state security forces arbitrarily arrest and detain brave journalists and protesters like Agba Jalingo, Omoyele Sowore, and Mary Ekere and continue to get away with it, they benefit from a climate of impunity.”

“These journalists are prisoners of conscience who must be released immediately and unconditionally.”

“We strongly condemn the arrest of Mary Ekere of The Post, for taking photos of task force officials who raided a city spot, and Agba Jalingo, Editor-in-Chief and Publisher of CrossRiverWatch, following his publication of an article asking Governor Ben Ayade of Cross River to come clean on the whereabouts of the N500 million that was released for the State’s Microfinance bank.”