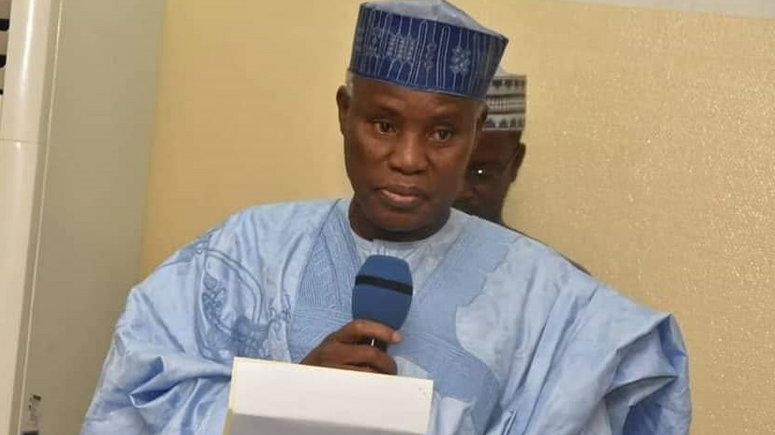 Demands intensified this week for the sack of Bashir Magashi as President Muhammadu Buhari’s defence minister, fuelled by a PREMIUM TIMES report that uncovered his sordid past as one of those who stole Nigeria’s wealth under dictator Sani Abacha.

The article, published exclusively on Wednesday, detailed how Mr Magashi, a retired major-general, stole a huge amount of public funds during Mr Abacha’s junta and banked it abroad, a method typical of both Mr Abacha and others who stole under him.

At least $550,000 of the stolen fund by Mr Magashi was later detected by former President Olusegun Obasanjo’s investigation of the now infamous ‘Abacha Loot.’ About $3 billion of the Abacha Loot had been recovered out of at least $5 billion estimated by Transparency International.

Of the $550,000 (N200 million today) that was traced to Mr Magashi, he was immediately asked to return $400,000 and keep the rest to himself — an arrangement he accepted after pleading with the administration not to file fraud charges or take any action that would humiliate him before Nigerians.

The retired military chief headed several strategic departments throughout his career, including as commander of the elite Brigade of Guards and the Nigerian Defence Academy (NDA).

Although Mr Magashi, 74, remained politically active post retirement — running for governorship in his home Kano State and playing top roles as he criss-crossed political parties — he did not hold any consequential position for two decades until Mr Buhari unveiled him earlier this month as one of his new cabinet ministers.

The ministers took official oath last week, and Mr Magashi appeared first to be busted for fraud, marking yet another indication that the State Security Service (SSS) did not properly scrutinise the ministers during the nomination process to establish their fitness for office.

Mr Magashi declined multiple requests for comments from PREMIUM TIMES, and presidency officials also failed to speak on the record to confirm whether or not the president had prior knowledge of the corrupt past act of his problematic appointee.

Nigerians have stated their outrage since the publication, with many calling on the president to waste no time in dismissing the defence minister.

“The question at this point is not about whether Mr Magashi would make a competent defence minister considering his military background,” political analyst Sola Olubanjo told PREMIUM TIMES. “It is about his corrupt past haunting and distracting him from his serving the country at a time of acute insecurity.”

“We cannot allow affliction to resurface under an administration that is throwing resources at fighting corruption,” Mr Olubanjo added.

Nigerians on social media have also been gripped by the revelations, calling for the immediate ouster of Mr Magashi.

They noted the unsatisfactory performance of the SSS at running a background check on potential cabinet members and other senior administration officials at both national and local levels. (The reactions are published unedited by PREMIUM TIMES)

On Twitter, @AbBaminu32 said: “I’m beginning to lose confidence in this is govt. Why is it that any criminal is giving a portion to continue the deadliest act of looting? 80% of the present cabinets members are thieves and open ones. Some are quashed off their trials as they joined the party. This is bad!”

Another user, @Onuoha92032056, mocked Mr Buhari for not showing any disdain for persons tainted with graft: “If @GovUmarGanduje Hadn’t won his re-election… @MBuhari Would have made him a minister…! For the buharist continue deceiving yourselves..!”

Another user feared the president may not do anything to Mr Magashi because he is not a member of the opposition: “@Rony37220245, They only people that are looters by buharideens are PDP members APC is “saints”.This goes a long way to suggest that APC and Buhari is not fighting any corruption. They are romancing corruption.”

This user also deployed sarcasm in his reaction: ” The man did not commit any crime here. Abacha settled him and Obj asked him to return some and keep some. Talk about Ameachi, Akpabio, Fashola, short man from Osun state. Why is a saint working for Buhari RUGA?”

Gimba Kakanda, a public affairs commentator, also weighed in on Twitter: “Premium Times is proving to be more “investigative” in digging out the offensive secrets of our public officials than the very DSS tasked with such responsibility. They dug out Kemi Adesoun’s certificate forgery, and now General Bashir Magashi’s role as a part of the Abacha loot.”

On Facebook, Chris Finebone, a spokesperson for the ruling All Progressives Congress in Rivers State, also slammed the SSS for its sloppiness.

Premium Times wrote on Bashir Magashi's involvement in corrupt practices during the Abacha regime. A thing like this wouldn't have escaped thorough scrutiny without some cover ups by relevant agencies/institution. Now that it is public, Nigerians deserve an explanation.

Bashir Magashi, a man with a $550,000 money laundering allegation hanging on his neck is now Buhari's Minister Of Defence

The Presidency is " not aware"

But they are all aware of a fictitious Sowore's Dubai meeting https://t.co/C5MS1K8Uxt

Do you remember Maj Gen Bashir Magashi(Rtd) who 'helped' himself to $550,000 from an oil deal but coughed out $400,000 to avoid prosecution during OBJ regime, is now Minister? What a way to fight corruption!