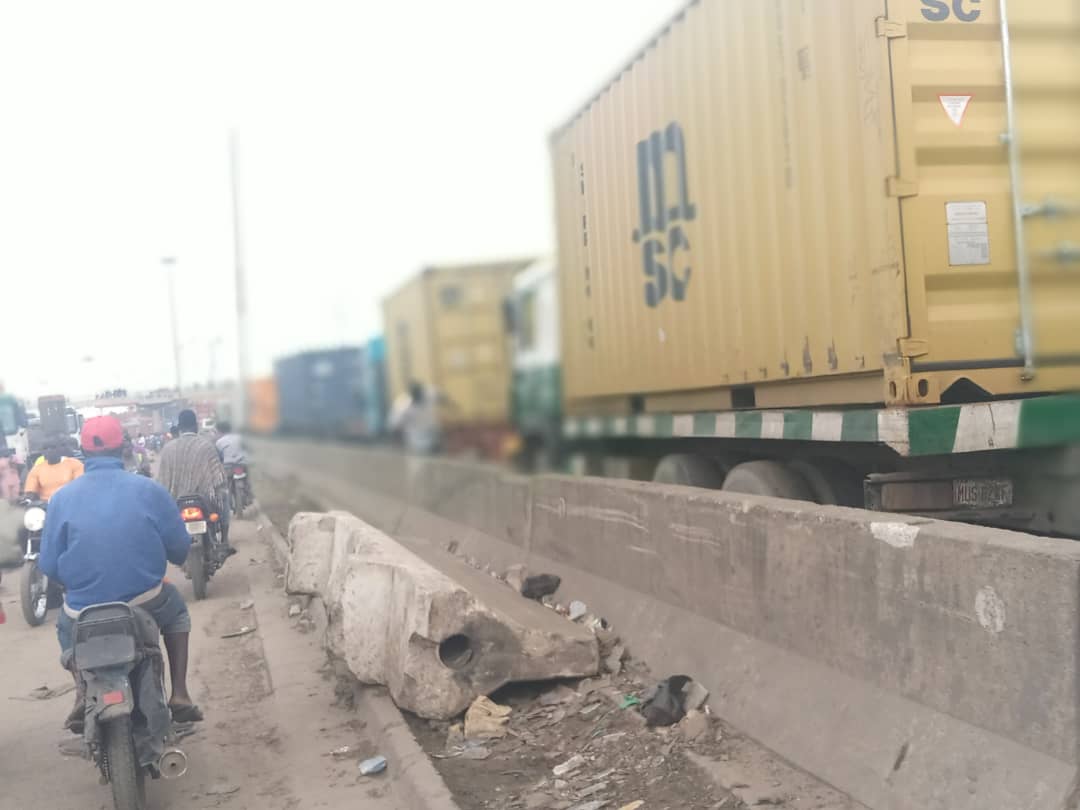 Trucks on the Oshodi-Apapa port road

The access roads to Apapa and Tin Can ports have continued to be littered with tankers and trailers three months after President Muhammadu Buhari issued a directive for their immediate evacuation.

On May 22, the president ordered “the immediate removal of all trucks from the bridges and roads within Apapa and all adjoining streets leading into the Apapa axis.”

The directive mandates the immediate removal of all trucks from the bridges and roads within Apapa and all adjoining streets leading into the Apapa axis.

NOTICE: A Presidential directive has been issued for the immediate clearing up of the Apapa gridlock and the restoration of law and order to Apapa and its environs within 2 weeks.

The directive was aimed at easing the gridlock on the Apapa routes and to restore sanity to the environment.

Checks by PREMIUM TIMES this week showed that a huge number of trailers are still parked on the roads leading to the ports.

Along the Apapa-Oshodi expressway, the trailers are parked from Second Rainbow bus stop through Mile 2, all the way to the Tin Can port.

The road between Mile 2 and Tin-Can is largely inaccessible to motorists while commercial motorcyclists weave dangerously between parked tankers and trailers as they journey from Tin Can First Gate to Apapa.

A truck driver who preferred not to be named told PREMIUM TIMES that there has not been any significant change since the president’s directive in May.

“I have been a truck driver for 11 years, although, there is always a delay when entering the port but it has not been as bad as we have now.”

While blaming the bad roads for being partly responsible for the delay in accessing the ports, the driver faulted the activities of touts and uniformed officers who usually demand bribes before granting them access.

There has been a slight change from two months ago when PREMIUM TIMES first monitored compliance with the president’s directive, as many trailer drivers maintained that they still spend more than a week just to move a kilometre from where they were.

Matthias Oko, an official of the Federal Road Safety Commission (FRSC), said the movement of the trailers had been slow and the presence of area boys had not helped the process.

“They often engage in serious fights that cause a lot of delays,” he said.

The official, who was posted to the Tin Can port two months ago as part of the decongestion strategy, said their presence, as well as that of the other agencies, had helped to ease the traffic.

An official of the Lagos State Traffic Management Authority (LASTMA) told PREMIUM TIMES that the presidential joint task force team maintaining the flow of traffic are working with a one-lane policy to manage the congestion of trailers on the Apapa road.

“We have a joint task force headed by the vice president represented by Kayode Opeifa. We have a presidential taskforce team including police, Road Safety (FRSC), LASTMA and mobile police officers,” said the official who identified himself simply as Ariyo.

“We are to maintain a one-lane policy so that other vehicles can navigate the rest of the road. It is expected that all the flat bodies should go to Lilypond (terminal) at Ijora, and whenever there is a chance for them to enter the port to pick up their container, they will just go straight from Lilypond to wharf straight.”

Mr Ariyo said only tankers and trailers with a call-up number into the ports are allowed to park on the road.

”They have to have a call-up to come and pick up their container at the warehouse before they leave Lilypond,” he said.

“The traffic has been moving fine this way but I hear there is a problem with AP Moller (terminal) at the gate so the traffic is slow but you can see it’s one lane and other vehicles are using the other lane and everything is moving.

“Within 15 minutes of leaving Lilypond, a flat bed should be able to gain access to the port if there is no traffic.”

Another LASTMA official, who requested not to be named, described the Apapa road decongestion effort as tedious.

“Trucks break down at any time, some truck drivers get to the front of the port, park there and disappear, making it difficult for other trucks to pass,” said the officer who was posted to the port last month.

“This (Tin Can) is the only place that is a bit free and this is because there are officers here. Other places are choked.”

He said there are limited spaces available for the large number of trucks waiting to access the ports.

“This is the major reason why there is gridlock. We can’t push them away, most of them want to come here. That is why you hardly see a normal vehicle pass through, you can’t even see.”

But a staff of the Nigerian Port Authority, who identified himself simply as Nelly, blamed the congestion on the slow pace of the port workers in “passing the trucks.”

“Some of the trucks want to offload and carry another cargo while some are just going there to offload, this consumes time and we have a large number of trucks,” he said.

On LASTMA official’s claim that the drive from Lilypond Terminal to Apapa port, a five-kilometre distance, takes 15 minutes, a trailer driver told PREMIUM TIMES it took him three days.

“I’m just coming out of the wharf now,” said the driver, who identified himself as Olamilekan,

”I left Lilypond since three nights ago and I’m just coming out of the port now. It’s even a little better now, before, even after collecting call up, you can spend a week from Lilypond to pick up at the wharf.

Mr Olamilekan, however, said there had been a slight improvement compared to the previous months.

“This used to be something we do within a day but now it is impossible to accomplish in a day.”