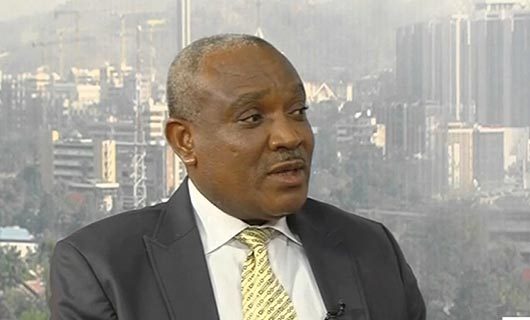 The police have sealed Okoi Obono-Obla’s office in Abuja.

Mr Obono-Obla is a senior special assistant to President Muhammadu Buhari, as well as the chairman, Special Presidential Investigation Panel on the Recovery of Public Property.

The office of the presidential panel, located in Asokoro, was sealed Friday afternoon by some armed police officers, a source close to Aso Rock and the panel told PREMIUM TIMES, Saturday evening.

The source said the police action followed a directive from the presidency that Mr Obono-Obla should be relieved of his appointment “immediately”.

The source said Mr Obono-Obla is aware of the communication relieving him of his appointment but that he has been dodging it so he could use the holiday period to persuade people close to Mr Buhari to talk the government into rescinding its decision.

“They have asked ICPC to start investigating corruption allegations around him.

“The police were brought in to restrict movement in the office, so nobody would tamper with evidence while investigation is going on.

“The panel is still in place, it’s only Obla that has been removed,” the source said.

“They have built a case of corruption and overzealousness against him over time, it’s not an emergency action, so it may be difficult for the decision to be rescinded,” the source said further.

PREMIUM TIMES has, however, not been able to independently confirm if Mr Obono-Obla has been sacked from office.

Mr Obono-Obla was evasive in his response, when PREMIUM TIMES contacted him, Sunday morning.

“I don’t know about that,” he responded when asked if it was true he had been sacked from office.

“If they removed me, they would give me a letter? Is it not so?”

Mr Obono-Obla, however, confirmed his office had been sealed by the police.

He said he was in his office on Friday but later left for the holidays in his hometown in Cross River State before he received information about the sealing of the office.

“People at the office told me somebody came there, said he is the area commander, he has instructions that nobody should enter and nobody should leave. But that is rubbish. Is that how things are done?

The police spokesperson at force headquarters, Frank Mba, did not respond to calls and text message sent to his phone line by a PREMIUM TIMES as at the time of filing this report.

Mr Obono-Obla’s anti-corruption job has often been steeped in controversies which overshadowed some of the successes recorded by his office.

At some point, he had to spend time to fight off allegations that he forged his secondary school certificate.

An ad hoc panel set up by the House of Representatives, December last year, had asked President Muhammadu Buhari to sack Mr Obono-Obla over the forgery allegation.

The panel had also accused Mr Obono-Obla of corruption.

But Mr Obono-Obla had said at the time that the forgery and corruption allegations against him were merely a witch-hunt by people who were uncomfortable with his anti-corruption fight.

PREMIUM TIMES on Tuesday published an exclusive report on how correspondence between Mr Obono-Obla’s office and the Confederation of African Football (CAF) led to the exit the president of the Nigeria Football Federation (NFF), Amaju Pinnick, from CAF leadership.

Mr Obono-Obla is known in the past to have disobeyed the directive of Nigeria’s Vice President Yemi Osinbajo regarding his anti-corruption job.