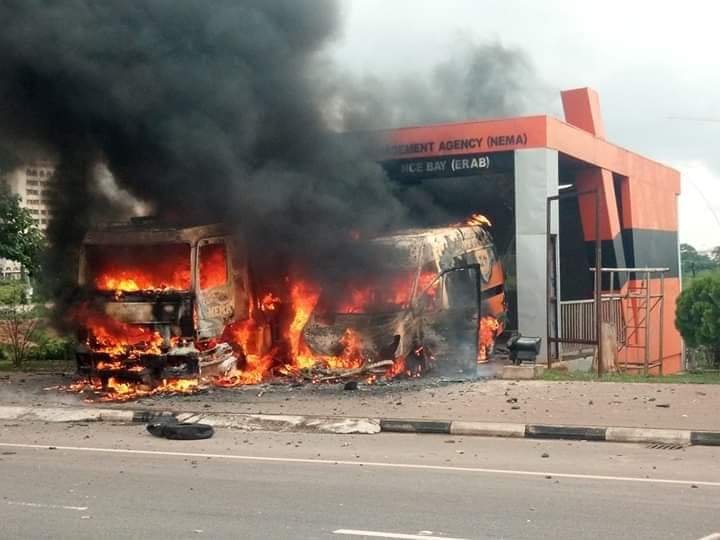 The National Emergency Management Agency (NEMA) on Monday accused members of the Shiite Islamic Movement in Nigeria, of burning down two ambulances at the Agency’s Emergency Response and Ambulance Bays (ERABs) in Abuja.

Head of Media and Public Relations of NEMA, Sani Datti, made this known in a statement in Abuja.

“This is to confirm that ERABs of the NEMA located on Ahmadu Bello Way beside the federal secretariat was attacked today with two vehicles burnt down.

”The attack was carried out by members of Islamic Movement of Nigeria commonly known as Shiites.” he said.

Mr Datti explained that the affected vehicles were the Mobile Intensive Care Unit, which was a life support ambulance, and a multi-purpose Response Intervention Van.

According to him, the ERABs were situated at the location for timely response to emergencies and disasters to reduce the loss of lives and property.

He said the Director-General of NEMA, Mustapha Maihaja, had while inspecting the damage, noted that the burnt equipment were very expensive and would cost taxpayers a lot of money to replace.

PREMIUM TIMES reported how the protest by the Shiites turned violent in Abuja.

The protesters clashed with security agencies close to the Federal Secretariat in the Nigerian capital.

Monday’s incident comes about two weeks after two Shiites were killed and two police officers injured after a similar protest turned violent at the National Assembly complex in Abuja.

The Shiites are demanding the release of their leader, Ibraheem El-Zakzaky, who has been in detention for alleged murder since December 2015.

On Monday, the Shiites had begun a protest at Nitel junction and were expected to end at the secretariat.

It is not clear at what point the initially peaceful protest turned violent. The Shiites, however, claim they were attacked by the police.

In an interview with PREMIUM TIMES, a member of the IMN, Yahaya Mohammed, said the Shiite members were only having a peaceful protest when military officers attacked them.

“Which clash. There was no clash between us and anybody. It was a peaceful protest. Until these security officers just came and started shooting and attacking us,” Mr Mohammed said.

Since the incident, the Shiites have been sharing images of badly injured members on social media.

NSE indices resume with 40 per cent loss amid profit taking