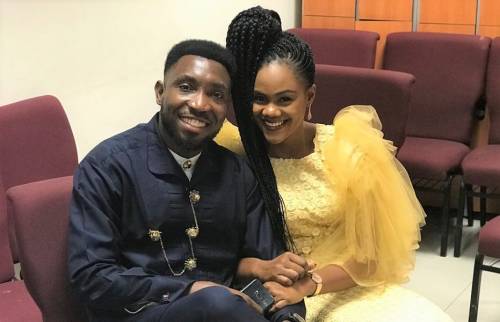 The police were at the Dakolos home today

Popular Nigerian singer, Timi Dakolo, and his wife, Busola, have been invited by the police, weeks after Mrs Dakolo accused popular pastor, Biodun Fatoyinbo, of raping her.

The Dakolos have been asked to report at the Police Command Headquarters in Abuja on Tuesday as part of an “investigation of a criminal conspiracy, falsehood, mischief, and threat to life”.

The singer shared copies of the letter dated July 18 served to himself and his wife on his Instagram handle but has since deleted them. The letters said they are to report at the police station on Wednesday, July 23.

Mrs Dakolo had alleged that Mr Fatoyinbo of the Commonwealth of Zion raped her as a teenager while she attended the church in Ilorin.

It is however unclear if the police invitation was related to Mrs Busola’s sexual assault claims since it was not stated in the letter.

Mr Dakolo had earlier alerted his Instagram followers on Saturday that some police officers forced their way into his Lekki, Lagos home, and attempted to whisk them away.

The singer wrote, “Our lawyers had told us to get ready for this letter. We have long been ready for your intimidation and dirtiness. For your Ilorin methods and underhand tactics. A pastor? Bribing investigating officials to delay summons? Paying dirty bloggers to fabricate things that cover the truth, going to the IG’s people under dark to force this case to be posted to Abuja? Rubbishing the legal and criminal system?

“And sending a bus load of armed policemen and shady men lying in waiting to intimidate my wife and children today, forcing their way into my home. Is that how the real police deliver a letter? This is the best you can do?

“If it’s a fight you want, it’s a war you will get…your filthiness under the guise of Christianity I will expose. Every single thing. I will fight for my wife and my children.

“It’s the promise I made with my life and I intend to keep. I will defend them from the unrelenting attack of a weak man who thinks he can use money and power to cover for all of his crimes. Like I said, we have since been ready. Give us the fire then watch me work.

Mrs Dakolo has gone off Instagram since June 27 and has maintained a low profile ever since.

Mr Fatoyinbo was accused of rape by Busola Dakolo in a video interview posted online by the channel, YNaija, in June. The video prompted calls for Mr Fatoyinbo’s prosecution.

Mrs Dakolo is not the first person to accuse Mr Fatoyinbo of sexual assault. Six years ago, the cleric faced allegations of sexual abuse from two women, including Ese Walters.

The interview came after Mrs Dakolo’s husband, Timi, called out the pastor over his alleged sexual relationship with female church members.

The preacher denied the allegations, saying in an official church statement that he had never raped a woman “even as an unbeliever.”

He threatened a lawsuit against Mrs Dakolo and others he accused of defaming his character, saying many of the sexual misconduct claims he had faced over the years had come from scorned women within his ministry.

Mr Fatoyinbo eventually succumbed to pressure to step down from the pulpit in the heat of the allegations.

He announced that he would be “taking a leave of absence from the pulpit of the church” on July 1.