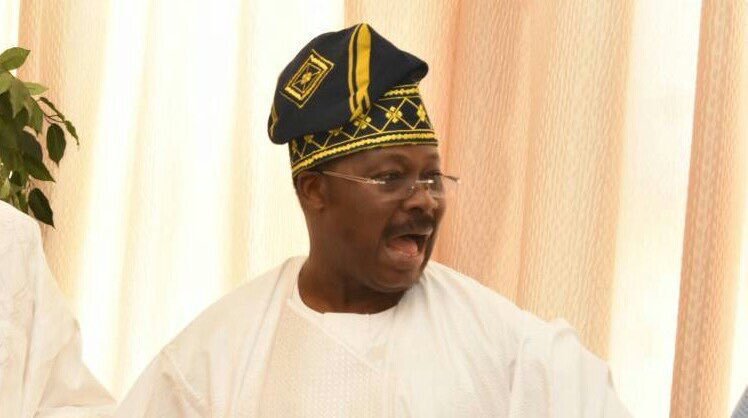 EXCLUSIVE: How Ajimobi awarded self, wife, others N1bn worth of state’s cars using ‘discretionary powers’

Facts have emerged how the immediate past Oyo State Governor, Abiola Ajimobi, used “discretionary powers” to award cars worth over N1billion as exit package to himself, his deputy, the Secretary to the State Government and other principal officers of his government.

PREMIUM TIMES gathered that most of the cars taken away by top officials of the past administration were purchased between January and February this year.

Other cars in the former governor’s fleet, which were taken away, include five Toyota Land Cruiser SUVs; a Toyota Prado SUV; An LX Lexus jeep and a Nissan Pathfinder SUV.

The Deputy Governor went away with a Toyota Land Cruiser and three Toyota Hilux D/C Pick Up.

The Secretary to the State Government, Ishmael Alli, went away with a brand new Toyota Land Cruiser and a Prado SUV 2018 model.

PREMIUM TIMES investigation revealed that the Oyo State government procured the SSG’s cars for N40million each. The OYSG 1 is a treated car worth N140 million. The value of the other vehicles such as the Toyota Hilux and the Land Cruiser SUVs is about N30million each.

In a letter dated May 4, 2019, Mr Alli, as the SSG, wrote a letter to Mr Ajimobi, a copy of which was obtained by PREMIUM TIMES, requesting that the principal officers be allowed to go home with their official vehicles as an exit package.

Mr Alli cited certain legislations, including the 1999 Constitution (as amended) to back up his request, suggesting that the governor could by law, use his discretionary powers to approve his request.

He also cited the tradition of state governments in the south-west which allows state principal officers to allow the cars in their fleet to be taken away at the expiration of their tenure.

“Further to my earlier submission at page 1-2 with attachments from pages 3-14 to your Excellency on the above subject and the imminent end of the tenure of the administration, I like to state as follows:

“Federal Republic of Nigeria 1999 Constitution(as amended)makes provision for the pension of gratuity of governor and deputy governors who are not removed from office as a result of impeachment.

“On the policy of the disposal of vehicles to government functionaries and others, His Excellency, the governor can exercise discretionary powers to approve the first right of purchase of their official vehicles and equipment on the expiration of their tenures or otherwise, at the depreciation values that may be determined by the board of survey or based on the exercise of discretionary powers of the governor(page 11 of file).

“Based on the above, I am recommending for your Excellency’s consideration and approval that the governor, the deputy governor and any other principal/political appointee be considered as deserving of such an exit package free of charge as may be approved by your Excellency.

“Your Excellency is graciously requested to consider the above for further directives and necessary actions, sir.”

The memo was promptly approved by the then governor “as recommended.”

Mr Ajimobi also approved the request of the Chairman of the State Universal Basic Education Board, A. O. Makanjuola, in a letter dated April 18, for her to take away her official vehicle as an exit package.

Mrs Makanjuola wrote: “This is to express my deepest gratitude for the opportunity to serve the state via my appointment under your leadership, as the Chairman of SUBEB.

“May I humbly request your approval for the allocation as an exit privilege, of my official car – Toyota Highlander – 2014 Model, Reg No. 06D14OY, Chassis No. 5TDBKRFH7 S025504 and engine No. 2GRE632241X, Colour Blue, free of charge in line with the exercise of your Excellency discretionary power on the request.”

PREMIUM TIMES has been reliably informed of a policy of the state government that gives political office holders the right of first refusal to purchase vehicles within their fleet, for which they would be required to pay up to about 30 per cent of the value of the vehicles.

But Mr Ajimobi, even though the laws cited by his SSG also noted that he had the powers to decide the value of the cars and what the users could pay, chose to give them out free of charge, of which he was the greatest beneficiary.

The cars were taken away as exit package in spite of the extraordinarily lavish severance allowances available to former governors, deputies and other political office holders.

The Oyo State Pension Law 2004 provides that a former governor and his deputy are to collect a pension as long as they live.

The law stipulates that the pension for life will be paid at a rate equivalent to the annual salary of the incumbent governor or deputy governor of the state.

Oyo State’s new governor, Seyi Makinde, on assuming office, had directed that the cars taken away to be returned to the state government. His ultimatum to the former governor and his aides is yet to receive any attention, as no vehicle has been returned to the government, PREMIUM TIMES learned.

In responding to the allegations that he and his aides took away cars belonging to the state government, Mr Ajimobi said Mr Makinde should focus on governance and not look at “mundane issues.”

“I heard them say that members of our cabinet carted away government cars. We have served and left. He should stop looking at mundane issues,” he said.

Justifying further the action of Mr Ajimobi, the man who served as his Special Adviser on Communication and Strategy, Tunji Bolaji, told PREMIUM TIMES that the issue of cars given to principal officers of the last administration had been laid to rest given the fact that the action of the governor followed due process.

“Everything was legally done. All due process was followed. If anybody went away with his official vehicle, he did so in line with due process,” Mr Bolaji said.

“Don’t forget that we are talking about a governor, who has the power to take such decisions.”