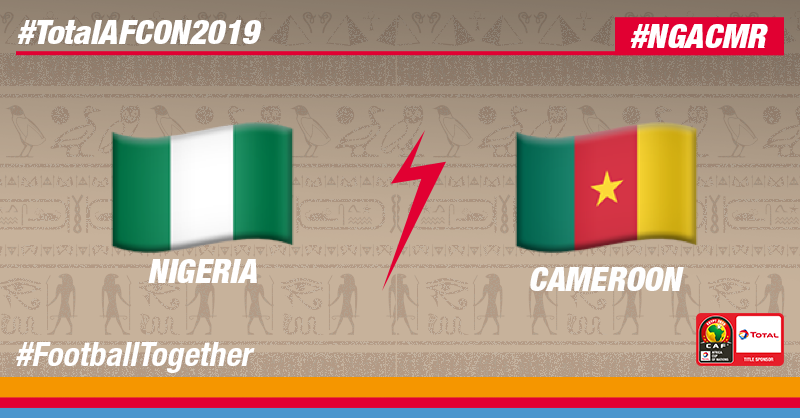 The Super Eagles of Nigeria and Cameroon’s Indomitable Lions are set to slug it out in what has been dubbed the star Round of 16 fixture at the ongoing Africa Cup of Nations.

For many, this tasty clash is coming earlier than expected, but that said a fierce contest is expected as Nigeria and Cameroon engage themselves in another supremacy battle this Saturday.

After failing to pick the number one spots in their respective groups, these eternal rivals now have for themselves a tortuous route as they look to add to their Afcon titles.

While Nigeria boasts of three Afcon titles, Cameroon are looking to double that tally as they are hunting for a sixth African title in Egypt.

With captain Mikel injured and certain to be on the bench, the burden of leadership is on Ahmed Musa’s shoulders.

Even the experienced Odion Ighalo must all be at their very best to keep their maiden AFCON hopes alive.

We are underway.. Kick off

The game has started on a high tempo

A chance for Cameroon.. Ola Aina with a crucial clearance

Nigeria with another chance.. Goes away for a corner kick

Goal!! Super Eagles with the lead

Odion Igahlo with the goal for Nigeria

Ola Aina tries a low shot.. Onana with a save

Free kick awarded to Cameroon.. Though no foul seen

Free kick for Cameroon but Ndidi heads ball out

Goal.. Cameroon get the equaliser

Bahoken taps in the ball.. Samuel Eto’o in the stands celebrates the Cameroon goal

We are back for the second half.. Cameroon get the game underway

Moses Simon with a shot.. But it is way off target

Cameroon’s Mandiek gets the first yellow card of this game

Ola Aina tries a shot.. its off target

Corner kick for Nigeria but cleared by the Cameroon defense

Anguisa in for Mandiek as Cameroon also make their own substitution

Another goal.. ALEX IWOBI MAKES IT 3-2

Toko in for Njie.. Cameroon make another substitution

The Cameroon goal keeper Onana rushes out to save his team

Omeruo wins a free kick inside the box for Nigeria

Almost.. Chukwueze has really changed the game for Nigeria

Onuachu comes in for Odion Ighalo

Another substitution.. Zoa comes in for his first Afcon game as he replaces Kunde

Leon Balogun is coming in for Alex Iwobi