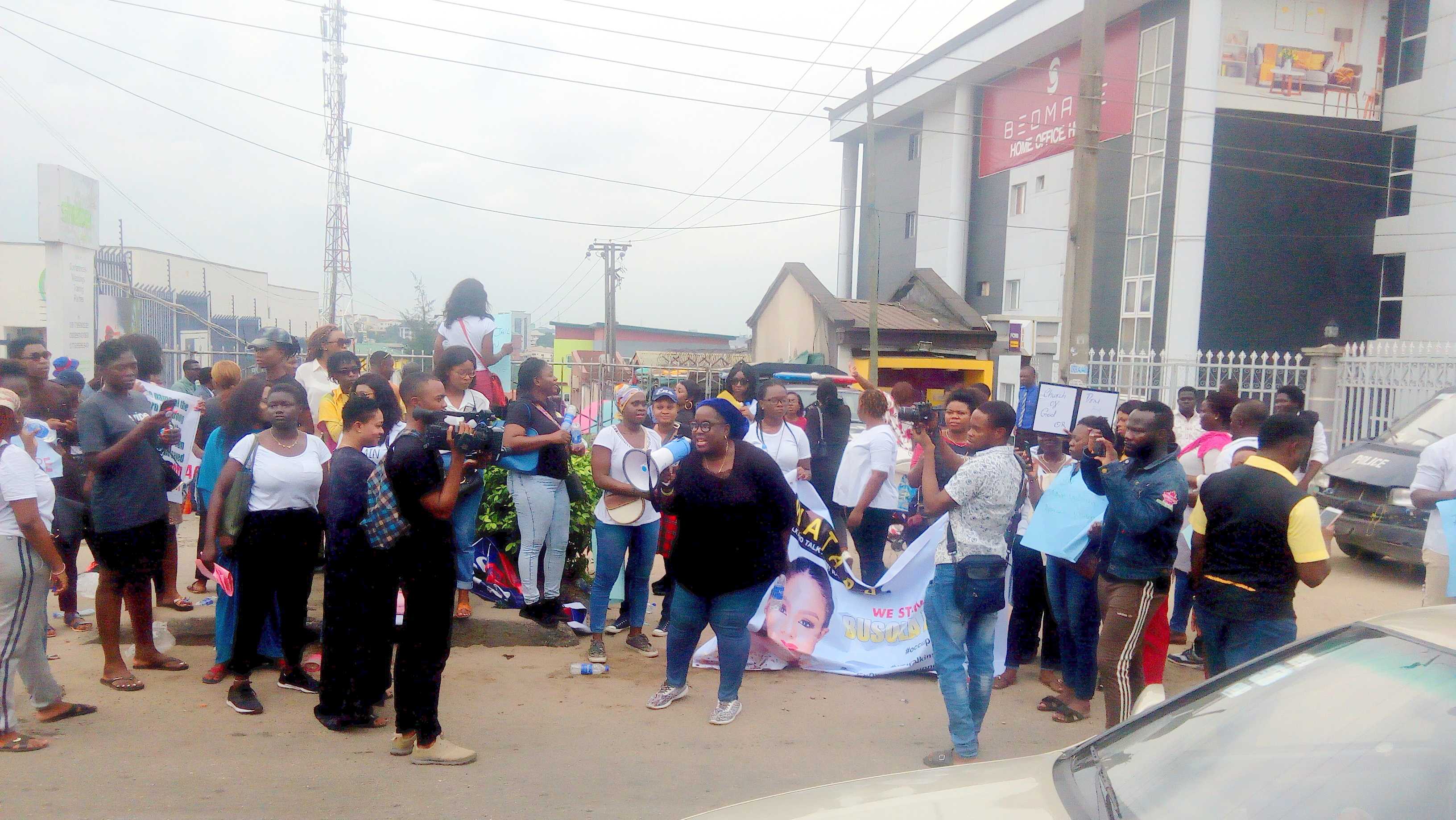 It was an unusual Sunday morning at the Maryland, Lagos branch of the Commonwealth of Zion Assembly (COZA) as protesters took over the access road leading to the church.

Despite the protest, however, thousands of churchgoers attended the service, like others did in Abuja.

The Lagos protesters who were clad in white t-shirts convened at the popular Opic Plaza, carrying placards with various inscriptions.

They called for the arrest and prosecution of the embattled leader of COZA, Biodun Fatoyinbo.

The protest commenced as early as 8 a.m. and continued till the service ended at about 11 a.m.

Protesters of all ages gathered in front of the church premise chanting “rape is a crime”, “rapist not pastor”, “Jesus did not rape”, “Pastor BIODUN, own up”, among others.

Security officers were present obstructing the protesters from gaining access to the church and disrupting the service.

The church entrance was also manned by protocol officers who are members of the church. They screened faces of everyone who tried to enter the church premises and quized unfamiliar faces. PREMIUM TIMES observed that first time worshippers were denied entry into the church.

When our correspondent approached the entrance as a Sunday worshiper, a lady searched her bag while another man asked, “are you for the service or the protest?.”

As our correspondent made to enter the church hall, the lady at the gate ran after her and asked that she be cleared by another protocol officer.

This was after she suspected that she was not a member as claimed.

“Let her go in” , another protocol member said, thereby preventing our correspondent from being handed over to the officer.

The service went on normally, the hall was filled to the brim and in no time the Lagos church hooked up with the televised service in the Abuja headquarters in real time.

The congregation gave a range of joyful expressions when Mr Fatoyinbo manned the pulpit.

He thanked his congregation and stated that he is indeed blessed to have such a congregation.

He also announced the suspension of “Seven Days of Glory,” a yearly programme of the church, stating the “Holy Spirit” and his mentors directed him to do so.

“Apart from the fact that the Lord spoke to me about that, my mentors said this is what we need to do,” he said.

He added that he did npt want to put the guest preachers through the stress of coming to COZA amid such allegations of rape.
.
The pastor said he was unhappy about the scandal rocking his church.

He urged members to uphold what COZA stands for and discouraged them from fighting the protesters on their way out.

He also appealed to those in the church to be law-abiding and peaceful to avoid being handled roughly by security officers.

Omodele Fatoyinbo, the pastor’s wife, also said that her husband is not a rapist.

In her sermon, she said “My husband is not a rapist. Even if he was an unbeliever, he would not be a rapist.”

Her husband, however, took the microphone from her before she could finish her speech, and said, “the elders are handling the matter.”

Mr Fatoyinbo has been under pressure since Friday when Busola Dakolo accused him of raping her.

Although he denied the allegation, the pastor has been widely criticised, with some Nigerians on Twitter asking him to step down.
.
The service was presided by Mr Fatoyinbo, the lead pastor of COZA.

After the church programme ended, the protesters continued chanting “your pastor is a rapist”, “shame on you” as the church attendees left the scene.

A closing prayer for the protesters, led by Funke Adewunmi, was held at 12:29 p.m. after which they dispersed.

Ms Adewunmi said the essence of the protest is to seek justice.

She said the protest will continue next Sunday by 8 a.m. as long as Mr Fatoyinbo remains the senior pastor of COZA.