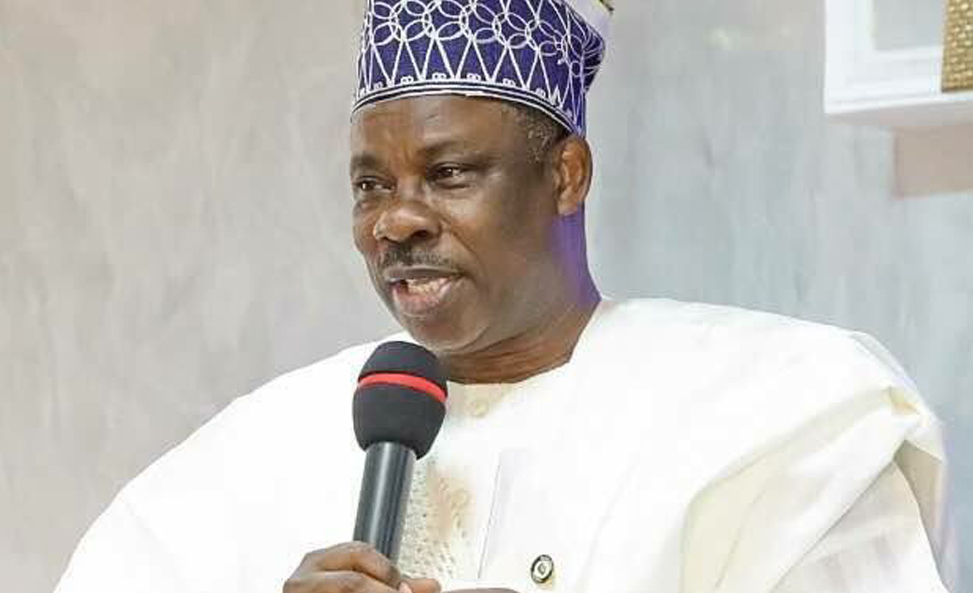 State governments across Nigeria have pushed back against claims by one of their former colleagues that they maintain armouries inside their respective official residences.

Ibikunle Amosun, a former governor of Ogun State, made the disturbing allegation on Tuesday night as he struggled to extricate himself from a PREMIUM TIMES story about how he stockpiled arms and ammunition in an illegal armoury at the Ogun State Government House, Abeokuta — in what is a clear violation of Nigeria’s Firearms Act.

PREMIUM TIMES had reported on Monday night that Mr Amosun stockpiled arms, ammunition and other security equipment for a long period at his official residence when he was governor. The politician, now a senator, called the police commissioner, Bashir Makama, and hurriedly handed over the weapons to him a day before he left office on May 28.

National security officials had found Mr Amosun’s action particularly troubling and illegal, expressing further dismay that the country’s security architecture failed to detect such illegal storage of arms and ammunition for such a long time.

In his defence Tuesday night, Mr Amosun denied keeping the AK47 in his residence but admitted he had the ammunition and armoured personnel carrier in his possession until his last day in office and seven years after he supposedly procured them for the police.

Still, the Firearms Act and other extant firearms regulations absolutely prohibit possession of the type of bullets and armoured personnel carrier — all categorised as controlled equipment — that Mr Amosun admitted handing over to Mr Makama on his last day in office.

The governor also tried to downplay his assault on the country’s firearms law with a claim that illegal storage of arms and ammunition was common among ‘most Government Lodges’ across the country. He said most of his colleagues maintained armouries.

Between Wednesday and Thursday, PREMIUM TIMES reached out to 20 state governments across the country to get their position on Mr Amosun’s claim that they maintain armouries, and all their spokespersons were incensed by the allegation.

Across the Southwest, governments of Ondo, Osun, Lagos, Oyo, Ekiti and Ogun were unanimous in their rejection of Mr Amosun’s claim that governors operate armouries as part of their executive functions.

“We do not have such a thing in Ondo State Government House,” Yemi Olowolabi, the commissioner for information, told PREMIUM TIMES. “Given the kind of governor we have, we do not need an armoury and we are not buying arms for anybody.”

“We do not have any armoury and housing it for such a large cache of arms,” Yinka Oyebode, the chief press secretary to Governor Kayode Fayemi, said.

“We are not fighting a war. Security operatives get their arms and ammunition from the police command,” Mr Oyebode added.

The Oyo State Government said it did not need to keep any guns for whatever reason.

“I can tell you that the Oyo State Government does not have a single gun not to talk of an armoury,” Taiwo Adisa, the chief press secretary to Governor Seyi Makinde, told PREMIUM TIMES.

“Whatever Governor Makinde does regarding security, he calls the security agencies concerned.

“The police and other security agencies are paid to provide the needed security for the state, and the governor consults with the security chiefs, including regular meetings with them on matters of security in the state,” Mr Adisa added.

Asked if there were any indications if former Governor Abiola Ajimobi kept an armoury, Mr Adisa said he would not know as no trace of such was found when the new government took over.

Osun State also said it was not in the practice of keeping arms within the precinct of the Government House.

Niyi Adesina, the chief press secretary to Governor Gboyega Oyetola, said the keeping of arms for any reasons is unknown to him.

Kunle Somorin, the chief press secretary to Governor Dapo Abiodun, said the new administration has no business with the claim of Mr Amosun, and distanced his principal from any claim of arms storage at Government House.

“I know that Governor Sanwo-Olu does not handle arms and does not operate an armoury in Government House,” spokesperson Gboyega Akosile told PREMIUM TIMES. “He does not do more than what is constitutionally-required of him as a governor.”

Spokespersons for South-South governors also shunned any links to the storage of arms.

Ekerete Udoh, a spokesperson for Governor Udom Emmanuel of Akwa Ibom, said: “I think this is about the most insanely ridiculous question to ask: How can the seat of government of one of the most peaceful, safe and secure states in the nation have an armoury? To do what with it?

“I suggest you direct your inquiry to the relevant agencies of the federal government who are legally tasked and mandated to stockpile arms and secure them in armouries,” he added.

“It is inconceivable for a governor of a state to have an armoury in Government House,” Mr Soriwei said, adding that doing such a thing would constitute a threat to national security.

Governor Patrick Okowa also said he does not keep an armoury in his official residence in Asaba.

“What business do governors have with armouries?” Ehiedu Aniagwu, the governor’s spokesperson, said.

“Normally, we have policemen and officials of other security agencies deployed to the Government House, and where they keep their weapons is none of our business.

“How can the governor have control over armoury? Government House, Asaba, is for the purpose of running the government, it is up to the police commissioner in the state to direct how policemen carry arms.

“How can the governor be busy thinking about where they keep arms? That is not part of his job,” Mr Aniagwu added.

Governor Godwin Obaseki also said that the Government House Benin City does not harbour an armoury.

“We have what we called quarter guard which is in every government house in Nigeria, we have policemen, we have the SSS, and some of them are resident there and they have control over their weapons.

“The police and the SSS are under the control of the federal government. The governor absolutely does not have control over where they keep their weapons,” Crusoe Osagie, Mr Obaseki’s spokesperson, said.

“No, we do not have any armoury in Government House, Calabar, we only have security personnel who are armed by the police,” Christian Ita, Cross River Governor Ben Ayade’s spokesperson, told PREMIUM TIMES Thursday morning.

The Kogi State Government also said it is “not responsible for arms procurement for the security agencies in the state.”

“But as the government who puts the security of life and property of all the citizens and residents of the state at the top of his agenda, we give assistance in the donation of patrol vehicles and motorcycles to the security operatives in the state to enhance their operations,” Mohammed Onogwu, Governor Yahaya Bello’s spokesperson, told PREMIUM TIMES.

Ebonyi State Governor David Umahi also said there was no reason for him to maintain an armoury in Government House.

“We do not have any reason to have an armoury as a state which is under the protection of a constitutionally empowered security outfit,” Emmanuel Uzor, a spokesperson for the governor, said. “There is no need to stockpile arms in the Government House under the direct supervision of the governor who is not a security man.”

“Only the security personnel attached to the Government House keep arms for their operational convenience,” the spokesperson added. “Ägain, we do not have an armoury under the direct supervision of the governor.”

In the North-East, spokespersons for Borno and Yobe, which have been under heightened security arrangement due to Boko Haram, said Mr Amosun’s claim that there are armouries in Government Houses was not even worth dignifying with a response.

The Special Adviser, Media and Communication, to the Kaduna State’s Governor Nasir El-Rufai told PREMIUM TIMES, “We don’t have an armoury in Government House. Anything procured by the state to assist security agencies are usually handed over to the agencies who are the end users. We usually donate patrol vans, motorcycles and vests to them. But we usually hand it over to them. So we don’t need an armoury.”

Salihu Tanko-Yakassai, who served as the chief press secretary to Governor Umar Ganduje, said Kano State Government House does not have an armoury.

The Rivers State Government under Governor Nyesom Wike also does not keep weapons at the official lodge, according to Oraye Franklyn, who until recently was a spokesperson for Mr Wike.

Ibrahim Dosara, who served as the chief press secretary to former Governor Abdulaziz Yari, said Zamfara Government House in Gusau did not have an armoury.

Mr Dosara said Mr Yari even placed a bounty of N1 million on anyone found with an AK47 rifle, the kind of weapons Mr Amosun stockpiled.

“At least three residents of the state were paid N1 million each for blowing the whistle on people who had AK47,” Mr Dosara said. “So it is impossible for the governor to keep an armoury.”

The Benue State Government also said Governor Samuel Ortom does not keep an armoury at the Government House, Makurdi, and he relies on conventional security agencies for his protection.

“The governor is guarded by the conventional security agencies, including the police, State Security Service and Civil Defence,” Terver Akase, a spokesperson to the governor, said. “That is all.”

“The governor does not believe in militia and does not use arms,” Mr Akase added. “He even recovered illegal arms from people and destroyed them in accordance with the United Nation’s guidelines.”

Yakubu Datti, the immediate past commissioner for information in Plateau State, said Governor Simon Lalong does not maintain any armoury at the Government House, Jos.

“There is nothing like that.” Mr Datti said in response to a question on whether Mr Lalong stores arms in his official lodge.