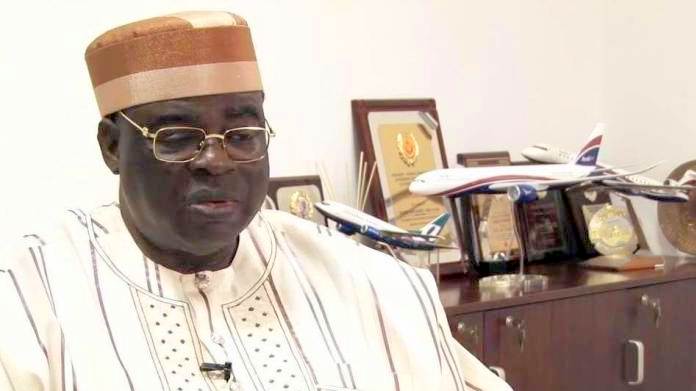 EXCLUSIVE: Inside the stupendous wealth of Arik Air founder, Arumemi-Ikhide

While his beleaguered airline was accumulating over a hundred billion naira in debt, compelling a government takeover with taxpayers’ money, the founder of Arik Air, Joseph Arumemi-Ikhide, sat on vast wealth in real estate, company stocks and other properties stashed around the world, a PREMIUM TIMES’ investigation has revealed.

Belaboured by increasing debts including N135 billion owed to the Asset Management Corporation of Nigeria (AMCON), the Nigerian government in February 2017 stepped in, sacked the airline management, and appointed a new one for a carrier that prides itself as the country’s largest commercial airline.

Less than two months after the government-appointed management took charge, it revealed that the airline was in a worse financial situation than previously thought.

Arik also violated Section 4 of the Pension Reform Act 2014 by failing to remit funds deducted from its employees’ salaries plus its own 10 per cent contribution to their retirement saving accounts, he said.

Multiple sources who worked at the airline said the former management did not remit their pension contribution to their Pension Fund Administrator (PFA) up to at least 65 months between 2010 and 2016. According to the airline’s appointed receiver, its unpaid pension obligation was N4.59 billion.

Mr Opasanya told the court that the company was shabbily run by its previous management.

“Arik was in a precarious situation largely attributable to its heavy financial debt burden, bad corporate governance, erratic operational challenges and other issues,” he said.

Mr Arumemi-Ikhide is challenging the government takeover of the company in court.

But while his company was being run into billions of debts, Mr Arumemi-Ikhide was amassing multi-million-dollar assets around the world, his financial records obtained by PREMIUM TIMES have revealed.

The records of Mr. Arumemi-Ikhide’s assets seen by this newspaper were last updated in 2014, three years before his airline was taken over by AMCON. We cannot confirm if he has amassed more wealth or has lost some since then.

His United Kingdom property portfolio, which included Ojemai Properties, Overbury Properties and his other personal properties were valued at $44 million as at July 2013.

In May 2013, according to an estimation done by the audit firm, Deliotte, Arik Air was value at $1.04 billion.

His other aviation companies – JEM Air Limited and JM Air Limited – were valued at $20million and $6 million respectively in June 2014.

While his total assets was valued at $3 billion, the total liability accrued by the above portfolio was $514.8 million.

One of the documents obtained by PREMIUM TIMES also revealed that Mr Arumemi-Ikhide owned an array of expensive properties across the UK. While some of the properties were jointly owned by him and his wife, he personally owned some and the rest were owned by two of his companies, Overbury properties Ltd and Ojemaie Properties Ltd.

A document seen by PREMIUM TIMES revealed that he and his wife jointly owned properties valued at £18.97million as at August 2014.

However, while the couple have paid off the mortgage on the first three properties, there was still an outstanding mortgage of £3.96 million on the property at St Mary’s Place.

The monthly rent accrued to Mr Arumemi-Ikhide from the properties was £39,495.

Between 2011 and 2013 when his airline was perhaps in its tightest financial strait – a period of mounting debt bills, and its inability to meet the pension obligation of its employees, one of the documents in our possession revealed that Mr Arumemi-Ikhide earned at least $26.54 million.

According to the letter dated July 23, 2014, sent to Oliver Mayes of Thomas Edggar LLP, a London law firm adept in offshore deals in tax havens, in respect of an undisclosed transaction, the income did not include “fees, allowances and bonuses from various companies where (Mr Arumeni-Ikhide) serves as Chairman and Director.”

Another document revealed that the Arik founder was a top investor in the country’s banking sector with the cumulative value of his share estimated to be in the ballpark of N8.36 billion ($51.6 million) as at October 2014.

Though he owned 333,000,000 units of share in Keystone Bank, the value of the shares was not given as the Bank had been taken over by the government and he was challenging the takeover in court.

Mr Arumeni-Ikhide did not respond to requests sent to his email address and phone number for comment.