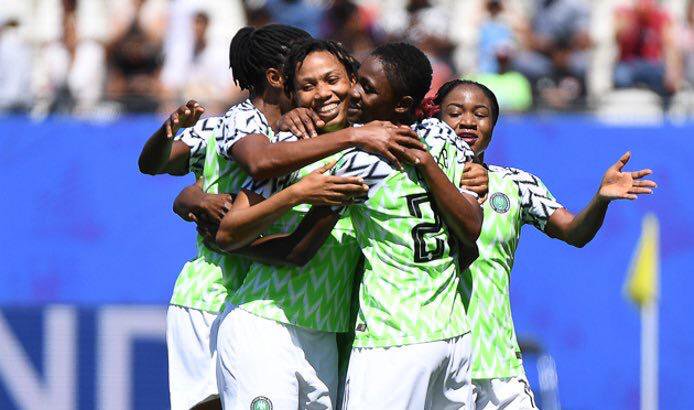 The Nigeria women team are desperate to avoid an early exit from the ongoing FIFA Women’s World Cup.

In the last 20 years, the Super Falcons have not made it beyond the group stage. But they hope to stop that trend as they face the host team, France, in their last group game tonight.

The 28,000 –capacity Roazhon Park in Rennes is the venue for Monday’s big FIFA Women’s World Cup clash between Nigeria and France.

Group leaders Les Bleues have already qualified for the knockout rounds. But the Super Falcons must avoid defeat tonight to be sure of their berth in the Round of 16.

While the last meeting between France and Nigeria in an international friendly ended in an 8-0 humiliation for the Super Falcons, the girls have assured of a better performance in tonight’s crunch clash.

Oparanozie nods the ball but France keeper makes a save

So many attack minded players in both teams

Norway has already taken the lead against South Korea

Good movements by the French Ladies so far

Free kick for France as Ebere orji commits a foul

No clear shot on target for both teams so far

France bossing the game with 70% of the ball possession

Ebere Orji gets the first yellow card of the game

Free kick for France but it goes out of play

As at the 27th minute, Nigeria’s passing accuracy has been 51%. They keep giving the ball away.

Oshoala struggles and wins a throw in for Nigeria

Nigeria give the ball away again .. They have done that more than 47 times tonight

France corner kick cleared and Falcons with a quick break

Huge scare for Nigeria but France blow away another chance

Bilbaily and Chikwelu clatter into each other and game momentarily halted

Both players back on as the game is back on

Despite the overwhelming dominant display..the French Ladies had no shot on target

We are back for the second half.. The Super Falcons get the game underway

Free kick for France no hassles for Super Falcons

Another nervy moment for Nigeria

Double sub .. Gauvin in for Casperino.. Diani also in for France

Still 0-0 and looking good for Nigeria

Halimatu Ayinde with a shot but off target

Onome Ebi with a painful block for Nigeria again

A free header for the French Lady but goes over

Game stopped with another injury scare and referee consults the var

Penalty kick to be retaken .. The Nigeria goalkeeper left her line before the kick

And she scores this time

France looking to double their lead

France clear off the ball

IFC, AMC to sell 14.1 per cent stake in Ecobank Transnational