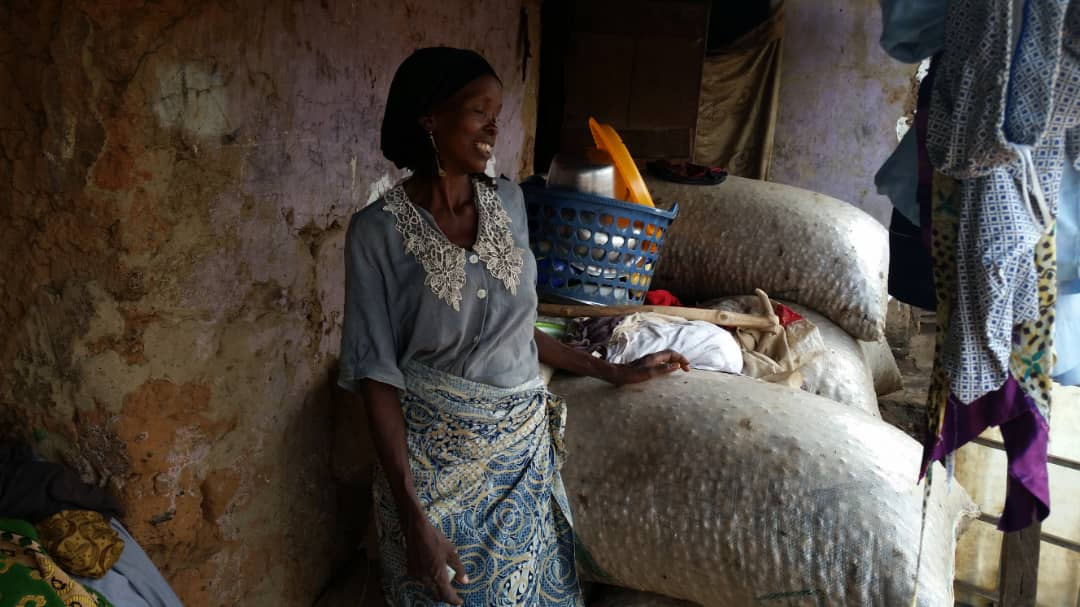 Boko Haram: Displaced women turn to cashew in Abuja, and are ‘making it’

“This business brings lots of profit for me,” Hauwa Mohammed said.

The 30-year-old mother of three lives in Damagaza, one of the unofficial camps in Abuja for persons displaced by the Boko Haram crisis. She has been trading in cashew nuts for over three years.

“I used the profit that I made in the business last year to roof the house I am building.”

Mrs Mohammed said the business had also enabled her to cater for her children. Her husband works as a security guard, does not earn much from the job and is not always at home.

According to Mrs Mohammed, the Gbagyi people planted cashew on their ancestral land in the Federal Capital Territory to protect it from being taken away from them by a “predatory clan” made up of the Nigerian government, land grabbers and estate developers.

Some women in the IDP camps soon found gold rummaging the plantation. They pick the cashew nuts and sell to itinerant commodity buyers.

The cashew seed is more popular than the cashew apple itself. It is widely consumed as a snack in Nigeria.

The nuts can also be pressed to release edible cooking oil, which is considered healthier than most other types of cooking oil.

But despite being considered healthy, cashew oil is not in common use because of its cost. The high cost is due to the long process of extraction of the oil.

After being removed from the bottom of the fruit, the nuts are roasted or dried in an oven for easy removal from the shell. In Nigeria, all these are mostly done by hand.

To extract cashew oil, the shells and skins are first removed. The oil in the cashew shells is very toxic and can damage the human skin. Workers cover their hands with ashes to absorb this oil while working on the shells.

The shells are then usually cracked with a mallet, and the cashew nuts removed. Some mechanical devices may also be used to cut the shell off the nut.

But the trade around cashew in Nigeria is not really about the cashew nut or the cooking oil extracted from it. The toxic liquid from the cashew nut shell, also known as the Cashew Nut Shell Liquid (CNSL), is the main target of the business.

The demand for the reddish-brown viscous liquid is quite huge in Nigeria as it is considered a better and cheaper material for unsaturated phenols and because of its multiple uses.

Women in the Business

Amina Mohammed, the wife of the chairman of the Danmagaza IDP camp is one of the major traders in cashew nuts in the camp.

The 43-year-old mother of 10 recalled wistfully the boom she said the trade enjoyed last year. She was able to buy a grinding machine and start processing corns from her profits. She said she also took over from her husband the payment of the school fees of one of their children.

Amina, who is also pregnant, said she bought her grinding machine for N40,000 last year and makes about N2,000 daily from it, aside from her regular canteen customers who pay weekly.

She said the cashew business started fully in the Danmagaza camp two years ago when some people came from Lagos to buy the nuts.

“Plenty people from Lagos came to buy from us. Last year, we sold one module for N700,” she said.

But the bubble has since ruptured. This year, Amina said a module has been selling for only N100.

Hanatu Sadiq, 26, is a squatter in an unofficial IDP camp in Malaysia Garden, located in Kabusa area of Abuja.

The widowed mother of three said she was easily attracted to the business because “it is lucrative and doesn’t involve much stress.

“The market really brought profit for me last year. I started my provision business from the gains.”

They believe foreigners coming to buy the nuts have been scared to stay away by the political atmosphere of Nigeria because of the elections.

Amina’s husband, Umar Mohammed, lost one of his legs during an attack by Boko Haram insurgents in Borno State. He has also felt the impact of the lull in business.

“My prayer is for those foreigners to come because Nigeria doesn’t have a processing factory for cashew oil unlike groundnut oil, soya oil and some other oil produced in Nigeria,” Mr Mohammed told PREMIUM TIMES.

But the experience is not peculiar to the women cashew traders in Abuja. Across the cashew belt in Nigeria, farmers and traders have been severely hit by the fall in the price of the commodity.

The fall, however, is not unusual as it reflects the situation at the international commodity market. For commodities such as cashew nuts, cocoa, cotton and palm kernel, fluctuation is in the nature of the business.

Guru Maharaji to Buhari: Appoint me special adviser to oversee petroleum, other ministries