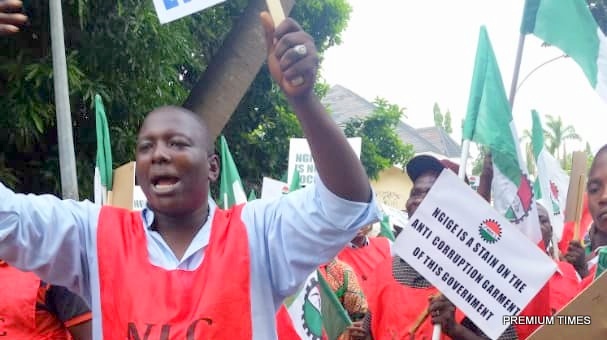 Hoodlums who support the Minister of Labour and Employment, Chris Ngige,

The incident occurred during a protest rally by the Nigeria Labour Congress (NLC) over the delay in the inauguration of the board of an agency.

The thugs clashed with the protesters who were chanting slogans at the front of the residence of the minister in Asokoro area of Abuja. The NLC members had barricaded the street with two petrol tankers at two points around the minister’s residence.

Ms Adegboyega, who was covering the protest for this newspaper, was accosted by the thugs who had spotted her recording the event.

The journalist had taken photographs and videos of the clash between the political thugs and NLC members.

According to the reporter, the clash between the thugs and the protesters lasted for over an hour. Although there were police officers at the scene, none of them intervened to resolve the crisis.

The thugs then descended on Ms Adegboyega, with stones and bottles as their missiles, forcing the journalist to flee the scene.

Recounting her ordeals, Ms Adegboyega said three of the thugs soon caught up with her and seized all the valuables they found on her.

“The thugs were pressing my body. They collected my bag, turned it inside out and emptied it. They picked my two phones, the money in my wallet and other contents,” she said.

Ms Adegboyega said she had to lie that she was in the area for a house-cleaning job before the thugs let her go.

Other labour journalists at the scene said they could recognise two of the thugs to be part of Mr Ngige’s personal security and were always in the Ministry of Labour and Employment.

Ms Adegoyega said a passer-by who had witnessed the assault from a safe distance later gave her N1000 and advised her to go back to her office.

She said the driver of the NLC general secretary, Peter Ozo-Esan, was badly beaten and left lying on the floor.

She said some members of NLC were badly beaten and seriously injured.

Premium Times had reported the tussle between the NLC and the labour minister over the inauguration of the Nigeria Social Insurance Trust Fund (NSITF) board which was constituted by Vice-President Yemi Osinbajo in October 2017 in his capacity as Acting President.

Since 2017, Mr Ngige has refused to inaugurate the 11-member board thus rendering the agency powerless.

However, when contacted in January, Mr Ngige said the failure of labour representatives to show up for screening was delaying the inauguration, a statement Mr Wabba had described as falsehood.

When he decided to inaugurate the board, Mr Ngige left out the name of Frank Kokori, a former labour leader, who had been named the chairman of the board by Mr Osinbajo.

NLC, however, insists Mr Kokori must be inaugurated as the chairman of the board.