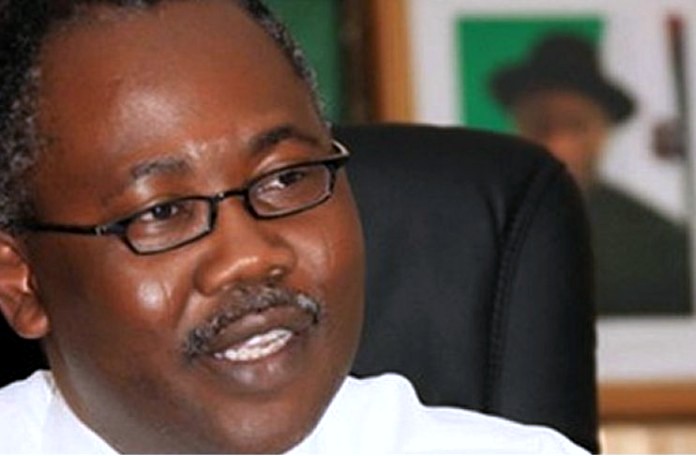 A former Minister of Justice and Attorney General of the Federation, Mohammed Adoke, has asked a Federal Capital Territory High Court in Jabi, to vacate a bench warrant issued against him.

The court order had followed their alleged failure to turn up for their arraignment in a fraud charge relating to the Malabu Oil scandal.

Ruling on the ex-parte motion filed by the Economic and Financial Crimes Commission (EFCC) on April 17, Justice D. Z. Senchi ordered that the Nigeria police, the INTERPOL and any other law enforcement agency should arrest them anywhere they were found.

However, in a motion on notice filed before the court through his lawyer, Mike Ozekhome and made available to PREMIUM TIMES Tuesday night, Mr Adoke told the court to vacate the order on the grounds that the court lacked the jurisdiction to have granted the order in the first instance.

In the suit marked: FCT/HC/CR/124/17, all the defendants repeatedly failed to appear before the court.

Following their repeated absence in court, the EFCC through its counsel, Aliyu Yusuf, brought a motion praying the court for a warrant of their arrest, and an order for leave to execute the warrant outside of the jurisdiction of the court.

On April 17, according to the EFCC, Judge Senchi granted the prayers of the anti-graft agency, and ruled that the Nigeria Police, the INTERPOL and any other law enforcement agency ”should arrest them anywhere they were found including outside jurisdiction of the Federal Capital Territory, (FCT) High Court”.

Although Mr Etete has not appeared in a Nigerian court, his lawyer has appeared during trials at the Italian court.

The Malabu scandal involved the transfer of about $1.1 billion by oil multinationals, Shell and ENI, through the Nigerian government to accounts controlled by Mr Etete.

From accounts controlled by Mr Etete, about half the money ($520 million) went to the accounts of companies controlled by Abubakar Aliyu, popularly known in Nigeria as the owner of AA oil.

Anti-corruption investigators and activists suspect he fronted for top officials of the Goodluck Jonathan administration as well of officials of Shell and ENI.

The transaction was authorised in 2011 by Mr Jonathan through some of his cabinet ministers, and the money was payment for OPL 245, one of Nigeria’s richest oil blocks.

Last June, PREMIUM TIMES reported how Mr Etete acquired luxury properties in Dubai with funds believed to have been sourced from the controversial deal.

A week before then, the EFCC was urged to seize a private jet owned by Mr Etete.

Four international anti-corruption crusaders appealed in a joint petition for the retrieval and forfeiture of the jet by the Nigerian government.

The crusaders claimed that the private jet owned by Mr Etete was purchased with illicit funds. The jet is said to be worth $56 million as at the time it was purchased.

2019 election petitions across Nigeria increase to 766