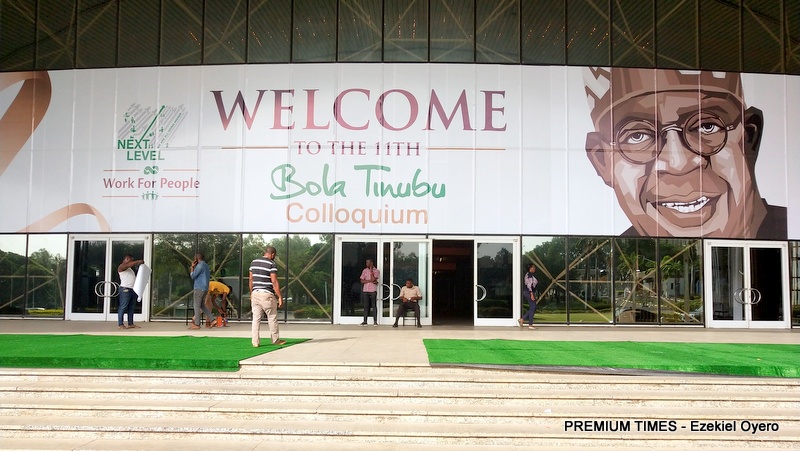 Today, leaders and distinguished individuals across Africa are gathering in Nigeria’s capital for the 11th Bola Tinubu Colloquium.

The Tinubu Colloquium is usually held this day annually to mark the birthday of a leader of the ruling All Progressives Congress (APC) and former governor of Lagos State, Bola Tinubu. The event usually focusses on tackling critical issues affecting the government and people of Nigeria.

President Muhammadu Buhari and other prominent leaders and politicians across the country are expected to attend the event holding at the International Conference Centre in Abuja.

This year’s colloquium which marks the 67th birthday of Mr Tinubu will focus on jobs and the economy.

According to organisers, the objective is to outline and showcase the government’s efforts to add millions of jobs over the next four years through policies and investment in agriculture, industrialization, and technology/creative sector.

“This will also highlight the Next Level initiatives to prepare our people for the jobs of the future through education and skills.”

PREMIUM TIMES will bring you live updates of the event billed to start at 10:00 a.m.

The mood is upbeat at the internal conference centre in Abuja, the venue of the event.

Dancers and drummers whose sounds depict a typical Yoruba culture are currently setting the perfect ambience for the days event as they welcome dignitaries with their rhythmic beats and chants.

Among the guest that have arrived so far are Akinwunmi Ambode, the outgoing governor of Lagos State; Rauf Aregbesola, a former governor of Osun State and Chris Ngige, Minister of Labour.

He thanked those present for coming out to celebrate the ‘don. ‘

Vice President Yemi Osinbajo just arrived. He was welcomed by a host of leaders of Nigeria’s ruling party, APC.

Addressing the audience, Minister of Trade and Investment, Dr Okechukwu Enelamah, shared the government’s new initiative called Made in Nigeria for Export (MINE).

He said the project has set ambitious targets over the next 10 years.

Part of the targets include:

1. Boosting manufacturing share of the GDP to 20 per cent.

3. Generate 30 billion dollars in non-oil sector annually, among others.

He said the projects have already kicked off in three places:

1. Enyimba City, a partnership of the federal government, Abia State and partners. He said the design for first phase is ready.

He said the cluster will aggregate cotton from 800,000 farmers.

The Managing Director of Transmission Company of Nigeria (TCN), U.G Muhammed, shared power sector objectives for the Next Level.

“As at December last year, the capacity of the grids had increased to 8,000 megawatts, generation 7,500 megawatts.”

11:20 am. – Banji Oyelaran-Oyeyinka, the special adviser on industrialization to the African Development Bank (AFDB) is the second speaker called to make a presentation by Ikem Isiagwu, moderator of the event.

Oyelaran-Oyeyinka stresses the need for raising the standard of living of Nigerians through Agriculture.

He says the focus of any good government should be to provide employment opportunities.

“Unemployment lowers efficiency and productivity of a nation”, he says.

He further explains how agro-industrialisation can boost the economy.

He says apart from boost food yields, agro-industrialisation will include making of raw materials and imported goods such as leather, bags and shoes.

He listed some developed countries in the world who invest heavily on agro-industrialisation.

“US, China and the Netherlands make a lot of money from agro-industrialisation. They have moved from small scale farming to industrialised farming.

“By 2030 Agro market will become a trillion dollar market and Nigeria needs to key in. ”

He further explains what the government is proposing in relation to Agro-industrialisation.

He explains how Agro-Zones will be created across the country.

The professor says agro-enhancement zones will be created in the plan which will, directly and indirectly, create jobs through cooperations.

Mr Oyeyinka says the plan will lead to the creation of about 3000 jobs.

He says through the zones, land expansion, partnerships and market proximity will be fortified.

He served at a very high level within the United Nations systems for 20 years. He was the senior economic adviser, UN centre on trade and development in Geneva.

Mr Muhammed said the government is committed to expanding the grid under the Implementation of Transmission Rehabilitation and Expansion (TREP).

He mentioned some of the actions the government has taken to include frequency control and spinning reserve.

“Before now contracts in this sector are done to enrich people, contracts are not done to be completed.

“We have developed a strategy of dealing with such contractors. ”

Part of such strategy is direct labour by TCN staff which he said has saved a lot of money.

He said the TCN has installed more transformers in the last two years than installed in 15 years.

“He’s not an engineer but his vision is what many of us have seen in Lagos today,” Osinbajo says of Tinubu.

He praised him on his reforms in taxation, politics and other spheres.

He speaks on how the topic: Creative Industry as a job spinner.

He listed film, entertainment, music, fashion and lifestyle as the major drivers in the creative industry which has the ability to scale up job creation.

He recalls that it was at a period when Nigeria slipped into a recession that the cinema industry generated such revenues in six zeros.

He says such achievement in the sector deserves a round of applause.

In 2016, Nigeria slipped into its worst economic recession in over a decade, figures from the National Bureau of Statistics (NBS) showed.

The statistics bureau in 2018 restated that the country was out of recession.

“If we are making such money in the creative industry as well as topping the box offices – then we can create more jobs through this sector,” he says

He urges the government to invest more money on the creative industry especially in the cinemas. He says Nigeria produces about 2000 movies annually.

“If we build more cinemas, more jobs will be created.”

He further stresses the need for the government to help in tackling piracy in the creative sector.

Mr Osinbajo recalled how he worked with Mr Tinubu on the legal battles of the Action Congress of Nigeria (ACN).

Hiring 63 thumb print experts, he said they were able to prove that there was over voting due to illegal thumb printing.

In the end, the ACN was able to get some some of the states that were ‘stolen.’

“The only way that was achieved was not only the vision but by a rare leadership.”

He also praised Mr Tinubu for his dynamism in appointment.

“There is no other state, except some states in the north, where we’ve seen appointment of people from other states and Asiwaju pioneered that.”

“Nigeria’s main problem is lack of integrity in leadership and corruption in particular.

“We cannot point to a single major infrastructure project completed after 10 years (referring to years of PDP rule).”

He said infrastructure is critical in the Next Level.

“We are going to expand the Social Investment Program. The program is the biggest anywhere in African.” – Osinbajo.

He said the government is planning to expand the N-power program.

The celebrant, Bola Tinubu, takes the stage to give his own remark. He gives votes to dignitaries present at the event.
He describes the vice president, Mr Osinbajo, as a man of many talents.

He also thanked traditional rulers and elders that graced the event.
Mr Tinubu while congratulating his party, the APC, on their victory in the last election, took shots at the Peoples Democratic Party (PDP).

“I am excited we walloped them (PDP) and won. I will not be happy standing here and celebrating my birthday if we lost so let me congratulate myself too.”

After the vote of thanks, the former Lagos governor speaks on the government’s Next Level plan.

He describes the Next Level as a plan with even a more deeper meaning than the initiators might have anticipated.

He, however, counters the government’s proposed plan on increasing Value Added Tax (VAT). “There should be a question mark on the VAT plan. We should be talking about widening the tax net instead of adding another layer on taxing.”

He further speaks on how the government can increase the capacity of electricity in the country that will attract industrialisation and create more jobs.

He tasks the Buhari-led administration to take responsibility for creating sustainable electricity within the next four years.

“We should manage electricity in such a way that Nigerians are charged accurately for what they consume.

He stresses the need for government to key into agricultural industrialisation and human development in the next level agenda.

Mr Tinubu further decried the level of unemployment in the country at the moment.

About 20.9 million Nigerians became unemployed between 2017 and 2018, data from the National Bureau of Statistics (NBS) shows.

The data revealed that the number of unemployed Nigerians increased by 3.3 million in the past year.

Born 29 March 1952, Mr Tinubu had his first stint in government when he was elected senator for the Lagos West constituency in 1993. The election was just prior to a military take-over in December 1993.

2:10 PM – Colloquium ends with the reciting of the national anthem.