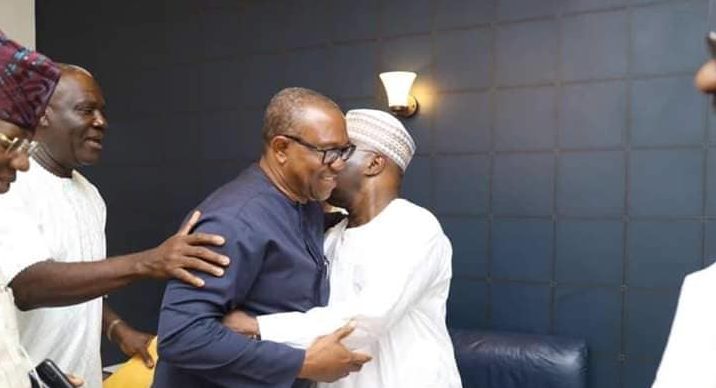 This is contained in the petition filed on Monday by the PDP and Mr Abubakar, to challenge the victory of Mr Buhari and his All Progressives Congress (APC).

The petition, which sought to rely on 50 sets of documents, was filed before the Presidential Election Petitions Tribunal in Abuja against INEC, Mr Buhari and the APC respectively.

But the petitioners stated in their 139-page petition that “from the data in the 1st respondent’s (INEC’s) server…the true, actual and correct results” from “state to state computation” showed that Mr Abubakar polled a total of 18,356,732 votes to defeat Mr Buhari whom they said scored 16,741,430 votes.

According to it, the results were the total votes scored by the candidates in 35 states and the Federal Capital Territory Abuja, as there was “no report on server” about the results from Rivers State as of February 25.

One of the five grounds of the petition also tends to resuscitate the allegation that Mr Buhari was not qualified to run for the office of the president on the grounds that he did not possess the constitutional minimum qualification of a school certificate.

The five grounds of the petition read, “The 2nd respondent (Buhari) was not duly elected by the majority of lawful votes cast at the election.

“The election of the 2nd respondent is invalid by reason of corrupt practices.

“The election of the 2nd Respondent is invalid by reason of non-compliance with the provisions of the Electoral Act, 2010 (as amended).

“The 2nd respondent was at the time of the election not qualified to contest the said election.

“The 2nd respondent submitted to the 1st Respondent an affidavit containing false information of a fundamental nature in aid of his qualification for the said election.”

“The petitioners state that by Section 31 (1) of the Electoral Act, 2010 (as amended), every political party shall not later than 60 days before the date appointed for a general election submit to the Commission in the prescribed form the list of the candidates the party proposes to sponsor at the elections.

“Further, by Section 31(2) of the Electoral Act, 2010 (as amended), the list or information submitted by each candidate shall be accompanied by an affidavit sworn to by the candidate at the Federal High Court, High Court of a State or Federal Capital Territory indicating that he has fulfilled all the constitutional requirements for election into that office.

“The 2nd respondent filled and submitted Form CF001 to the 1st Respondent, which was declared before the Commissioner for Oaths at the Registry of the High Court of the Federal Capital Territory, Abuja on the 8th day of October 2018. The said Form CF001 is accompanied by an ACKNOWLEDGEMENT indicating that the 1st Respondent received same.

“The information submitted to the 1st respondent (INEC) by the 2nd respondent (Buhari) is false and of a fundamental nature in aid of his education qualification, notwithstanding that he had declared in the said sworn affidavit as follows: ‘I hereby declare that all the answers, facts and particulars I have given in this Form, are true and correct and I have to the best of my knowledge, fulfilled all the requirements for qualifications for the office I am seeking to be elected’.”

They stated that the educational institutions Buhari “claimed to have attended and the certificates presented by him namely, Elementary School Daura and Mai Aduaa between 1948 and 1952, Middle School Katsina between 1953 and 1956 and Katsina Provincial College (now Government College, Katsina) between 1956 to 1961 and mentioned by the 2nd respondent in his curriculum vitae attached to Form CF 001, were not in existence as of those mentioned dates.”

They added, “The 2nd respondent in Form CF 001 filled and submitted by him to the 1st Respondent at Paragraph C, Column 2, Page 3, under SECONDARY, wrote “WASC,” thereby falsely claiming that qualification whereas there was no qualification known as WASC as of 1961.

“The petitioners contend that the 2nd Respondent was, at the material time, not qualified to contest election for the exalted office of President of the Federal Republic of Nigeria.

“The petitioners further aver that all votes purportedly cast for the 2nd and 3rd Respondents on 23rd February 2019 during the Presidential Election and as subsequently declared by the 1st Respondent on February 27, are wasted votes in that the 2nd Respondent was not qualified to contest the said election in the first place or at all.”

The petitioners named 21 Senior Advocates of Nigeria and 18 other lawyers to appear for them during the petition.

The legal team is led by a Senior Advocate of Nigeria, Livy Uzoukwu.

They sought among their five main prayers, that the tribunal should determine that Mr Buhari “was not duly elected by a majority of lawful votes cast in the said election” and therefore his declaration and return by INEC “as the President of Nigeria is unlawful, undue, null, void and of no effect.”

They also prayed that Mr Abubakar having been “duly and validly elected” ought to be “returned as President of Nigeria, having polled the highest number of lawful votes cast at the election to the office of the President of Nigeria held on February 23 and having satisfied the constitutional requirements for the said election.

They sought “an order directing the 1st respondent (INEC) to issue a Certificate of Return to the 1st petitioner (Atiku) as the duly elected President of Nigeria”.

They also asked the tribunal to rule that Mr Buhari “was at the time of the election not qualified to contest the said election”, and that he “submitted to the Commission affidavit containing false information of a fundamental nature in aid of his qualification for the said election”.

However, they sought as their alternative prayer, “that the election to the office of the president of Nigeria held on February 23, be nullified and a fresh election ordered.”

The petitioners are relying on 50 sets of documents which they, in the petition, gave INEC the notice to produce the original copies of those in its custody.

The PDP and Mr Atiku in the petition also sought to rely on, “the circulars/corrigenda/manuals issued by INEC for the conduct of the Presidential Election held on 23/2/2019; Polling Unit materials checklist; summary of total registered voters on units’ basis; summary of PVCs collected on units’ basis; Voter Registers and letters of complaints about irregularities and malpractices during the election addressed to the INEC/Police/other relevant agencies/institutions.”

They also sought to rely on “security reports relating to the election video/audio recordings/DVD/CD relating to the Election; Election Observers’ or Observers’ Reports; Newspaper/Television/ Radio reports and news; appointment letters and tags of PDP agents; expert reports and analysis; and photographs and GSM and other phone outputs”.