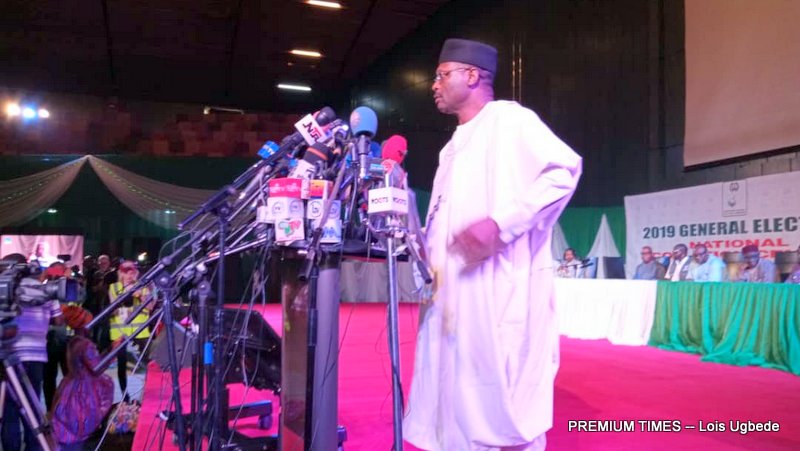 Why we postponed 2019 elections — INEC Chairman

The chairman of the Independent National Electoral Commission, Mahmood Yakubu, has given details of the “logistics and operational problems” he earlier said prompted the rescheduling of the 2019 general elections billed to start Saturday.

The commission announced the shocking decision just hours before the opening of polls after repeatedly assuring Nigerians and international observers it was ready for the crucial elections. It blamed logistics problems but did not give details at first.

Many Nigerians have condemned the postponement, especially its timing, and have accused the commission of insensitivity, noting that INEC had not apologised for the inconvenience its decision had caused millions of people.

At a news conference Saturday afternoon, Mr Yakubu said the commission had been involved in large scale operations in preparations for the polls that “it is therefore not unexpected that such a tremendous national mobilisation of men and materials would encounter operational challenges.”

He listed the key challenges to be delays in delivering ballot papers and result sheets, occasioned in part by flight challenges due to bad weather.

He said apart from the logistical challenges, there were attempts to sabotage the commission’s preparations, listing fire outbreaks at INEC facilities that destroyed smart card readers and voter cars. The fire at Anambra was the most serious of all, he said.

He said if the polls had gone ahead, it would have meant some states starting well ahead of others with the implication of the elections being staggered.

“Faced with these challenges, we initially thought that we only required a maximum of 24 hours to resolve the logistics issues involved and complete our deployment for the election,” he said. “This would mean shifting the elections to commence on Sunday 17th February, 2019. However, given the restriction of movement during elections, that could affect many voters who worship on Sunday. While the commission considering the following Monday, 19th February, 2019 as an option, our ICT department advised us that it would require 5-6 days to configure about 180,000 smart card readers earlier programmed to work only on election day, Saturday, 16th February 2019.”

Read his full speech below: