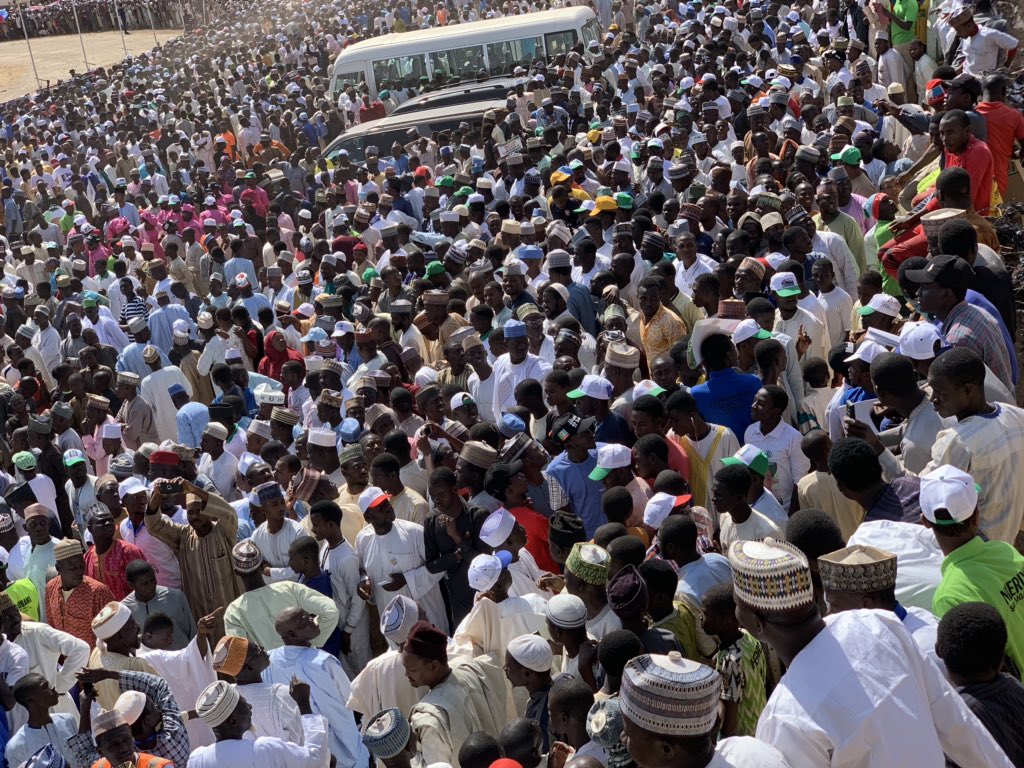 A campaign rally used to illustrate the story

With fake news gradually creeping into the Nigerian media, there have been several attempts by the federal government and some international organisations to help curb the spread, especially with the general elections approaching.

In November 2018, the British Broadcasting Corporation (BBC), published a report that showed that Nigerians usually fall prey to fake news because they are concerned about “not falling behind on the news” and being informed, among other reasons.

Prior to that period, the federal government launched a campaign against fake news where the information minister, Lai Mohammed, likened the effects of fake news to a time bomb waiting to explode.

He said the decision of the government to launch a campaign against fake news was linked to the possible effects of rumours that could cause crisis across the country.

Despite the efforts made to completely eradicate fake news from the media, the menace still persists.

With the general elections approaching, PREMIUM TIMES documented a trend of fake news being spread by supporters of several political parties as campaign strategies.

1- President Muhammadu Buhari had taken his campaign trail to Kano State to solicit the support of the government and people of the state in the forthcoming general elections.

Although he was received by an average crowd, the president’s special adviser on social media, Lauretta Onochie, posted a video of a large crowd in a stadium which she claimed were people of Kano who came out to receive the president.

Checks by PREMIUM TIMES showed the video was from an annual Islamic celebration, “Maulud of Sheikh Ibrahim Inyass” which took place at the Eagle Square in April 2018.

2- Prior to that, Ms Onochie took to Twitter to post a picture of food in packs with N500 attached to each of them.

In her tweet, she claimed that the presidential candidate for the Peoples Democratic Party (PDP), Atiku Abubakar, had distributed the food when he went to campaign in Sokoto.

She had written, “Keep them in poverty, give them handouts – Atiku in Sokoto yesterday.”

KEEP THEM IN POVERTY, THEN GIVE THEM HANDOUTS- ATIKU in Sokoto yesterday pic.twitter.com/JumaW5vi4A

Findings by the Centre for Democracy and Development showed that the photos dated February 2017, emerged when a Lagos-based Charity Organisation, Kokokun Foundation, distributed the food (and money) to the homeless and less-privileged in Lagos State.

3- Again, Ms Onochie posted a random picture of road construction. In her post, she claimed it was the Nasarawa-Jos road and hailed the president for “infrastructural developments”.

Further checks revealed that the photos were in fact, from a construction site in Rwanda.

After severe backlash from Nigerians on Twitter, she was forced to apologise, describing the initial photo as “a big mistake”.

4- In January, a former aide to ex-Presidents Goodluck Jonathan and Olusegun Obasanjo, Doyin Okupe, tweeted a fake picture to show massive turnout at the PDP campaign in Dutse, Jigawa State, the Guardian reported.

The picture which he captioned, “Pdp governorship campaign rally in Dutse Jigawa state 3rd Jan 2019” was used to distort the reality of what really happened during the campaign.

According to the Guardian, the picture likely first appeared online on September 10, 2017, to illustrate the preparation of “Ambazonia Independence”

Mr Okupe has since deleted the picture.

5- Festus Keyamo, the spokesperson of the Buhari Campaign Organisation, in October posted a picture of an abandoned rail track with a tree growing from it.

“This is how trees grew in-between rail tracks between 1999 and 2015. Those were the years of ‘Initiation and Started’, when they (PDP) ‘swallowed’ all the money but never completed. Now, this is the ‘Completion Era’ as the tracks are beginning to roar back to life,” he wrote.

A check by TheCable showed the picture was taken in the Middle East.

However, Mr Keyamo later claimed he had used the picture as “an illustration”.

6- In December 2018, one of Atiku Abubakar’s support groups known as Atiku Abubakar 2019, posted a picture of U.S President Donald Trump holding up a poster with Mr Abubakar’s face on it – allegedly endorsing him for the general election.

Although the group seems to have disappeared, it quoted Mr Trump as saying, “Support AtikuObi presidency to reduce unemployment, poverty and lifelessness of the economy as my govt has done in America. I think America first. Atiku thinks Nigeria first”.

Findings by Crosschecknigeria, a coalition of several media houses, showed the picture was fake.

The original picture was first used on September 3, 2015, when Mr Trump was the Republican presidential candidate for the U.S. presidential elections.

7- When reports of a Boko Haram attack on Metele, Borno State emerged, an All Progressives Congress (APC) publicity secretary, Joe Igbokwe, posted three photos on his Facebook page claiming they were from a Nigerian military offensive against Boko Haram.

Checks by AfricaCheck revealed two of the photos are not from Nigeria and one is three years old.

A reverse image search showed that the picture of billowing smoke was taken on November 8, 2004, in Fallujah, Iraq, by a US Marine.

The fighter jet is a Russian Sukhoi Su-25, snapped by news platform, AP while it took part in a joint military exercise with the army of Belarus in October 2008.

The third photo seems to date from December 2015, when the Nigerian army tweeted it with the caption: “Troops are continuing their advancement towards the main camp of the [Boko Haram] sect in Sambisa Forest.” – Allwell Okpi (30/11/18).

8 – In January, a former aviation minister, Femi Fani-Kayode, took to his Twitter account to allege that operatives of the Economic and Financial Crimes Commission (EFCC) had surrounded the home of suspended Chief Justice of Nigeria, Walter Onnoghen.

The spokesman of the Yoruba Socio-Cultural Group, (Anifere), Yinka Odumakin, shared a video clip to further buttress Mr Fani-Kayode’s claims describing the “siege” as desperation on the side of the ruling APC.

Messrs Fani-Kayode and Yinka Odumakin are critics of the Buhari administration and supporters of Atiku Abubakar.

Their claims turned out to be false as the embattled CJN and the anti-graft agency debunked the news. An enraged EFCC threatened to take the matter up.

Mr Fani-Kayode has since deleted the tweet and apologised to the EFCC.

Why Fake News Is On The Rise

Hassan Idayat, the director of the Centre for Democracy and Development (CDD), West Africa, believes the spread of fake news in an election season is typically geared towards garnering more votes.

In a piece made available to PREMIUM TIMES on the trend, she said fake news can also be aimed at dividing the electorate or “suppressing votes for one’s rivals”.

Fake news, she said, is a huge concern ahead of the Nigerian elections and shows no signs of letting up or being tackled.

She also blamed the proliferation of social media platforms for the quick spread of fake news.

“This is worrying as disinformation is provoking animosity along religious, ethnic and regional divides which are often already tense,” she said. “It is increasing distrust in both specific candidates and the process as a whole.”

She explains further: “False information in Nigeria spreads through various channels, but social media provides the cheapest and quickest ways to access millions. Through Whatsapp and Facebook, people share propaganda videos, made-up quotes, and fabricated articles made to look like they are from the likes of the BBC or Al-Jazeera.

“Meanwhile on Twitter, bots and trolls working for both Buhari and Atiku’s camps amplify false stories and contribute to the polarisation of the discourse through bullying and intimidation.

She said it is “too early” to assess the impact of fake information on the general elections.

She, however, said earlier instances of false stories spreading may be instructive.

With the increasing fear that the spread of fake news could mar the elections, Nigerians are advised to use fact-check mediums like Dubawa, Africa Check or tineye to confirm the authenticity of any picture.

It is also advisable to confirm a piece of information on any social media platform before sharing.