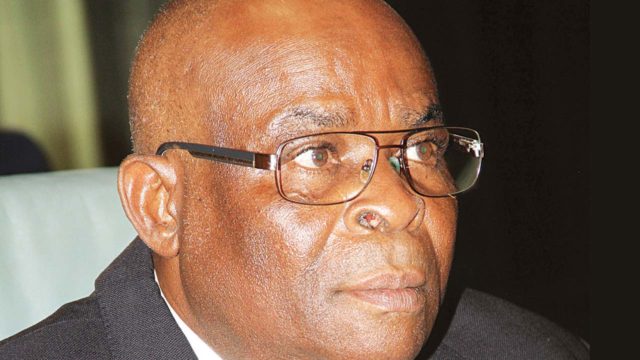 Why appeal court ruled against Onnoghen

The Court of Appeal On Wednesday rejected a request by suspended Chief Justice of Nigeria, Walter Onnoghen seeking to stop his trial at the Code of Conduct Tribunal (CCT).

It did this after deciding that the request was not in line with provisions of the law.

In a ruling, the court said Section 306 of the Administration of Criminal Justice Act (ACJA) prohibits the suspension of criminal cases based on an interlocutory application.

An interlocutory application is that which is brought based on only a segment of a case, already before the court.

The three-member panel of the court led by Abdul Aboki also ruled that the evidence before the court was not sufficient for the court to consider suspending the matter.

The court said the application was brought “on a vacuum” and such a request could not be granted by an appellate court.

Mr Onnoghen had approached the court through his lawyers, asking it to suspend his trial.

He did this on the grounds that the tribunal failed to entertain his motion challenging the jurisdiction of the lower court.

According to the applicant, his motion ought to have been heard before any other request is entertained in the tribunal.

Mr Onnoghen’s application was brought after the tribunal ruled on January 14 that it would continue the hearing of the case on January 22.

During the January 14 hearing, Mr Onnoghen failed to appear in court. The prosecution team, led by Aliu Umar had asked the court to make an order for the suspended chief justice to be served with the court summons personally.

Mr Onnghen’s lawyers led by Wole Olanikpekun also asked the court to entertain its motion challenging the jurisdiction of the matter, before taking further steps in the trial.

Mr Olanikpekun asked the court to treat his application challenging the jurisdiction on that first hearing date (January 14).

But the prosecution argued that the defendant was bound by law to appear in court and take his plea before any application could be heard.

Mr Umar also contended that the application challenging his court’s jurisdiction was supposed to be treated and decided, along with the main matter.

In its ruling, the tribunal chairman, Danladi Umar, directed that the court summons be served personally on Mr Onnoghen.

He ruled that the tribunal would adjourn till January 22 for motions to be heard in the matter.

Subsequently, Mr Olanikpekun and his team, believing that their request was denied recognition approached the Court of Appeal to contest the continuation of the trial.

The lawyers contended that an application challenging jurisdiction ought to have been heard before anything else.

However, in its ruling, the court of appeal said Mr Onnoghen’s lawyers appeared to have jumped the gun with their assumptions.

The court said the request challenging jurisdiction did not appear to have been sidelined by the ruling of the lower court.

The court read through the words used during the January 14 adjournment of the tribunal wherein the CCT slated January 22 for hearing of motions in the matter.

“Matter is hereby adjourned till Tuesday. Motions to be taken,” said judge, Abdul Aboki while reading through the tribunal’s ruling on January 14.

“The above stated decision is an adjournment for motions filed by the two parties,” the appeal court ruled.

It added that the applicant, (Onnoghen) had refused a similar request, based on the provisions of Section 306 of the administration of criminal justice act and should not be expected to be treated differently.

“According to Section 306 of the ACJA; an application for stay of proceedings in respect of a criminal matter shall not be entertained

“A court has inherent jurisdiction to grant a stay of proceedings where it is certified that enough evidence has been given for such,” said Mr Aboki, who read the ruling.

“Order for stay cannot be made in a vacuum. It is a matter of law and fact,” the court ruled.

Mr Onnoghen is facing trial for failing to declare his asset.

He has since been illegally suspended by President Muhammadu Buhari who cited a CCT directive.

The suspension was widely condemned by legal experts and other Nigerians.