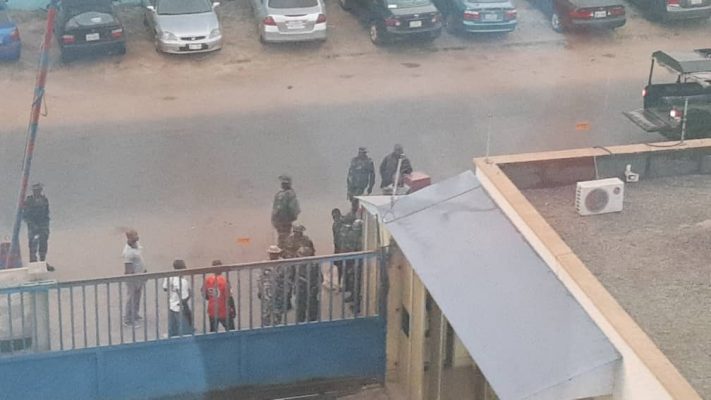 The soldiers arrested the regional editor, Uthman Abubakar, and one of the paper’s reporters, Ibrahim Sawab, during the raid.

More than two dozens of armed soldiers in five pickup trucks sealed up the main office of the paper in the Utako District of Abuja, and seized computers and other items, witnesses said.

In Maiduguri, armed soldiers, backed by agents of the State Security Services and the Civil Defence Corps, also sealed the paper’s regional office along Maiduguri-Baga Road. They arrested the two journalists named above.

The raid happened hours after the newspaper published a report detailing how the Nigerian military assembled troops and equipment in preparation for a massive operation to retake Baga and five other towns in Borno from Boko Haram.

Baga was seized in the last two weeks by members of the Islamic State in West African Province (ISWAP), the faction of Boko Haram affiliated to ISIS.

Daily Trust, popular in the northern part of the country, reported that more towns were captured by the insurgents.

Witnesses said the soldiers arrived the two offices in the afternoon and surrounded the properties disallowing staff from leaving as they searched for two journalists in Maiduguri and one in Abuja.

They asked for Hamza Idris, the political editor of the paper; Mr Abubakar, the Maiduguri bureau chief; and Mr Sawab, a reporter. It was not immediately clear whether Mr Idris was arrested.

The three journalists, PREMIUM TIMES learnt, shared bylines on a lead story that was published on the Sunday edition of the paper.

“The armed security personnel bundled them into one of the trucks and drove them off while directing other soldiers to seal off the premises,” one staff of the newspaper said about his two arrested colleagues in Maiduguri. He asked that his name is protected for fear of his safety.

The attack on the newspaper houses have alarmed journalists and reignited concerns about the government’s tolerance of a free press.

The chairman and secretary of the Borno State correspondents’ chapel, Haruna Dauda and Timothy Olanrewaju, in a statement, called on journalists to be calm.

They said they were “already on top of the matter, reaching out to the military command in Maiduguri.”

The spokesperson for the Army, Sani Usman, did not answer or return calls.

The Editor-in-Chief of Daily Trust, Mannir Dan Ali, told PREMIUM TIMES the issue was being resolved.

He spoke to this newspaper after the Maiduguri assault on his medium. Mr Dan Ali apparently did not know that the army would eventually descend on the Abuja headquarters of the paper.

He said the military was merely using the paper’s current edition as an excuse to clamp down on the newspaper, but that it was clear authorities were unhappy with Daily Trust’s coverage of the recent losses to Boko Haram.

“Government officials are trying to resolve the matter,” he said.

Mr Dan Ali also said, “The military is not happy with our reporting of the Baga attacks by Boko Haram and is just using today’s story as an excuse to clamp down on the newspaper”.