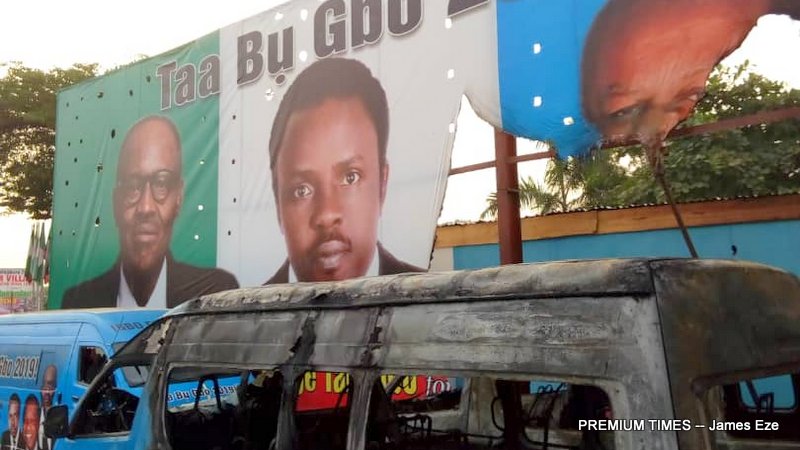 The campaign office of George Tagbo Ogara, one of the candidates laying claim to the Enugu State All Progressives Congress (APC) governorship ticket, was Saturday night attacked by unknown persons.

An eyewitness report says the resultant fire was controlled by officials of the State Fire Service who promptly arrived the scene.

However, Mr Ogara, in a reaction on the incident, claimed that the attackers used Improvised Explosive Device, IEDs to set the two buses ablaze.

Mr Ogara, who said he was in Lagos at the time of the incident, however, said he does not know where the attack came from.

“Improvised Explosive Device, IED, bomb is not a matter a civilian like me can intervene. The police and DSS will investigate that matter.

“Bomb is a military hardware it’s not something civilians can discuss and point accusing fingers at any person; it’s a very serious matter.”

Mr Ogara, who claims to be the duly elected Enugu APC governorship candidate for the 2019 election, is in court to challenge the party for publishing the name of a former senator, Ayogu Eze, as its candidate.

The tussle, which has lingered, has been fixed for hearing at an Abuja Federal High Court on January 10.

The police spokesman in the state, Ebere Amaraizu, confirmed the incident.

He said an investigation has commenced into the attack.

According to him, the incident occurred at Ogara APC campaign office by railway line close to Ogui junction Enugu.

“It was gathered that in the early hours of 23/12/18 fire incident had allegedly occurred at Ogara APC campaign office where two buses allegedly got burnt.

“However, the prompt intervention of the police operatives and fire service prevented its escalation and further destruction as the fire was promptly extinguished”, he said.

Mr Amaraizu noted that while a full-scale investigation has commenced into the incident with a view to finding its cause and possible culprits, security has also been intensified in the area.

Why my constituency projects are poorly implemented – Saraki