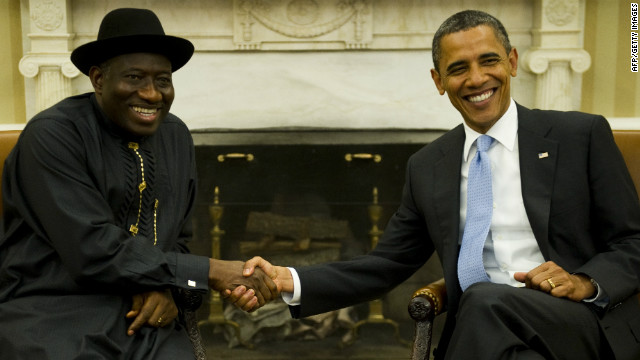 How Obama plotted my defeat in 2015 — Goodluck Jonathan

Former President Goodluck Jonathan has railed against the conduct of Barack Obama, describing the former U.S. president as overbearing and ‘condescending’ in his message to Nigerians ahead of the 2015 general elections.

Mr Jonathan said Mr Obama displayed an unusual level of bias during the 2015 elections, issuing a video appeal to Nigerians which all but advised them on which candidate to give their mandate.

“On March 23, 2015, President Obama himself took the unusual step of releasing a video message directly to Nigerians all but telling them how to vote,” Mr Jonathan said in his new book, ‘My Transition Hours’, which launches Tuesday.

“In that video, Obama urged Nigerians to open the ‘next chapter’ by their votes. Those who understood subliminal language deciphered that he was prodding the electorate to vote for the opposition to form a new government.”

PREMIUM TIMES obtained a copy of the book hours before its unveiling in Abuja on Tuesday. Mr Jonathan had strictly kept the book secret in order to avoid excerpts of it being published ahead of its formal launch.

Mr Jonathan lost the 2015 elections to now-President Muhammadu Buhari, marking the first time an incumbent president would lose reelection. He assumed office in 2010 following the death of President Umaru Yar’Adua, getting his own mandate of four years at the 2011 presidential election.

The days leading to the 2015 election were crucial for both Mr Jonathan and his cabinet officials. Only two weeks ahead, the election was postponed to March 28 from its initial date in February.

The six-week postponement drew outrage from within and outside the country, and Mr Jonathan’s opponents accused him of plots to perpetuate himself in office.

But the former president said he was not the only one responsible for the polls shift, saying other former leaders were all part of the decision, which was informed by the security exigencies at the time.

“The message was so condescending, it was as if Nigerians did not know what to do and needed an Obama to direct them,” Mr Jonathan said of the video message.

He lampooned Mr Obama, who was American president from 2009 until 2017, for saying “all Nigerians must be able to cast their votes without intimidation or fear,” but was reluctant to allow the Nigerian security forces drive Boko Haram insurgents away from the Nigerian territories they had been occupying in order to free Nigerian citizens there ahead of elections.

Mr Jonathan also took a harsh aim at former U.S. Secretary of State John Kerry, saying the top diplomat was nonchalant in his attitude towards his government, despite all efforts to make him understand that the decision to postpone election was in the overall interest of Nigeria.

“How can the U.S. Secretary of State know what is more important for Nigeria than Nigeria’s own government? How could they have expected us to conduct elections when Boko Haram controlled part of the North East and were killing and maiming Nigerians?

“Not even the assurance of the sanctity of May 29, 2015 handover date could calm them down. In Nigeria, the Constitution is very clear: No President can extend his tenure by one day,” Mr Jonathan said.

The U.S. Embassy in Abuja could not be reached for comments. It is a public holiday in Nigeria.

Mr Jonathan did not say what he did to offend the Western powers, but he painted a dreadful image of their attitude towards him in the waning days of his government.

“The foreign pressure on the issue of election rescheduling was intense. They maintained the curious posture of one who had been deceived before and therefore had every reason to cede no credence to our position. But there was no reason for such posture.

“The United States and the United Kingdom were especially agitated. David Cameron, then the U.K. Prime Minister, called to express his concern about the election rescheduling, just as John Kerry came from the United States to express further worry. It was at best unusual and sobering.

“In fact, John Kerry did not accept our reasons for the rescheduling. It was unbelievable because at the back of our minds we knew why the agitation was beyond what meets the eyes.

“There were deeper political interests. In attendance at the meeting of the Council of State were the decision to reschedule the election was taken were almost all the living former Heads of State in this country. That should have convinced John Kerry of the good intentions of the government.

“He cannot claim to love and defend Nigeria more than all our former heads of state present at the meeting. I have stated earlier how Kerry’s visit was designed to humiliate a sitting Nigerian president and clearly take sides in the country’s election.

Anyhow, the six weeks served us well. We received the military equipment we were expecting within that period and our Armed Forces commendable dealt a deserving blow on the terrorists and repossessed all territorial areas of Nigeria previously occupied by the terrorists. Boko Haram was deflated up to the point I handed over to my successor on May 29, 2015,” Mr Jonathan said.

Why I pardoned ex-Governor Alamieyeseigha — Jonathan