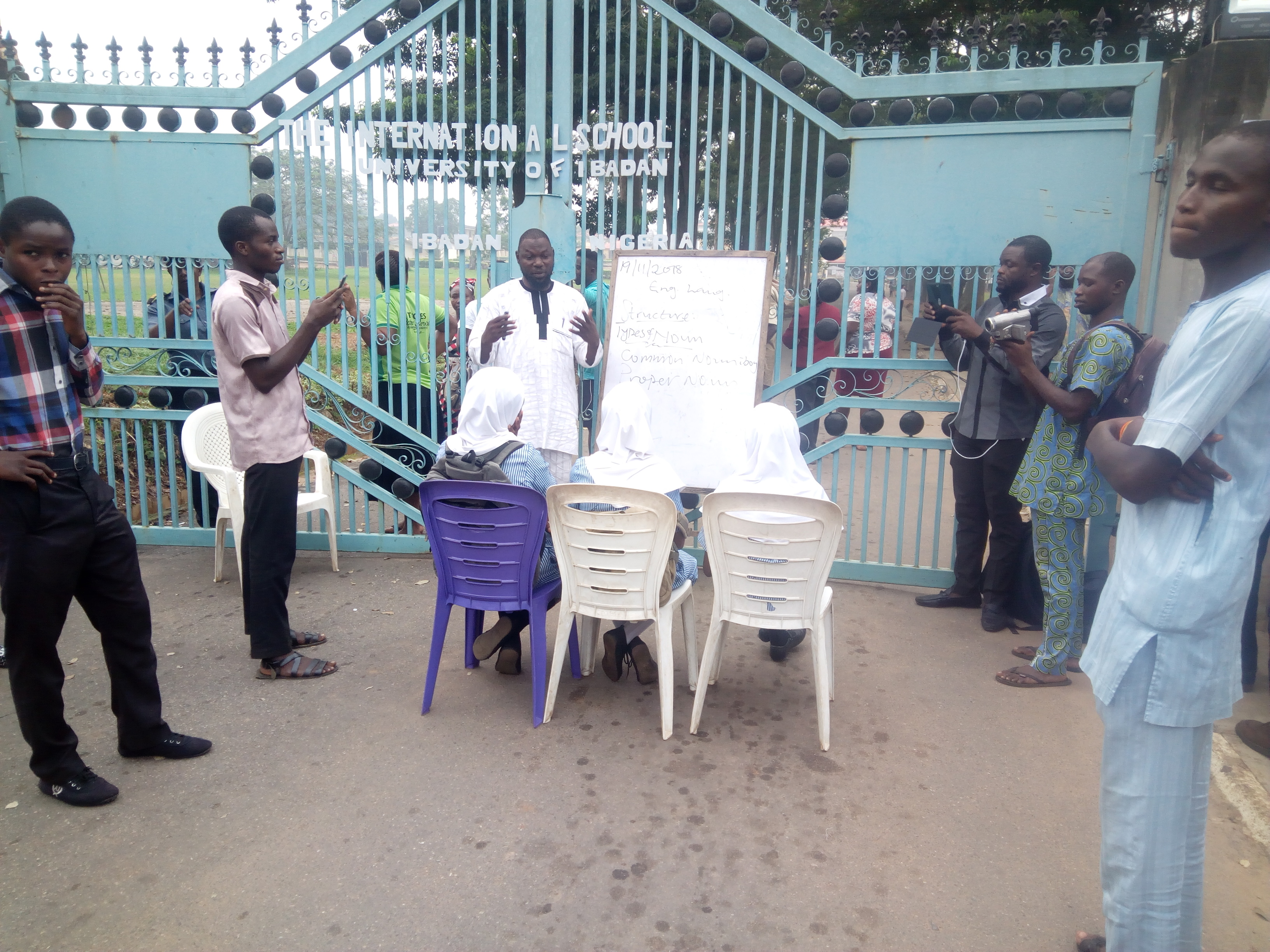 Protest at the University of Ibadan International School over Hijab controversy

A group under the aegis of Muslim Community of Oyo State (MUSCOYS) on Monday held a demonstration in front of International School Ibadan over the ban on hijab as the school was again forced to shut down.

The management of the secondary school run by officials of the University of Ibadan shut it down last week Monday after some Muslim female students appeared in hijab, which the management said was against the school’s dress code.

When the school reopened today (Monday) following a resolution by its Board of Governors that the status quo on dressing be maintained, students who appeared in hijab were barred from entering the school.

The development drew the ire of the group, including some parents, who waved placards and chanted protest songs at a rally a few metres from the school’s main gate.

Some of the inscriptions on the placards read: “Hijab: Our Fundamental Right,” “How Does My Hijab Affect You?” and “Hijab, My Pride, Their Fear.”

Apparently fearing the protest could degenerate into violence, some parents rushed into the school to pick their children.

Shortly after, the management issued a notice that the school has been closed until further notice.

Ismail Busari, the Secretary-General of MUSCOYS, described the demonstration as a “peaceful rally” and the first step to drive home their demands.

“Unfortunately, at this time and age, fundamental rights of the minority not to talk of the majority are being trampled on,” Mr Busari said. “They’ve denied our girl children access to basic education for almost a week now only because they don a small headscarf — a shoulder length hijab.

“Even in Article 7 of the Students’ Handbook of the school that talks about uniform, nothing there bans adorning hijab. Nigeria’s Constitution and the Declaration of Human Rights are superior to any other internal rule of any establishment.

“Section 32, subsection 2 guarantees the right of Muslim ladies to adorn hijab anywhere. We do think we are using Common Law in Nigeria but as you can see Common Law is no longer common to all. It favours some people and it is against some others. What distraction does it (hijab) cause? How has it infringed on the rights of others?” an agitated Mr Busari stated.

Asked if internal means were being adopted to resolve the issue, he said several letters were written to the school’s authorities but to no avail.

The Principal of the school, Phebean Olowe, however, said no letter has been submitted except one the management received a week ago.

The chairman of the Board of Governors, Olayinka Aderinto, a deputy vice chancellor of the university who is also a Muslim, had stressed the school is not an Islamic school but a private school.

Reminded of this, Mr Busari said: “That is baseless. In fact, it doesn’t make sense to call International School, University of Ibadan, a private school. On their website, go and check, what is there is that the school was established in March 1963 by the University of Ibadan,” he explained.

“Even if it is as claimed, the constitution of country guarantees that you can manifest your religion both in public and in private as stated in section 32, subsection 2,” Mr Busari argued.

He said permitting hijab would not affect anything. In fact, he said, it would enhance focus.

“The smartest student in the world, Sheila Ibrahim, is an hijab-wearing girl from Osun State who had distinctions in all her courses in Harvard University. The first time in the history of the school. Islam enhances focus.”

During his Friday sermon last week, the Chief Imam of the university said a letter had been written to the University’s Vice Chancellor on the issue, cautioning, “mob action should be shunned and external bodies should stay out of the issue.”

In response to this, Mr Busari said, “We are together. We are supporting their cause. We are doing this to make them see reason why they should listen to the Imam.”

He went on to appeal to the government and the National Assembly, “to enforce the right of our children.”

Another parent in his mid–forties called for settlement of the issue without letting it affect the academic life of the students.

“Let there be peace. Uniform should be uniform as stated. I don’t know why we are just disturbing ourselves. Uniform as it has been stated by the school should be what is accepted,” he added.

Speaking to our correspondent, another parent in his mid–thirties, however, reacted thus:

“What we want is that a Muslim lady should be seen as a Muslim lady. Abroad, they allow girls to use hijab. I don’t see anything bad in them using hijab. It does not affect their academic life.

“When they are out of ISI, they see people who use hijab. It is not about the school (ISI) alone. After the school hour, we see Muslim lady using it. It is what they use every time.”

‘Give us some time, we will resolve the issue’ — DVC Academics

On his arrival at the scene, Mr Aderinto, a professor and Chairman of the Board of Governors, the highest decision-making body of the school, expressed displeasure at the demonstration.

He promised that normalcy would be restored in due time.

“That it happened this morning is just unfortunate. I don’t think this is about hijab again. Maybe some of them have another motive to destroy the school; I don’t know.

“We are appraising the situation. We would take the decision that is in the best interest of the parents and the children. Just give us some time. Give us some few days. We would resolve the issue.

“You know, we also have to be very careful. We don’t want something that will lead to bloodshed. That will not even augur well for our school. Because even if they want to foment trouble, we have to remain calm. That’s the position we have taken in the last one week.”

First term examination in the school is in about two weeks. Mr Aderinto assured the parents the uproar would be dealt with appropriately by then.

“We are handling it. This children are our children. Remember, last week when the school was closed, SSS 3 students were being taught. We know what is happening, and we assure you that faster measure would be out in place.”

What the weather will look like on Tuesday — NiMet