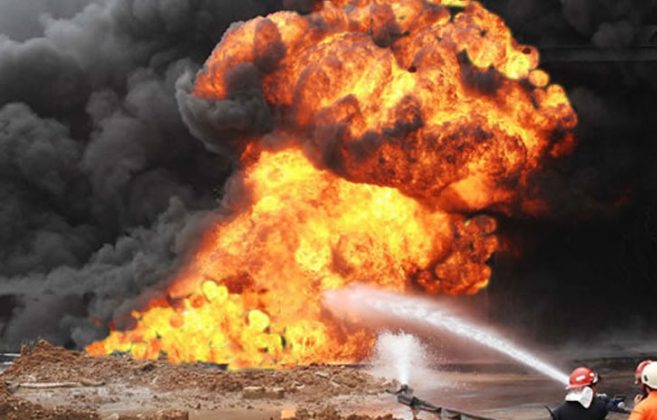 Explosion used to illustrate the story

There is an embarrassing confusion over the number of persons killed in Friday’s explosion at a pipeline of the Nigerian National Petroleum Corporation (NNPC) in Umuaduru and Umuimo villages in Osisioma Ngwa Local Government Area of Abia State.

Officials, including of the state government, the National Emergency Management Authority (NEMA) and a senator are offering widely conflicting figures, less than a week after the disaster.

Initial reports stated that at least 24 persons were confirmed dead from the incident.

But this figure was on Wednesday dismissed as grossly inaccurate by a former governor of the state, Theodore Orji, who is now a senator.

Speaking at the Senate chamber, Mr Orji said the death toll had reached 150.

Even after Mr Orji spoke, NEMA and the Abia State Government were still insisting on vastly different figures, demonstrating an alarming shoddiness in disaster management in Nigeria.

Asked to confirm the claim of the senator, Abia State NEMA head of operations in Imo and Abia, Evans Ugho, told PREMIUM TIMES in a telephone interview that the records of the agency showed 60 persons died.

He said the figure was obtained when officials of the agency visited the scene the day after the incident.

”The incident happened on Friday so on Saturday in the evening before we left, the total number of death was 60,” he said.

”Many of the victims were taken to the hospital, there was also information that more people transferred at different locations died. So we cannot confirm the (present) figure,” Mr Ugho added.

He confirmed there are many conflicting reports concerning the number of the dead.

”There are various published sources. A newspaper said the youths said 115 died, the traditional rulers said 200 people died, so there are conflicting stories everywhere. And they said as at Saturday many people were dying.”

Asked if NEMA was in touch with victims that survived the blast, Mr Ugho said no.

However, when PREMIUM TIMES reached the Chief Press Secretary to the Abia State Governor, Enyinnaya Apollos, he insisted the total number of death is 28.

Mr Apollos further disputed that NEMA officials had been to the scene, five days after the incident.

”I and the governor were there today (Wednesday) and the PDP presidential candidate, Atiku Abubakar, was also present,” Mr Apollos said.

“This is the second time we are visiting there. So from the details given to us from both the community and the local government chairman; with the woman that died in the morning, (the number) is about 28,” Mr Appolos said.

When told NEMA also provided a different figure, the governor’s spokesperson said, ”NEMA is completely not correct. Ask them if they have ever been there because they have not visited.

”Because if they have been there, what have they done to show that they have visited there? As I told you, the governor was there on Saturday and today; we both went there. That figure from NEMA is incorrect,” he stressed.

The Speaker of the Abia State House of Assembly, Chikwendu Kalu, has said the state government would institute an investigative panel to ascertain the immediate and remote causes of the explosion.

“It was a fire outbreak not because of vandalisation but dereliction of duty by NNPC and police. They knew that it was leaking and they even charge villagers N1200 to scoop fuel from the leaking place,” Mr Orji said.

“So it was a phone that rang that day that caused the fire outbreak. Chairman of the local government had called the depot manager but he didn’t come,” he added.

Hours after the Friday incident, the NNPC had suggested in a public statement that the fire was caused by pipeline vandals.