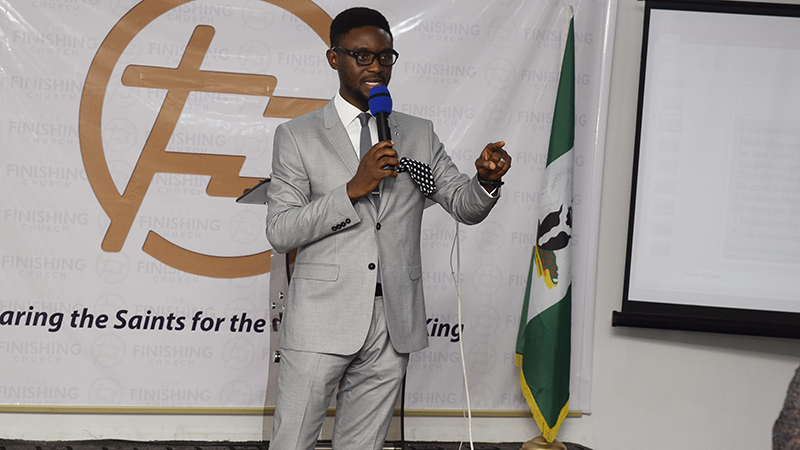 In this interview with PREMIUM TIMES Evelyn Okakwu, the young and inspiring Frederick Adetiba, lead pastor of ‘The Finishing Church,’ shares his vision of inspiring Nigerian youth towards accomplishing their goals in life and his one year experience of being a cleric.

He tells this newspaper about his first year as leader of the Finishing Church, the current political realities in Nigeria and his belief that a younger person than the current president, Muhammdu Buhari, would emerge leader of Nigeria in 2019.

PT: How would you describe your first year as leader of The Finishing Church?

Fred: The experience has been awesome, I must say. It’s been an excitingly challenging period, and most importantly, a learning and building process for me.

There’s also the part of being responsible for every member of the church. This is particularly challenging because the focus is not merely on their spiritual development, but the development of the total man. In The Finishing Church, we focus on every aspect of human life: relationships, career, family, marriage, sustenance, as well as impacting the larger society positively etc.

God has been faithful though. I am understanding that this is not about me or my personal capacity. What God needs are willing vessels to work with and work through. He is the one virtually doing everything. I only make myself available, and in the process, I am also becoming a better person and increasingly becoming like Christ. The transformational process makes the entire thing more exciting.

PT: You are a graduate of sociology from the University of Jos, as well as a master’s degree holder from the Stellenbosch University in South Africa. How did you arrive at becoming a pastor?

Fred: Everybody has a calling and a ministry ordained by God even before we were born. In my case, I did not plan to become a pastor. If it were my decision, I would definitely be doing something else. But God’s plan is always the best for us. I gave my life to Christ in 2000, and since then I have been active in church. After I gave my life to Christ, I knew I had a calling, particularly to young people. And I have been doing this since then, while providing support for the different pastors God has used to shape my life.

Initially, I had thought playing a background role in church and mentoring young people alongside would suffice. I was actually fine with the idea until 2015 when God showed up and said it was time for what He had been preparing me for all these years.

I had a bit of back and forth with God on this and I eventually yielded. The blueprint was thereafter received. There was an ordination and commissioning in June 2017 after which The Finishing Church started.

The interesting thing, however, is that my background in Sociology has greatly shaped my person, which is helping me make sense of my pastoral responsibilities. Sociology is the science of man and the society. It provides different perspectives that help us understand how society works as well as how to make it better for the benefit of man. As a pastor, one of my responsibilities is to train and equip people to be functional human beings who would in turn make positive impact in the society. I now get to make contribution to the development of my society as a pastor and as a sociologist, in addition to being a strategy management consultant and a writer.

PT: What motivated the writing of your book on Faith and Governance?

Fred: My discipline, Sociology and my faith, Christianity, influenced the focus of my writing. When I started my column on PREMIUM TIMES, it was mainly on faith. However, as time went by, I couldn’t resist writing on governance, particularly after realising how we have not been making a significant difference in our society as Christians. We were designed to succeed where others are failing morally. To summarise my response, I am a faith person, a Kingdom believer, who is deeply passionate about good governance for the benefit of the people.

PT: How would you describe the role of the church in Nigeria’s current democracy?

Fred: The Church is essentially an institution for the production of value-driven and highly functional humans. The Bible is full of teachings that are designed to build lives; raise people of integrity, competence, excellence, transparent honesty etc., which are all attributes of Jesus Christ. Therefore, true Christians are meant to make a difference in any sector of the society they function in, thereby contributing immensely to the development of our democracy and the country at large.

PT: Do you think the church has a primary responsibility to ensure that Christians participate in elections?

When God sent the Children of Israel to exile in Jeremiah 29, He told them to pray for the peace and prosperity of the country He was sending them to, because their well-being is dependent on the well-being of that country. Christians have the same obligation to participate in elections as everyone else. We have to register to vote as well as seek for elective offices. If we don’t work to make Nigeria better, we will all feel the negative impact of a troubled country.

PT: Do you think the church should take financial donations from political leaders facing corruption charges?

Fred: I know some people would argue that they are mere allegations because most of those politicians have not been convicted. However, it is not difficult to spot politicians who are clearly living above their means, most of whom don’t have clear and legitimate private sources of income aside being in politics. These same politicians are directly and indirectly responsible for the deplorable state of our people. So No! The church should not collect donations from corrupt politicians.

The challenge is that these thieving politicians think they are absolved of their sins of looting our common wealth when they bring huge donations to the church. That is not the case and the church should not encourage them. Again, the church in some instances may not be able to stop them from giving like every other person. Soliciting donation from and celebrating known corrupt politicians is over the line for me.

It is unfortunate that in Nigeria today, some pastors and churches celebrate the return of unrepentant ex-convicts jailed for stealing from the people.

PT: There has been a lot of complains by mostly Christian leaders about lopsided political appointments in the country’s current political system. How would you react to this?

Fred: Personally, I don’t view events in my society through religious lens and I don’t think its mostly Christian leaders that have been complaining about the lopsidedness of political appointments under President Buhari. It is evident to every reasonable mind that there is no fairness in the appointments of President Buhari. Nigeria is a country of about 180 million people. I believe every region of the country has competent and credible men and women who can be appointed to help run this government.

It is however unfortunate that the president feels it’s only the people known to him that can get the job done. With the state of affairs in the country presently, it is evident that that is not the case. Security is one of the major challenges we are faced with and heads of most of our intelligence and security outfits are of Northern extraction. Aside the escalation of the problem, we have witnessed poor coordination and inter-agency rivalry between these agencies headed by his kinsmen.

PT: Do you think Nigerian youth are doing enough to be considered active participants in Nigeria’s democracy?

Fred: Nigerian youth are doing amazing things in different forms to strengthen our democracy making them active participants in our democratic process. Their participation has increased tremendously, particularly from 2011 elections. We see young people managing and running election campaigns for political parties; they are involved in election monitoring and observation, they serve as ad hoc staff during elections, they run NGOs that call for credible electoral process. These and many more are the different ways they have been participating actively in deepening Nigeria’s democracy.

What is now needed is an open political space that would enable young people to run for elective offices. It is not enough for young people to remain at the fringes any more. I believe they should be actively involved in the decision making process.

PT: What role do you believe youth should primarily play in the fight against corruption?

Fred: When it comes to corruption, it’s not about age or gender. It is a general societal problem. There are old people who are corrupt and there are young people who are waiting for the opportunity to start stealing and engaging in other forms of corruption. I am concerned that significant number of the young people we are clamouring should be given opportunity to run for office are not significantly better than those who are there right now in terms of strength of character. They may have new ideas and energy, but that is not enough; character is equally important.

Apart from the plethora of laws that are designed to discourage people from engaging in corrupt practices, most of which are not effective as a result of human factors, there are no institutions dedicated to shaping and building character in our society anymore. The family, from where the foundation of moral character is expected to be laid, is largely failing in its responsibility. Our educational system is also is also not fairing any better. The other institution that is poised to help build moral character is the church. Unfortunately, it doesn’t look like the number of churches and Christians we have in Nigeria has any effect on the state of our country; which begs the question, what are we teaching our people?

It is to this effect that we are starting a new conversation on the role of the church in nation-building. The first major discussion on this was heard at the first year anniversary event of The Finishing Church that held on the 18th and 19th of August 2018 here in Abuja. Some of the topical issues we discussed include Christianity and corruption, Christianity and Political leadership in Nigeria, among others. We are hoping that this conversation would help us begin to see where the gaps are in the primary responsibility of the church in building people with moral character that would in turn impact our country positively.

Do you believe that a youth can emerge the president of Nigeria in 2019?

It would be difficult for a youth to emerge president of Nigeria come 2019. What I want and believe is possible is a younger person than the present President.

SATIRE SATURDAY: Fellow Nigerians, here’s how to ‘Kachikwu’ your way to the top