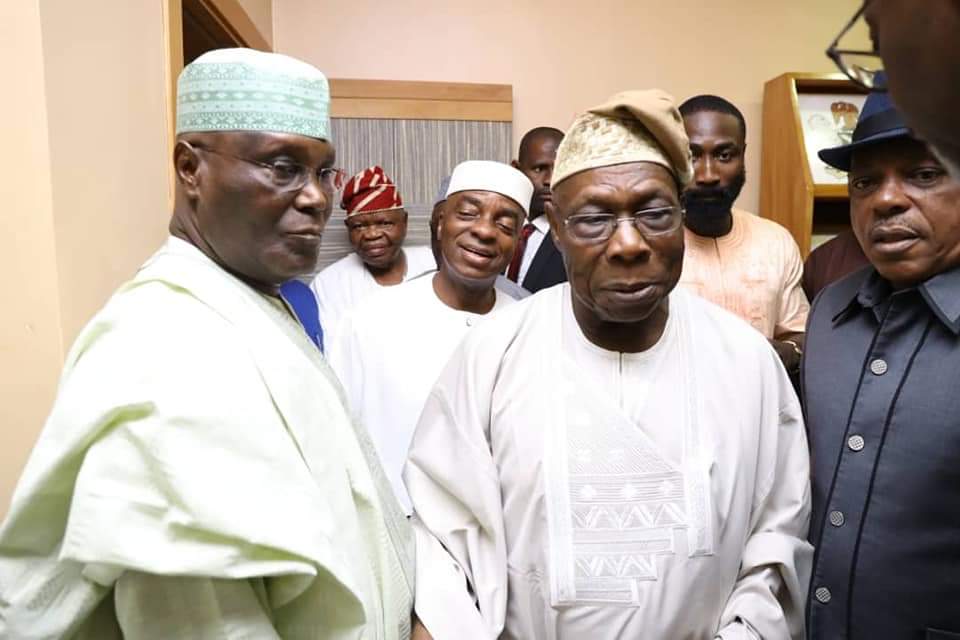 Atiku Abubakar and his entourage at Obasanjo's abode in Otta [Photo: @SaharaReporters]

Former President Olusegun Obasanjo on Thursday said he has reviewed his stance on not backing his former deputy for the presidency of Nigeria.

Mr. Obasanjo spoke when Atiku Abubakar and leaders of the Peoples Democratic Party visited him at his Abeokuta home.

He said he believed Atiku has ‘re-discovered and re-positioned himself’ and is now good enough to enjoy his support in the next election.

Mr. Obasanjo said, “Let me start by congratulating President-to-be, Atiku Abubakar, for his success at the recent PDP Primary and I took note of his gracious remarks in his acceptance speech that it all started here.

“Yes, when it started, it was meant for Atiku to succeed Obasanjo.  In the presence of these distinguished leaders of goodwill today, let me say it openly that we have reviewed what went wrong on the side of Atiku.  And in all honesty, my former Vice-President has re-discovered and re-positioned himself.  As I have repeatedly said, it is not so much what you did against me that was the issue but what you did against the Party, the Government and the country.

“I took the stand I had taken based on the character and attributes you exhibited in the position you found yourself.  I strongly believe that I was right. It was in the overall interest of everyone and everything to take such a position.

“From what transpired in the last couple of hours or so, you have shown remorse; you have asked for forgiveness and you have indicated that you have learnt some good lessons and you will mend fences and make amends as necessary and as desirable.

“Whenever or wherever you might have offended me, as a Christian who asks for God’s forgiveness of my sins and inadequacies on daily basis, I forgive and I sincerely advise you to learn from the past and do what is right and it will be well with you. Obviously, you have mended fences with the Party and fully reconciled with the Party.  That’s why today, you are the Presidential Candidate of the Party.  In addition to appreciating all that the Party has done for you, may I advise you to work together with all those who contested for the Party’s flag with you as a team for your campaign.

“There are still areas, nationally and internationally, where you have to mend fences and make amends.  You will know how to handle what is already out and what may yet be put out by the opposition.  But, I am convinced that if you continue with the attitude that brought you here with these distinguished leaders of goodwill, with remorse and contrite heart, the rest of the coast within and outside the country can be cleared.  And if there is anything I can do and you want me to do in that respect, I will do.

“I am sure with the right attitude for change where necessary, and by putting lessons learned by you to work, you will get the understanding, cooperation, support and mandate –  all at the national level.  With Nigerians voting for you, it will mean that you secure their forgiveness and regain their confidence. It will be with the hope or assurance of a Paul on the road to Damascus Conversion. After all, change and conversion are of man. I believe that with a contrite heart, change is possible in everybody’s life and situation.

“For me, relatively and of all the aspirants in the PDP, you have the widest and greatest exposure, experience, outreach and possibly the best machinery and preparation for seeing the tough and likely dirty campaign ahead through. From what I personally know of you, you have capacity to perform better than the incumbent. You surely understand the economy better; you have business experience, which can make your administration business-friendly and boost the economy and provide jobs.

“You have better outreach nationally and internationally and that can translate to better management of foreign affairs.  You are more accessible and less inflexible and more open to all parts of the country in many ways.  As Pastor Bakare, one-time running mate of the incumbent President said, “You are a wazobia man.”  And that should help you in confronting the confrontable and shunning nepotism.

“As you know, along the road to where you are today, many leaders and ordinary people cooperated and overtly and covertly worked hard.  On your behalf, I thank them all.  May their coast continue to be expanded.  And when you become Nigerian President which, insha-Allah, you will be, remember what we did together in government – we ran an administration by Nigerians for all Nigerians where merit and performance count more than blood relationship, friendship or kith and kin.  Although some time and ground have been lost, you should endeavour to start from where we stopped and recover some lost ground, if not time.

“Please uphold truth, integrity, principles, morality and fight corruption, crimes and insurgency.  The fundamental law of the land, our constitution must be scrupulously defended. I make one demand and one demand on you today, I need you to say before God and man that you will always remain irrevocably committed to upholding ALL the provisions of the Constitution of the Federal Republic of Nigeria and the whole country will remain your single indivisible constituency.

“Constitutionalism, popular participation and inclusiveness are pre-conditions for reversing the deficits of the past three and half years. They will ensure abiding faith in our indivisibility, oneness and faith in the survival of all against none.

“The fundamentals for our development, economic growth and progress are hard and soft infrastructure.  Remember to always give adequate places in your administration to our youth and women.

“All the authorities involved with the preparation, all processes and conduct of the election must ensure that the election is free, fair and credible.

“Once again, congratulations and I wish you well.  My distinguished brothers and leaders of goodwill, thank you for making this happen.  I will now count on you to encourage all hands to be on the deck to take Nigeria to the level God has created it to be – autopilot level.”

Atiku had on Sunday emerged the presidential candidate of the Peoples Democratic Party.

Mr. Obasanjo had on August 3 exclusively told PREMIUM TIMES the former vice president should not count on him for support in his  bid to actualise his life-long ambition of being elected president of Nigeria.

“How can I be on the same side with Atiku?” he asked. “To do what?”
“If I support Atiku for anything, God will not forgive me. If I do not know, yes. But once I know, Atiku can never enjoy my support,” he added.

Mr Obasanjo said his remarks should not be interpreted to mean a personal battle with Atiku, coming as 2019 presidential campaign gathers steam with Mr Abubakar amongst the front-runners.

“Most of you do not understand the way I operate. And I thought your own paper (PREMIUM TIMES) will understand better.”

“I know Atiku very well. And I have mentioned my position with Atiku. My position has not changed.

“But on political ground, my position has not changed. If I support Atiku for a political office other than the one I supported him in the past when I did not know him, maybe, but not now that I know him, God will not forgive me.”

That comment created the impression that Mr Obasanjo was not ready to soften his borderline disposition to his former vice president of eight years.

After the former president said he would not support President Muhammadu Buhari for a second term, there was widespread speculation that he would back anyone presented as the major challenger, even if this turned out to be Atiku.

The Yoruba socio-political group, Afenifere, had visited Mr. Obasanjo earlier this week to plead with him to meet with Atiku and possibly back him for president in the coming election.