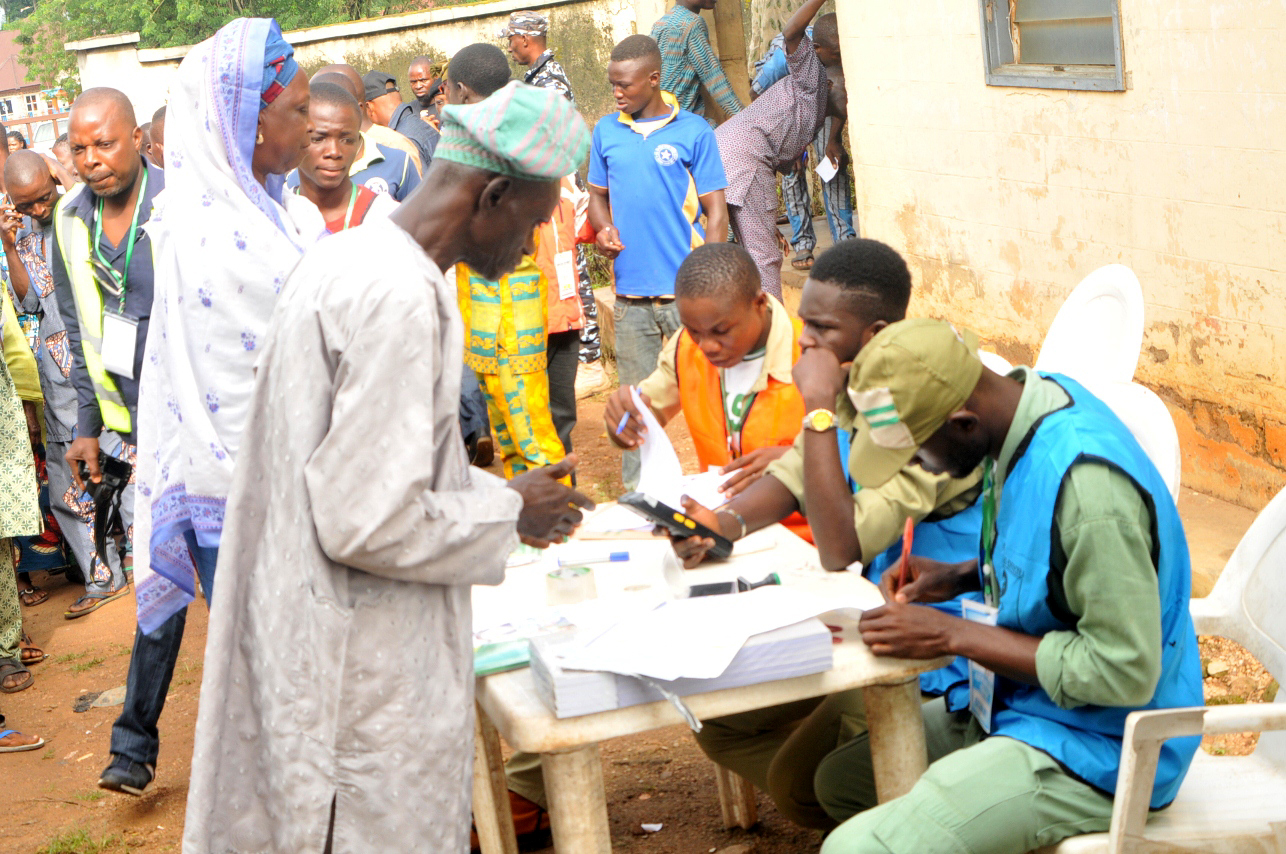 File photo of an elderly voter being accredited, at Sekonanear Ife, during the 2018 Osun state Governorship Election on Saturday (22/9/18). 05010/23/9/18/Timothy Adeogodiran/JAU/NAN

They said thugs working for the ruling All Progressives Congress (APC) denied them entrance into polling units. They also alleged that the thugs seized their voting credentials and beat them up.

They spoke with PREMIUM TIMES under anonymity because they are residents in the community and feared being victimised by political operatives in the area.

“Whoever announces APC as winner of this election will get home and die,” one of the protesters who said he escaped attacks by suspected APC said, fuming and cursing profusely.

“We were going there peacefully to vote but they accosted us with guns and machetes. They are APC thugs. They told us to hand over our voters’ cards and they beat many people.

“For now, I don’t have my voters’ card. I cannot vote. This is denying us of our right,” another resident who was allagedly prevented from voting said.

An elderly woman was also turned back, telling PREMIUM TIMES the intimidation of resents in the community started a day to the election on Wednesday.

“They did not allow us to vote. They have started shooting since yesterday. Our local government chairman coordinated the attacks,” she claimed. PREMIUM TIMES could not reach the chairman for comments, and the claims by the residents could not be independently ascertained. Still they mirror the other complaints coming out of Orolu general area since polling opened in the re-run on Thursday morning.

The man arrived at the polling unit to cast his vote but was accosted by another man suspected to be a political thug.

“What is your business here?” the suspected thug asked the PDP supporter.

The PDP supporter then asked the suspected thug to identify himself, which he failed to do, sparking a furious exchange of words. Police officers immediately intervened and prevented a violent confrontation between both.

The suspected thug was initially held by the police, but was released only a moment later, even though there was no immediately confirmation that he actually registered to vote at the polling unit.

The ‘screening’ of registered voters for accreditation was done under the supervision of security agents.

The business of vote buying, which has characterised Nigerian elections in recent months and was witnessed in the election proper last Saturday, was also observed by PREMIUM TIMES in Ifon Osun.

Persons said to be agents of the governing APC carried out the practice, brazenly dolling out N20,000 each to voters who were willing to surrender their voters’ cards, PREMIUM TIMES can report.

A voter told PREMIUM TIMES APC agents had collected the PVCs of some voters prior to election day.

This journalist observed how these voters walked into the Polling Unit one, Ward 8, collected their voters’ card and voted.

At the polling unit, two APC party agents, one on ‘Ankara’ fabric and the other on shirt and trousers, stood near the voting cubicle to observe who they voted for, an action that should not have been allowed to take place with Nigeria’s open-secret ballot system.

The presence of suspected APC thugs and overzealous security agents made it difficult for this reporter to capture the electoral malpractice on video, which he witnessed only moments after he regained freedom after being detained by police officers in the LGA.

When contacted on phone, Mohammed Dankwara, a deputy police commissioner who supervised police security arrangement in Orolu LGA, told PREMIUM TIMES there were no cases of intimidation.

“Everywhere around here is peaceful,” Mr Dankwara said. “We have international observers here who are white men and they did not complain of anything.”

“I am assuring you that the election in Orolu is going on peacefully,” he added.