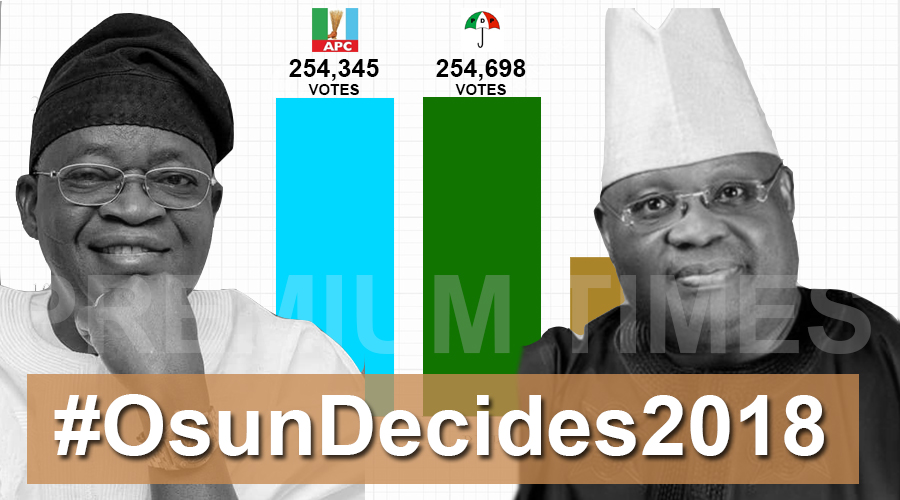 OsunDecides2018: APC, PDP claim Omisore has agreed to work with them

As residents of seven polling units in Osun State get set to determine who will be the next governor, leaders of the two major parties have both claimed to have secured the crucial support of Iyiola Omisore.

Mr Omisore whose party, SDP, came third in the governorship election held on Saturday, stands no chance to be elected governor after Thursday’s supplementary poll.

Ademola Adeleke of the PDP scored the highest with 254,698 votes ahead of Gboyega Oyetola of the APC, who polled 254,345 votes. Mr Omisore, who hails from Ife Central local government, polled 128,049 votes to occupy the third place.

The supplementary election was declared on Sunday after the electoral commission, INEC, declared the governorship election inconclusive. INEC said the margin between the two leading parties, PDP and APC, is less than the number of cancelled votes (3,498) in the seven polling units.

PREMIUM TIMES earlier reported how Mr Omisore’s support was crucial for any of the APC or PDP to win the supplementary election.

To convince the Ife-born politician to support the PDP, the opposition party sent a delegation led by Senate President Bukola Saraki to meet with Mr Omisore. After the Monday meeting, Mr Saraki said he believed Mr Omisore would support his party.

“After meeting with him, I am more optimistic now that with his support, PDP will win. We are confident of a good outing. I am more confident now,” the senate president said.

“We have agreed to work together because our goals are the same. We all want good governance in Osun State. Over the next 24 hours, we will work out the details.

However, on Tuesday, an APC delegation led by the party chairman, Adams Oshiomhole, and governor-elect of Ekiti, Kayode Fayemi, met with Mr Omisore.

By Wednesday morning, a spokesperson for the Information ministry, Joseph Mutah, sent a message to journalists that Mr Omisore at the meeting agreed to work with the governing party.

“The SDP Candidate in last Saturday’s Governorship Election in Osun State, Chief Iyiola Omisore, has agreed to work with the APC in Thursday’s rerun.

“The deal was sealed after a meeting between Chief Omisore and an APC Team led by Chairman Adams Oshiomhole in Osogbo early Wednesday,” Mr Mutah said in the short message accompanied by photos from the meeting.

Mr Omisore had earlier on Monday after the meeting with the PDP leadership explained the conditions upon which he would support any of the two parties.

“I have given my programmes to both APC and PDP. My programme is like this; payment of salaries and pensions. Good governance is what is important to me,” Mr Omisore told journalists after the meeting.

“Anyone between the two that will do that will get my support. I am passionate about Osun and my interest is the welfare of the people of this state. I have told those sent to me. At the appropriate time, we will tell you where we are going,” he said.

When contacted on Thursday after the meeting with the APC delegation, an aide to Mr Omisore told PREMIUM TIMES his principal was yet to declare support for any of the two parties.

“It is the same call for him to support APC for the re-run, but he has not decided on who to yet. He is interested in who will adopt SDP’s manifestos for good governance in Osun,” the aide said asking not to be named as he was not authorised to speak to the media on the matter.

With about 24 hours to the Thursday election, all eyes will now be on Mr Omisore, on who he would formally support for the election, and whether his supporters in those seven polling units will abide by his call.