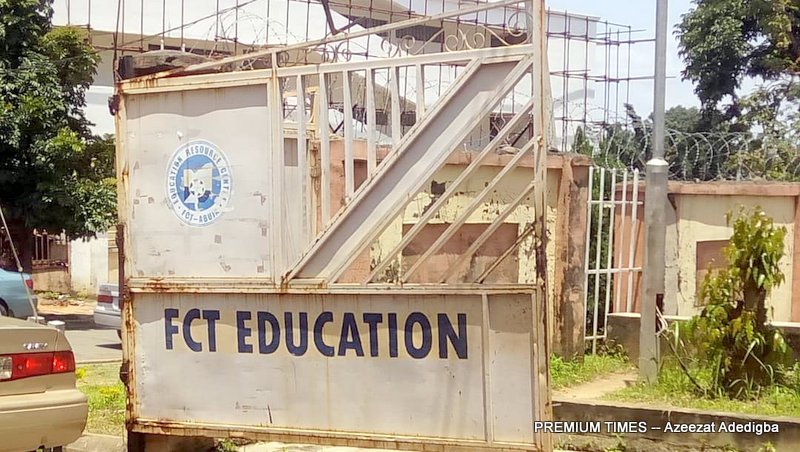 Days after the Federal Capital Territory (FCT) Education Board officially ended the sale of student admission cards, employees of the board continued to secretly sell the cards at a premium rates to Nigerians, PREMIUM TIMES can report.

Education Resource Centre (ERC) is responsible for the sales of the scratch-cards for students seeking transfer across secondary schools in the FCT or from other states.

ERC coordinates the movement of students from junior to senior secondary schools based on results students obtained in the JSS exams conducted by the centre.

Those seeking transfers are required to buy the security cards that contain secret passcodes they need to access the ERC site, download and print out a form and then submit it to the centre for processing.

On Tuesday, the agency announced the sales of the scratch-cards but also ended the sales on the same day, catching many interested parents unawares.

Keystone Bank in Wuse Zone 1, Abuja was the authorised point for purchasing the card, this newspaper learnt.

However, when PREMIUM TIMES visited the agency two days later on Thursday after the bank had stopped the sale, our reporter observed workers were making quick businesses selling the cards but only to those who can pay a higher fee for it.

The official price of N2500 is inscribed on the scratch card, but a staff “helped” our reporter obtain one for N4000 that day.

The staff who refused to give her name or contact, requested the money in cash. When our reporter pleaded to do electronic cash transfer, however, the worker accepted and the transfer was made to her bank account.

However, most parents who visited the selling point at the centre and the authorised bank were informed the cards had finished.

The closure of sale of the admission cards generated controversy as many parents travelled from other states to the FCT to get the scratch cards for their wards.

Most of the parents who could not purchase the admission cards were those seeking transfer of their wards from other states to start senior classes in government secondary schools in Abuja.

An official of the ERC who asked not to be identified said limited number of spaces was the major factor responsible for the difficulty in processing transfers to schools in the FCT.

“There are no spaces for children in the schools, my dear. We are working on it. Are you aware that some parents nearly mobbed the director on Tuesday? We are addressing that issue. The director has been attending a series of meetings to resolve the issue,” the source said.

There are parents who processed the transfer of the wards smoothly.

Ebenezer Aluko, a parent who was at the centre to submit his ward’s completed form, said the officials asked him to submit it and his phone number and that they would contact him later.

“The junior WAEC result came out last week and my son passed. He will be going to SS1 but I want to change the school,” he said.

Mr Aluko said he was not charged anything extra apart from the fee paid for the scratch card.

“We paid for everything during the Junior WAEC examination. I went to my school to pick the scratch card last week,” she said.

At the ERC office, the processes were largely hitch-free for students from public schools as they were completed within 15 minutes.

But for others, things did not go so well. A PREMIUM TIMES reporter who posed as a relative of an applicant, observed how staff offered to sell the cards for more money, and especially to those they believed they had ethnic connections with. Such beneficiaries were those able to speak some local languages.

In one case, a parent who introduced himself as ‘Oga Daniel’ decided to wait after a student advised him to speak a local language with an official there.

“Someone is already helping me to get the card o. I wished I knew her before now, I have given her the N4000 but she said she is coming,” he said.

Mr Daniel offered to talk to the official after he got his card. The official said she was only helping and offered to also “help” the reporter. Meanwhile, other parents scurried about with their wards hoping to also find a way out of their dilemma.

“Oya, bring your money, I don’t want transfer but I will help you. I am not the one selling it but I will get it for you,” the official told our reporter.

Parents who spoke to PREMIUM TIMES said they preferred government schools in the FCT for their wards because the schools are of the same standards with federal government colleges across the country.

Some of the parents said they were transferring their wards from private schools in their states to government schools in FCT for quality education.

A parent who identified himself as Nzo said it was an act of wickedness for the agency to sell the transfer cards for just one day.

“Most of us here don’t know our fate. I came from a neighbouring state to purchase a transfer form for my daughter but they are saying till October ending. This means that she will be at home till then. How can they sell the form for a day? What are we going to do? This is how the masses suffer in Nigeria,” he said.

“My concern is for my child to get this transfer and resume early, I don’t want her to miss much,“ she said.

“We all know this a normal thing now, the government will frustrate those coming in from private schools now, but they are yet to do anything about the ones from public schools too. I will just advise the parents to be patient and talk to the officials to help them,” another parent, Mrs Kalu, said.

Mrs Kalu said the centre was yet to process the admission of junior students from public schools to senior secondary schools.

The printout of the senior school posting form sighted by our reporter said students would forfeit their admission if they fail to resume SS1 before September 30.

The spokesperson of FCT Education Board, Tony Ogunleye, said only the bank was authorised to sell the student admission card.

According to him, the ERC sold the scratch cards to the bank.

“The scratch cards care not meant to be sold outside the banks and if that is done, it is illegal. We are very much interested to know who is doing it and sanction them,” he said.

“This is barbaric and high level of corruption that we must not allow. Children cannot enjoy access timely and quality education because of some corrupt officials undermining the effort of this administration to ensure that children go to school timely”, Hamza Lawal, the executive director of Connected Development said.

Mr Lawal said the perpetrators must be sanctioned and forms must be made available for the masses.

“We must not allow this and we must prosecute them. In doing this, we must summon the system and the process The process must be made simple, transparent and easily accessible so that people will not pay above their means and government will not lose the money they are to generate,” he said.

“I believe that the Education Secretary should be held accountable for this. The Minister of Education, Adamu Adamu, and Minister of FCT, Muhammad Bello should live up to expectation and constitute a panel to investigate this matter and make life easy for citizens,” he said.

Similarly, the Education Right Campaign (ERC) described the situation as another sad case of corruption and nepotism in the system which must be condemned by all right-thinking people.

The national coordinator of the group, Hassan Soweto, said admissions ought to be fair and merit-based if the goal of education is to be achieved.

“Hoarding and other sharp practices which confer undue advantage on a few have grave implications for the overall goal of education and this is why this development must be treated with all seriousness by the appropriate authorities,” the group said.