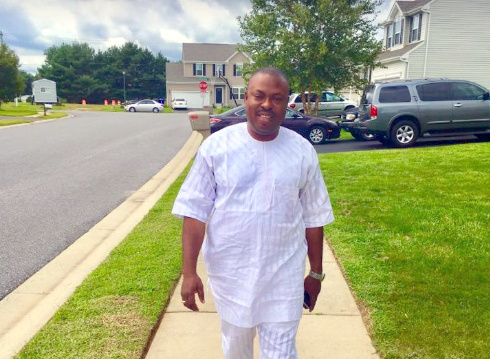 Timothy Owoeye, an Osun State lawmaker seen on a viral video depicting him as bathing in the market square for ritual, was a victim of a ritual syndicate which had operated in the state for a long time, the police have told PREMIUM TIMES.

Little was known outside of Osun State about Mr Owoeye until a video showing him being beaten by some men who purportedly caught him taking a midnight ritual shower in a market hit the Internet this weekend.

Some of those who circulated the video on social media said Mr Owoeye, who is currently the House Majority Leader of Osun State House of Assembly, was performing the ritual as he intensified activities towards his political success in the upcoming general elections.

But Mr Owoeye, representing Ilesa West for the All Progressives Congress, was actually a victim of a high-wire blackmail racket that had seen him part with humongous amount of his personal wealth in a desperate bid to save not only his own career but family image, Osun police commissioner, Adeoye Fimihan, told PREMIUM TIMES Sunday afternoon.

“The fellow is a victim of some fraudsters who duped him some amount of money,” Mr Fimihan said by telephone. “They tricked him to that place and did that to blackmail him so that he will not be able to lodge complaint in the public.”

Mr Owoeye’s misery began about six months ago when he agreed to have a midnight shower in a market as recommended by herbalists he had been consulting for traditional prayers. The location is rumoured to be Osun Jela, described as a lull community between Osogbo, the state capital, and Ijesa.

But as he undressed himself and started having his shower, some persons — whom the police suspect had been lurking in the dark— emerged from the nearby bush, turned on lights and focused cameras on the lawmaker.

PREMIUM TIMES learnt from sources close to Mr Owoeye that persons were arranged by the fraudsters who had been parading themselves to the lawmaker as herbalists working to help enhance his fortunes through traditional means.

They syndicate promised not to circulate the video if Mr Owoeye complied with their demands for cash. He paid the initial cash to the crooks, which subsequently opened a cascade of regular financial flows to their pockets.

At some point during the blackmail, about three months ago, Mr Owoeye wanted to sell a filling station he owned after running out of liquid cash to keep hushing his so-called scandal.

“He did not sell the filling station, but he had paid them more than 40 million before then,” the source said. It was when Mr Owoeye was trying to raise money by selling his filling station that an associate pressed him to disclosed what his crisis was about. He was then asked to advised to take the matter to the governor and subsequently to the police.

“We are happy that he summoned the courage to complain and the police succeeded in arresting some of those fellows and they were charged to court,” Mr Fimihan said. “Whatever is being circulated is just a way of ensuring that he will not be able to complain.”

The commissioner said he could not immediately tell how much Mr Owoeye lost to the scheme, but the police had recovered N10 million of it already.

“I cannot say precisely now, but the police were able to recover N10 million of the funds he was swindled,” the police chief told PREMIUM TIMES.

Both the commissioner and Mr Owoeye’s associate told PREMIUM TIMES the video was leaked by other members of the syndicate who were yet to be taken into custody.

Mr Owoeye could not be reached for comments. It was also not immediately confirmed whether the arrested suspects had hired their legal representatives.

Ritual prayer by fake herbalists is a booming trade in which unsuspecting citizens lose billions across Nigeria annually, and the police have spent years combating its spread by regularly smashing hideouts of syndicates.