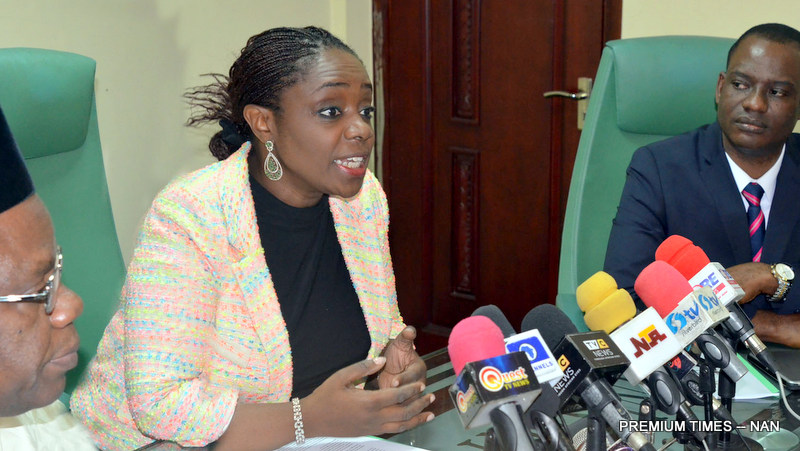 Former Nigerian finance minister, Kemi Adeosun, who resigned her position on Friday on account of forging a certificate of national service risks jail term of up to 14 years.

A lawyer, Shuaibu Sule, listed five offences he said the minister is liable for.

They carry jail terms of between one to 14 years, according to the Penal Code Law and the National Youth Service (NYSC) Act.

Mrs Adeosun’s certificate scandal was first blown by PREMIUM TIMES in a July 7 story which detailed how the minister skipped the mandatory national service and forged an exemption certificate to cover for it.

The year-long service, organised by the NYSC is compulsory for all Nigerians who graduate from a university or equivalent institution at the age of 30 or below.

On Friday, the Presidency announced her resignation from office, and released the resignation letter in which Mrs Adeosun owned up to the crime. She said she was “helped” by some unnamed associates to get the exemption certificate.

“Her resignation should not be the end of it. She should be investigated and prosecuted for committing a number of crimes,” Mr Sule told PREMIUM TIMES Saturday morning.

The lawyer said Mrs Adeosun could be charged for offences under Section 140 of the Penal Code, which borders on giving false information and attracts up to one year prison term and/or fine.

What The Law Says

The penal code operates in the northern part of Nigeria, including Abuja. While Mrs Adeosun is from Ogun in the south, lawyers say the law would apply as the offence was committed in Abuja.

Sections 364 and 368 of the same law, according to Mr Sule, provides for up to 14 years in jail for faking a document and being in possessing of fake documents. They also have provision for fine that could go either as complement of substitution for jail term.

Mr Sule said the former minister is equally liable for uttering – presenting fake document as genuine, which could, on conviction, could attract maximum jail term of 14 years, as provided for in Section 366 of the law.

Eligible Nigerians who skipped the service are liable to be sentenced to 12 months imprisonment and/or N2,000 fine, according to the section 13 of the NYSC law.

Section 13 (3) of the law also prescribes 3-year jail term or option of N5,000 fine for anyone who contravenes provision of the law, as Mrs Adeosun is alleged to have.

Subsection 4 of the same section also criminalises giving false information or illegally obtaining the Service’s certificate. It provides for up to three year jail term for such offenders.

The lawyer said a level playing field should be provided to bring the former minister to justice.

Civic groups have written to law enforcement agencies to demand for Mrs Adeosun;s investigation and prosecution.

Prior to her resignation, a Lagos-based Civil Society Organisation, HEDA Resource Centre, had written to the Inspector General of Police in July asking him probe the forgery allegations against the minister.

In August, the group the police authorities to the court asking for order compelling the police to investigate the scandal. The matter is yet to be heard.

Mrs Adeosun graduated from the Polytechnic of East London in 1989, at the age of 22. By her curriculum vitae, Mrs Adeosun was born in March 1967.

The institution changed name to University of East London in 1992. Mrs Adeosun has her certificate issued in the new name.

By graduating at 22, it becomes obligatory for Mrs Adeosun to participate in the one-year national service, for her to qualify for any job in Nigeria.

However, at the time of her graduation, the young Folakemi Oguntomoju, as she then was, did not return to Nigeria to serve her fatherland.

She landed an immediate job at with British Telecom Company, but left after a year to join Goodman Jones, an accounting firm and investment firm, as audit officer. She served there until 1993.

In 1994, Mrs Adeosun joined London Underground Company as Internal Audit Manager, and switched to Prism Consulting, a finance firm, from 1996 until 2000.

In 2000, Mrs Adeosun got hired by reputable financial services firm, PricewaterhouseCoopers, where she worked for two years.

When she finally returned to the country in 2002, Mrs Adeosun worked with a private firm, Chapel Hill Denham, without evidence of national service.

However, for reasons that not clear, the finance minister purportedly obtained an exemption certificate dated September 9, 2009, just before she left Chapel Hill for another firm, Quo Vadis Partnerships and managing director. It is unclear of Mrs Adeosun owns, or is a director of the latter company, as she assumed duties directly as the managing director of the firm in 2010.

On return to Nigeria, Mrs Adeosun served in four different positions, including her current post as the minister of finance. By the provision of Section 12 of the NYSC Act, employers must demand for the NYSC certificate of prospective employees. The law also mandates employees to present a genuine certificate for that purpose.

Section 12 of the Act reads:

“For the purposes of employment anywhere in the Federation and before employment, it shall be the duty of every prospective employer to demand and obtained from any person who claims to have obtained his first degree at the end of the academic year 1973-74 or, as the case may be, at the end of any subsequent academic year the following:-

a. a copy of the Certificate of National Service of such person issued pursuant to section 11 of this Decree

b. a copy of any exemption certificate issued to such person pursuant to section 17 of this Decree c. such other particulars relevant there to as may be prescribed by or under this Decree.”

A legal practitioner, Sagir Gezawa, described jobs Mrs Adeosun has had in Nigeria as illegal.

“The combined effect of sections 12 and 13 of the NYSC Act is that it is illegal to hire a person who had graduated but without making himself or herself available to serve, or falsify any document o the

effect that he has served or exempted from serving”.

However, without demanding or verifying the veracity of the certificate brandished by Mrs Adeosun, two companies, the Ogun State government and the federal government employed her at various times.

Mr Amosun is believed to have used his well-known relationship with President Muhammadu Buhari to impress on him to pick Mrs Adeosun as his finance minister, following the ruling APC victory in 2015.

In November 2015, Mrs Adeosun was sworn in as minister by Mr Buhari, and assigned to the all-important finance ministry, after a supposed state security and National Assembly screening.

SPECIAL REPORT: How children battle for survival in Oyo capital

FOR THE RECORD: Full text of Kemi Adeosun’s resignation letter