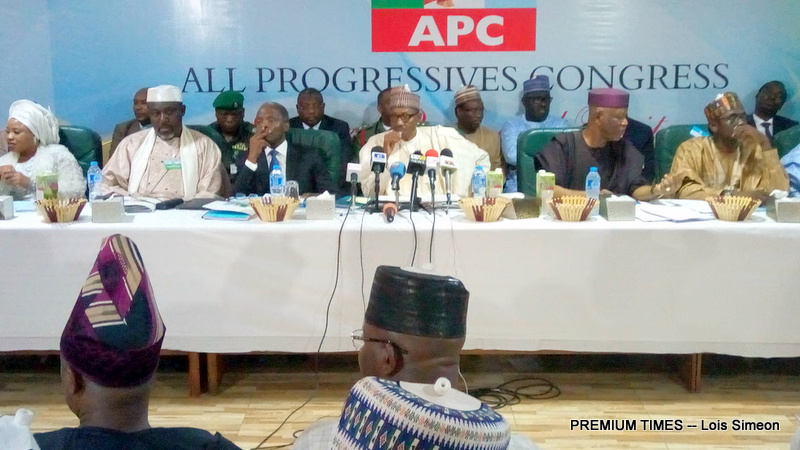 Buhari’s refusal assent to the Electoral Bill, Release of timetable for APC primary elections/nomination fees, adoption of indirect primaries by APC in the states, Shekarau’s defection, others dominate political scene

The refusal of President Muhammadu Buhari to assent to the 2018 electoral bill, adoption of mode of primary elections by APC in states, former Governor Ibrahim Shekarau’s defection from PDP to APC, David Mark and Donald Duke’s declarations for the presidency were some of the major political events in the country last week.

Some state chairpersons of the All Progressives Congress (APC) met in Abuja over the decision of the party to adopt direct primaries for all elective positions in the states.

The ruling party, at its National Executive Committee meeting the previous Thursday resolved to adopt direct primary for the election of its presidential candidate and direct primaries at the state level.

The meeting followed a clarification the previous day by the APC that agreement was reached on direct primaries to select its candidates for the presidential, governorship, national and state assemblies in 2019, a development which some state governors were not comfortable with.

The chairpersons resolved to resist the option of direct primaries in their states.

They met to challenge the decision despite an earlier warning in a statement by the APC acting spokesperson, Yekini Nabena, that the meeting was illegal.

The party chiefs, following the warning, changed the venue of the meeting from Transcorps Hilton Hotel to Barcelona Hotel in the nation’s capital.

Most APC state chapters have since adopted indirect primaries, contrary to the wish of the NEC.

In what many watchers of Nigeria’s democracy described as a possible setback for the coming general elections, President Muhammadu Buhari declined assent to Electoral (Amendment) Bill 2018 due to “some drafting issues” that remain unaddressed following the prior revisions to the bill.

Ita Enang, the Senior Special Assistant to the President on National Assembly Matters (Senate), disclosed the president’s action and discomfort in a statement in Abuja.

Mr Enang said the president had already communicated his position to the Senate and the House of Representatives on August 30.

“Mr President is declining assent to the Electoral Amendment Bill due to some drafting issues that remain unaddressed following the prior revisions to the Bill.

“Mr President invites the Senate and House of Representatives to address these issues as quickly as possible so that he may grant assent to the Electoral Amendment Bill,’’ the presidential aide said.

The opposition party, PDP, later criticised Mr Buhari for not signing the bill.

On this day, Nigeria’s main opposition party, the Peoples Democratic Party (PDP) urged the National Assembly to use their constitutional power to override President Muhammadu Buhari on the Electoral Act 2010 (Amendment) Bill.

PDP made the call in a statement issued by its National Publicity Secretary, Kola Ologbondiyan, on Monday in Abuja.

The party said Mr Buhari’s veto did not come as a surprise, since his commitment to a free and fair 2019 election was “mere lip service”.

It said that it had become clear to Nigerians that the reasons adduced by the president for withholding assent to bills were “lame excuses”.

A former senate president, David Mark, picked the nomination form of the PDP to run for president.

Mr Mark, who represents Benue South at the Senate, joined a list of over a dozen aspirants to declare their intention to run for president on the PDP platform.

He is the fourth of his Senate colleagues to declare his intention to be Nigeria’s president in 2019.

The previous week, his colleagues, Senate President Bukola Saraki, Rabiu Kwankwaso and Jonah Jang separately declared their intentions to run for the same seat on the ticket of the PDP.

Mr Mark, the longest serving senate president in Nigeria’s history, explained that he wanted to be president in order to restructure the nation.

A former governor of Cross River State, Donald Duke, defected from the PDP to the Social Democratic Party (SDP) and said he would run for the office of Nigerian president on the latter’s platform.

Mr Osinbajo had spoken in the U.S. about restructuring not being Nigeria’s major problem.

He said it was surprising that Mr Osinbajo would take such a position and, in particular, fail to appreciate the connection between Nigeria’s defective structure and its underperformance.

In his response contained in a letter to the editor, the vice president said among other things that he rejected the notion that geographical restructuring was a solution to our national problems.

“I then argued that what we required now was not geographical restructuring but good governance, honest management of public resources, deeper fiscal Federalism, and a clear vision for development,” he said.

The APC released the timetable for its primaries ahead of the 2019 general election.

In the timetable signed by the National Organising Secretary of the party, Emmanuel Ibediro, the APC said the activities would commence with the sale of forms from September 5 to 10.

This will be followed by nationwide congresses on September 12 to elect delegates for other primaries except the presidential which will be decided by direct primary.

The group’s action came barely 24-hours after the formal announcement of dates for the APC primaries and fees for forms for various political positions by the governing party.

Mr Buhari was still in China on an official visit when the group paid the money.

The APC in Zamfara, Yobe, Plateau, Borno, Nasarawa and Sokoto States adopted indirect elections for the party’s primaries to select candidates for the 2019 general elections.

The party in Lagos, Kano and Niger settled for direct primaries.

However Kebbi and Ogun State chapters of the party opted for consensus selection of candidates for the elections.

A total of 82 out of the 91 political parties participated in the election.

The rivalry between the Osun PDP gubernatorial candidate, Ademola Adeleke, and his rival, Akin Ogunbiyi, was ‘settled’ with the signing of a peace pact.

The governorship election holds on September.

The process which led to the emergence of Mr Adeleke on July 21 generated a lot of controversies within the party and resulted in pro-Akinbiyi faction and pro-Adeleke faction of the opposition party.

The signing of the agreement between the duo was announced on Wednesday by the Senate President, Bukola Saraki, who heads the party’s campaign team for the gubernatorial election.

The Katsina and Kaduna States chapters of the APC resolved to adopt indirect primaries to pick the candidates for the various elective positions.

Furthermore, the meeting also agreed to raise money to donate to the president for his re-election campaign.

In Kaduna, the party said, “Experience of Direct Primaries from the recently concluded primary elections for councillorship in state where the party adopted direct primaries to select its candidates was marred by significant disruption and controversy and over stretched the security agencies. Using this mode for the upcoming primary elections would definitely not produce the desired results and its credibility may be called to question.

Earlier on Wednesday, Shehu Sani, the senator representing Kaduna central district, had joined some other aspirants in the state to write the APC National Chairman, Adams Oshiomhole, requesting that the state chapter be compelled to adopt direct primary mechanism which the party earlier settled for.

Violence erupted at the PDP national secretariat as supporters of former Vice President Atiku Abubakar, who accompanied him to submit his presidential nomination form, clashed with some thugs.

Mr Abubakar’s supporters arrived at the secretariat at about 9 a.m., drumming and dancing while waiting for him.

The aspirant arrived at about noon, and while submitting his nomination form inside the party secretariat, pandemonium erupted as some persons suspected to be political thugs attacked his supporters.

The development caused chaos as people scampered for safety, causing stampede at the secretariat main entrance as the supporters, especially women tried to rush into the premises.

The situation was, however, brought under control following the intervention of policemen who promptly fired gunshots into the air to dispel the thugs.

The PDP later accused the APC of sponsoring the thugs.

The Independent National Electoral Commission (INEC) said the voting population had risen to 84,271,832.

The Commission’s chairman, Mahmood Yakubu, also said at the regular meeting of the commission with the Resident Electoral Commissioners (REC) in Abuja that it will print 16,500,192 Permanent Voters’ Cards (PVCs) and make them available for collection by citizens ahead of the 2019 general elections.

A former Kano State Governor, Ibrahim Shekarau, incumbent governor, Abdullahi Ganduje and the National Chairman of the APC, Adams Oshiomhole, met in Kano to put finishing touches to his (Shakarau) official defection from the PDP.

Mr Shekarau received the two men at his residence at Mundubawa Avenue, Kano.

His spokesperson, Ya’u Sule, had earlier said on Tuesday the former governor was returning to the party he left for the PDP just before the 2015 general elections.

But the following day, Mr Shekarau refuted the claim of his spokesperson, saying he was still consulting with his supporters.

The Governor of Ekiti State, Ayodele Fayose, hinted why he is no longer interested in running for president in 2019.

The outgoing governor spoke in Ado Ekiti on Friday while receiving a presidential aspirant of the Peoples Democratic Party, Musa Kwakwanso, who was in the state to seek the support of Ekiti delegates.

“As a good leader, I cannot abandon my loyal deputy whose mandate was stolen by the APC and be pursuing another ambition,” Mr Fayose said.

“My posters are there in a room. I am committed to the recovery of the mandate.”

The back and forth of former Kano State governor, Ibrahim Shekarau, over his political future ended as he has formally defected from the PDP to the APC.

Mr Shekarau declared his much anticipated defection at a meeting with loyalists held at his Mundubawa avenue residence on Saturday.

Mr Shekarau said the main reason for taking this decision is due to the concession of 51 per cent of the party’s leadership structure from state to ward level to a presidential aspirant, Rabiu Kwankwaso, who recently decamped to the party.

Kingsley Moghalu, a former deputy governor of the Central Bank of Nigeria, emerged the presidential candidate of the Young Progressive Party (YPP).

Mr Moghalu emerged after a delegates’ election at the party’s first national convention and presidential primaries in Abuja.

Mr Moghalu obtained 243 votes from 253 accredited delegates to beat his only opponent, Donald Igwegbu, who stepped down for him.

Mr Igwegbu, announcing his decision to step down, said he took the decision not because he was not qualified to contest in 2019 but because Mr Moghalu shared the same vision with him.

Mr Saraki named a lawyer, Ilemona Onoja, as the spokesperson for his campaign.

The director general of the Bukola Saraki Campaign Organisation, Mohammed Wakil, made the announcement in a statement Saturday.

Mr Wakil explained that Mr. Onoja attended the Benue State University, Makurdi, the Nigerian Law School, Lagos campus, and was called to the Nigerian Bar in 2006.

Lagos govt warns against use of asbestos in homes