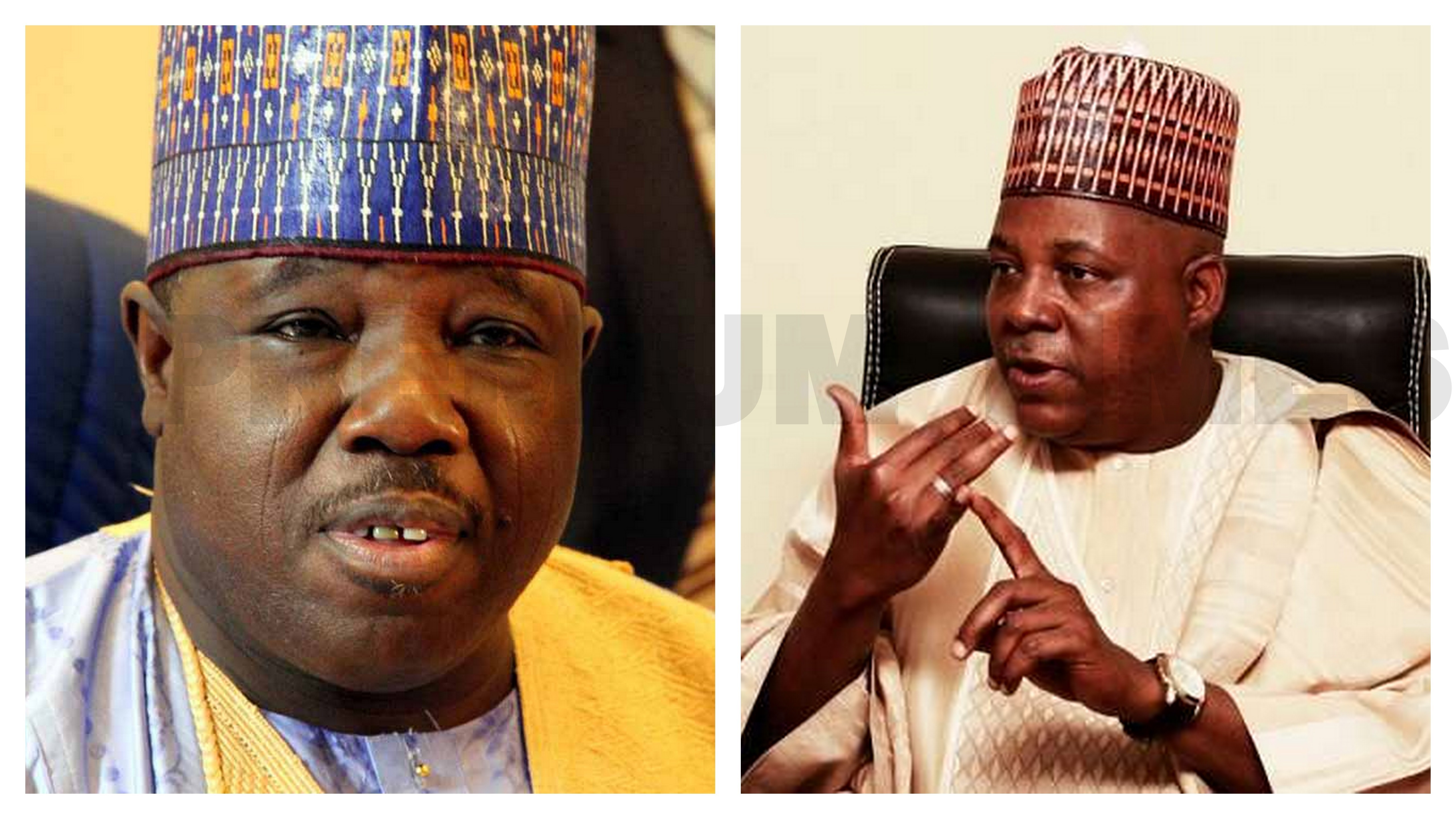 All is not well with the ruling All Progressives Congress (APC) in Borno State as Governor Kashim Shettima and his erstwhile political godfather-turned arch-enemy, Ali Modu Sheriff, appear ready to fight dirty ahead the party’s primaries.

The party has of late demonstrated that the peace accord it signed to usher in founding members who defected but returned to the party, was a cosmetic arrangement.

State officials of the party on Sunday accused the former governor, Mr Sheriff, of carrying out “illegal registration” and issuance of membership cards across the state.

The APC state secretary, Bello Ayuba, described the alleged action as an insult to the party and the person of President Muhammadu Buhari.

Top amongst those the party welcomed back in Maiduguri early this year was the former national chairman of the Peoples Democratic Party (PDP), Mr Sheriff, who is also a former governor of the state.

Mr Sheriff left the newly formed APC in 2014 as a fallout of the acrimonious relationship he had with Mr. Shettima, whom he assisted to power in 2011.

On April 4, Mr. Sheriff made a grand return to the APC when he led some former members of the PDP back to his former party and was received by the governor and other party supporters at Government House, Maiduguri.

At the reception, Mr Sheriff said he was returning to the party for good and urged his supporters to queue behind the state government led by his successor, Shettima.

Soon after, the former PDP national chairman picked up the job of campaign coordinator for President Muhammadu Buhari’s 2019 reelection bid – a job on which he has since rolled out all his political arsenal to deliver at all cost.

Two weeks ago, the state governor had during a luncheon to mark the last Eid-el-Kabir celebration, delivered a speech that revealed a division within the ruling party. He accused those he called Abuja politicians of trying to undermine his authority especially as it concerns who would succeed him come 2019.

The governor urged the party stakeholders that are loyal to him to forge a more united rank in order to quash the plots of the so-called Abuja politicians whom he accused of trying to bring “political insurgency” to the state.

While the state is grappling with the governor’s new war path with the Abuja politicians, amongst whom is Mr Sheriff, the party on Sunday came up with the accusation of illegal registration of party members.

Those familiar with the budding conflict within the APC said the former governor was promoting the registration of new members ahead of the APC congress. He is being accused of trying to orchestrate the emergence through direct primaries of a governorship candidate not supported by the governor.

The party’s officers in the state insisted that the registration was illegal and capable of throwing the state into chaos and even undermine the reelection bid of Mr Buhari.

“The All Progressives Congress, APC, has uncovered an illegal registration of APC members and prospective voters by a suspicious group of persons in Borno State who are acting a hidden agenda that aims to undermine President Muhammadu Buhari’s reelection bid,” the statement signed by the party secretary said.

“The APC is calling on all its members across the 27 local government areas to disregard any registration exercise for now because the exercise has nothing to do with the APC national headquarters and the state level.

“Our party officials have been receiving calls from members saying they had come in contact with some people who claim to be officials undertaking registration of APC members in Borno State as well as registration of citizens who intend to vote for President Muhammadu Buhari.

“The APC views any so-called registration of Buhari’s supporters in Borno State or any part of Nigeria as an insult to President Buhari because from the 2015 elections, Buhari won 97 percent of the total votes cast in Borno State and as such registering his supporters under any guise in Borno State is clear disregard for Buhari’s popularity.

“A group of persons currently undertaking an illegal registration are trying to mislead people by collating their names for a purpose that has hidden motive.”

The APC said it was aware that “a particular individual who is yet to register his return to the APC at the ward level,” was behind “the illegal registration exercise even while the same individual is known to have provided a venue to a PDP presidential aspirant who visited Maiduguri recently and used that venue provided by the so-called returnee for the purpose of raining abuses on President Muhammadu Buhari.

“We assure the APC that the party is 100 percent behind President Buhari and the party will work totally for Buhari the same way it did in 2015 when the so-called new returnees did everything to undermine Buhari’s election while they were in PDP.

“The APC called on security agencies in Borno State to take note that any registration of members is illegal and is capable of causing violence across the State.”

The party urged its members to remain peaceful, law abiding and not to take laws into their hands for whatever reason.

A party chieftain who spoke to PREMIUM TIMES but wished not to be named expressed worry that the current happenings in the party may not augur well for the party ahead the 2019 elections.

“Whether we like it or not, our party is gradually sliding towards forming a faction and this will not be good for us,” said the top officer.

The officer said he had also confirmed the alleged registration of APC members.

“The registration is going on despite the call by the party secretary for the police to stop the exercise. In most part of the southern Borno, like Biu and Hawul over 15, 000 persons have been registered so far,” he said.

“This is all about the direct primaries thing that the party may likely use in selecting the governorship and national assembly candidates this month. And going by the speech of the governor during the Sallah celebration, it is clear that he is at war with the former governor, Ali Sheriff as well as those top politicians from the state who are in Abuja.

“Former Governor Sheriff has clearly told his supporters that his job in the state and the zone is to work for Buhari and no one else; his alleged call for registration of voters in the state may be part of his plot to ensure that a governorship candidate believed to have been endorsed by Abuja politicians who have the ears of the president emerges through direct primaries; and governor Shettima seemed not happy with that,” he said.

Also speaking on the matter , Christopher Akaba, a Senior Special Assistant to Governor Shettima, described Mr Sheriff as an “hypocrite”.

“I am not surprised because the much talked about 2019 general elections is almost around the corner and just like 2015, we would be seeing politicians who completely abandoned us returning home, to, in their words, “rescue” the state,” Mr. Akaba posted on his official Facebook page.

“Some of them who even designed, plotted and perfected the strategy of imposing a long term hardship to the people for their selfish and economic interests, are also claiming to be on a rescue mission.

“At the centre of this agitations is no other person than Emperor Ali Modu Sherriff, the so-called Political Gladiator, Godfather and the Alpha and Omega of Borno Politics.”

“For here was a man, (a member of the PDP then) who ganged up with the PDP controlled federal government at the centre in 2015, to frustrate the APC administration in Borno State led by Governor Kashim Shettima by ensuring that not only were soldiers attached to Governor Shettima withdrawn but the governor humiliated by being deprived of using the Maiduguri International Airport, while the same Sherriff (an ex-Governor) was allowed free access to the airport, including full military escorts and protection,”said Mr Akaba.

Reacting to the allegation, the Special Assistant to Mr Sheriff, Kolo Adam, in a statement titled “When Ignorance Takes A Lead”, said the alleged membership registration was a mere online registration of President Buhari’s supporters.

Mr. Adam took a swipe at the leadership of the APC in Borno State, whom he said had lack knowledge and understanding of the art of leadership.
His fullfull statement reads:-

“Reports reaching my desk indicated that supporters of Governor Shettima in Borno State are not happy with the ongoing online APC membership registration for the support of President Buhari’s 2019 second term bid, which signifies that direct primaries is inevitable in Borno State.

“Thus, they went round discouraging the members of the public who trooped out in mass and cued to register their support. Some of them issued a threat but was disregarded by the people. Allegedly, they went behind the doors and connived with the national secretary mai Mala Buni who was said issued an unauthorized letter discrediting the exercise.

“Unfortunately it is on record that the state chairman of APC Ali Tablet (what a name) previously issued a press statement (as attached) over the membership registration stating clearly that there is online registration in the APC constitution, where he said “I want to draw your attention to the relevant section of the APC Constitution that deals with eligibility for Membership: Article 9.1 of the APC Constitution (October 2014 as Amended): Section ii; ….. Online registration shall also be acceptable provided that it is cleared by the National Working Committee of the Party…..”

“However, it is for this provision and the recent pronouncement by the NWC that the party is calling on Nigerians to register with the APC online so that they can become part of the decision making body in the party when it comes to giving their mandate to President Buhari and others.

“Where then on earth the state chapter has the right to claim or cry foul that it is the duty and responsibility of the state that others are handling without their consent. Does it mean that they are superior than the NWC?

“Any way all the above is history now that a state will be determine by its “PECULIARITY” as to DIRECT or INDIRECT PRIMARIES. And Shettima since flew out of the country to attend a meeting in Dubai, which the agenda is left for the Kashimiyas.

“Thank you BUHARI, thank you OSHIOMHOLE and thank you SAS.”