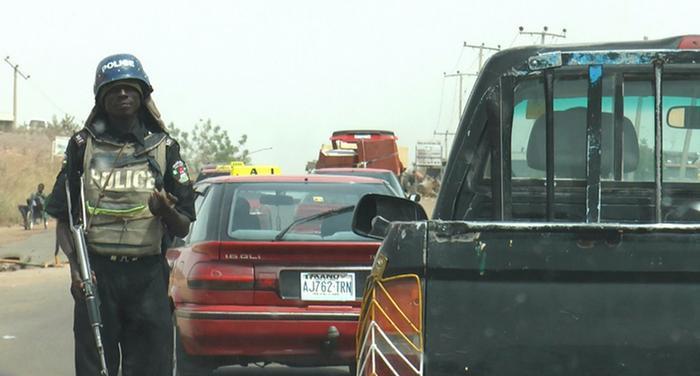 A Nigerian Police officer on the checkpoint

A driver in Taraba State was killed allegedly by a police officer over N50 bribe, a witness said.

The witness, who does not want his name mentioned, identified the victim as Mohammed Dajji.

The incident happened at a police check point in Maisamari village, Sardauna Local Government Area of the state. Maisamari is about 70 kilometres from the local government headquarter, Gembu.

The incident happened at about 11:30 a.m. Friday, PREMIUM TIMES learnt.

Mr Dajji, who drove an old Peugeot 504 for public transport, reportedly indicated willingness to pay but said he had only “N40 change,” the witness said.

Angered by his statement, the police officer descended on him with a stick, beating him until he fainted.

The victim was subsequently rushed by passengers and observers to a hospital in nearby Nguroje where he died while being treated.

The late Mr Dajji left behind 15 children and three wives. He has since been buried according to Islamic rite.

A resident of the community, Umar Sanda, while speaking on the incident, advised security agencies to only send well trained personnel to the area.

Mr Sanda, the local government party chairman for the All Progressives Congress in Sardauna local government, said the area, being part of the larger Mambilla Plateau is tense based on a history of violence..

A neighbour to Mr Dajji, Alhaji Ikom, described the incident as unfortunate.

He said he has been a neighbour to the victim for many years and cannot recall seeing him quarrel with anyone.

“This death is just like a calamity that befall this community,” Mr Ikom said.

“He is man gentle man to the core, you can see all people at Nguroje community across tribes are pouring into his residence to register their condolences. I hope government will do something to avoid a recurrence of such.”

David Misal, police spokesperson in Taraba, said the information he has is sketchy. He promised to get back later but was yet to do so at the time of this report..

When contacted, the Taraba State Police Commissioner, David Akinremi, replied to a text message saying, “You’ve done your publication why the message?”