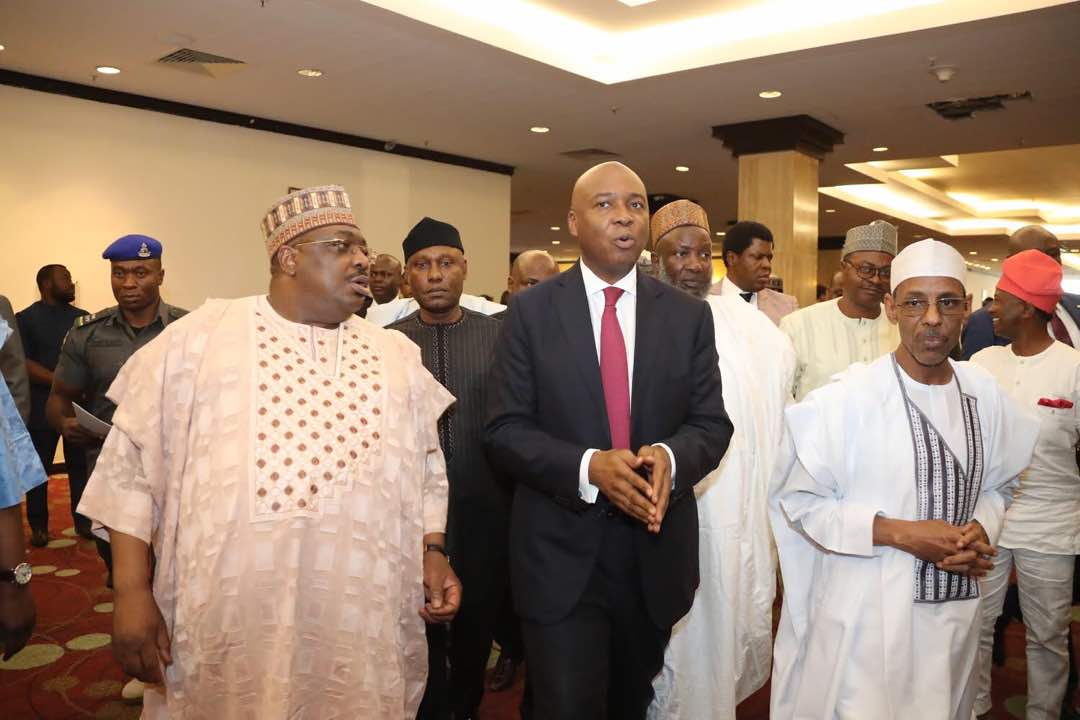 This came about 24 hours after his Senate colleague, Rabiu Kwankwaso, also declared to run for the same office at an elaborate rally in downtown Abuja.

Messrs Saraki and Kwankwaso are among about a dozen presidential aspirants of the main opposition party, PDP.

Mr. Saraki made his declaration at a public dialogue organised by the #NotTooYoungToRun Movement, a youth-based group that successfully lobbied for the passage of a new law that reduced the age of qualification for political office across the country.

The event, themed: “Youth Candidacy and the Future of Nigeria Beyond 2019”, is a series of political engagement aimed at broadening the political participation of young Nigerians ahead of the elections next February.

Leaders of the Peoples Democratic Party (PDP) were invited as part of the series on Thursday, with Mr Saraki being asked to deliver the keynote.

“Your generation does not deserve to live in the poverty capital of the world,” Mr. Saraki said to a cheerful audience.

He promised to lead the fight against poverty and employ every God-given resource available in turning things around.

“I am determined to grow Nigeria out of poverty. We will stimulate the growth of Small and Medium Enterprises (SMEs) as one of the ways of energising the economy and to create wealth for our people, especially the youth.”

But the shocking aspect of the appearance came when the Senate President declared his intention to run for president.

“I have decided to answer the call of teeming youth who have asked me to run for President,” he said.

“Accordingly, I hereby announce my intention to run for the office of President of the Federal Republic of Nigeria in the coming General Elections in 2019 on the platform of the People’s Democratic Party (PDP).

“I do so with the firm conviction that I have what it takes to secure inclusive growth for Nigeria and Nigerians.”

Mr Saraki had been rumoured as a potential 2019 aspirant for several weeks, making Thursday’s pronouncement more ceremonial than remarkable.

Still, the organisers of the event, who had long maintained a non-partisan posture in their advocacy, expressed strong reservations about the optics of a politician using the platform to declare political ambition.

Specifically, they feared the development could cast the Not Too Young to Run Movement as a closet political action group, and even linked to the PDP at worse.

“The movement wishes to express its disappointment with Senator Saraki for usurping a platform designed for young aspirants to dialogue with party leadership to advance his personal political ambition. We strongly condemn this act by the President of the Senate and dissociates ourselves from this political move,” the organisers said in a statement sent to PREMIUM TIMES by the convener, Samson Itodo.

Mr. Saraki used the remaining parts of his interaction to knock President Muhammadu Buhari for being selective in his administration’s anti-corruption efforts.

“Ours will not be a selective fight against corruption. The emphasis will be on strengthening institutions, with a particular focus on deterrence.

“We cannot afford to compromise our institutions with proxy wars against perceived political opponents. We see the fight against corruption as crucial to Nigeria’s economic development.”

He decried what he described as Nigeria’s broken economy which he said is in need of urgent revival in order for Nigeria to grow.

“GDP growth rate has declined. Diversification remains an illusion. Unemployment is at an all-time high. Businesses are shutting down. Jobs are being lost in record numbers, and the capital needed to jumpstart our economy is going elsewhere.”

He promised to run a youth inclusive government at all levels, including the private sector and in every area of Nigerian life.

“This will be a government driven by youthful energy, innovation and a pioneering entrepreneurial spirit.

“Nigerian youth will be given all the opportunities to realise their potential to the full within a national framework that guarantees inclusiveness.

“For youth who have ideas and capacity, we will make sure that there is funding for their ventures; and we shall build on the Made in Nigeria legislation as part of our job creation drive.

“I have deliberately chosen the opportunity of being here with you, my Number One constituency who I see as the future of our great country, to make my intention known.

“I believe the Nigerian youth are critical to rebuilding and growing the economy, and restoring our national pride.”

Notable persons at the declaration were his Senate colleagues, Philip Aduda, Suleiman Hunkuyi, Dino Melaye and Mathew Urhoghide. Some members of the House of Representatives and Mr Saraki’s political associates from Kwara State were also present.

Mr Saraki is running for president in the 2019 elections on the platform of the PDP where he was a member before the 2015 elections.

He defected to the ruling All Progressives Congress (APC) in 2014 and later rejoined the PDP in 2018.

He will be slugging it out with other major PDP aspirants like former Vice President Atiku Abubakar, Governors Aminu Tambuwal of Sokoto and Ibrahim Dankwambo of Gombe, ex-governors Sule Lamido, Attahiru Bafarawa and Rabiu Kwankwaso, among others.

Buhari’s comment on rule of law ‘an advance warning’ — Soyinka